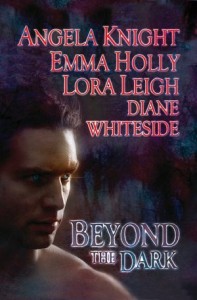 Dragon Dance by Angela Knight. Arial Dean arrives on the scene to negotiate a hostage situation with a newly transformed “Hyper” who is holding his wife and children hostage. Hypers are humans that are infected with some alleged demonic spirit. Arial takes down the Hyper but becomes infected in the process. The hostage negotiation with the Hyper doesn’t look good and so the team calls in Josiah aka Tracker. Tracker is a Hyper who serves as an FBI consultant when they need him to come in and kick some ass.

The worldbuilding is a bit of a mess. The reader jumps from learning the bare details about Hypers to the existence of some alien inhabitants. Then there is the ick inducing (for me) scenes that involve Arial’s lovemaking with the tiger spirit being of Tracker which turns Tracker on and Arial being fondled in return by the ghostly fingers of the spirit that inhabits Tracker. The complicated world building simply had no time to develop in this shortened space and it bordered too closely on the beastiality theme for my taste. I also wondered that since the gender of these animals/aliens that inhabit Arial and Tracker both turn out to be male whether she was having a four-some or whether the two alien inhabitants had a side relationship. Was that a detail conveniently ignored or simply overlooked? C-

Caught by the Tides by Diane Whiteside

This was a surprise for me because I found your previous work to be marked with purpley prose and overwrought metaphors. While there is still a heavy dependence on metaphors and repetitive descriptors (I counted more than five derivations of the term “rip open/rip apart” in this short story), there was an interesting mythology.

In a take off of Naomi Novik’s retelling of the Napoleon battles to include dragons, your story involves mages, both French and English, warring against each other on behalf of Napoleon and the crown respectively. Owen Bentham is a mage who is a courier of secrets for the King of England. He holds an important key to the war but is betrayed and left for dead on the coast of Cornwall.

Emma Sinclair finds Owen lying on the beach of her ancestral lands. She immediately recognizes that he is a mage and in need of her help. She brings him to safety where it is discovered that Emma can help Owen reach the king.

Emma is a widow who enjoyed a brief time with her husband but has been alone since his death. Owen’s male beauty catches her off guard and she is tempted by him.

There were times when the magic lacked consistency and while the idea of the land holding tremendous power that served as a source for the people was clever (but not all that unique) it wasn’t consistently played out causing me to backtrack and question the timing and use. The magic did not wide naturally through the story but was obviously manipulated to cause both conflict and then success for the characters. C

Queen of all She Surveys by Emma Holly

This is the best of the lot and shows precisely how an anthology based upon myth can be told in a short space with a plausible background. In fact, it’s a pity that Penguin doesn’t allow you to buy these books separately in eform as HarperCollins has done in the past. Holly’s work is a worthwhile read but maybe not worth $14.00 in trade form with three other stories.

Prince Memnon is traded by his father to Queen Tou in order to ransom 20 soldiers. Queen Tou is famous for her harem of men and Prince Memnon is just the latest of her acquisitions. Memnon’s father, King Ravna, the other ruler of the land has traded him. Memnon is willing to do his duty but despises his father and is prepared to despise Queen Tou.

Only upon arrival to the Queen’s territory he sees that the harem is a place of honor and that Queen Tou herself is an unrivaled beauty of great allure. Queen Tou explains that she is god touched after she had been cruelly abused. Since her youth and being blessed by the gods, she has gained long life, strength and a virtually unquenchable sexual appetite. Memnon also has a legendary sexual appetite and believes himself to be a match for Queen Tou.

While the story has only the slightest paranormal underpinnings (Memnon, Tou and Ravna all being god touched), it works within the theme set for the collection. Further, while the sensuality is high, the sex scenes are not overwrought nor do they read forced in anyway. By the end of this seven chapter story, I felt I had a good sense of the political situation, the slight paranormal aspects and the love story. B

In a Wolf’s Embrace by Lora Leigh

This story . . . I’m sorry but this story was just bad. It was poorly written; poorly plotted; poorly devised. The setup is completely unbelievable. Matthias Slaughter is a Wolf Breed assassin who, with the aid of a Breed squad, kills Dr. Benedikt Adolf Albrecht at the Dubbree Hotel. Albrecht was a part of the team of scientist that had developed the Breeds, inhuman creations designed to be the ultimate soldiers.

Slaughter completes his mission but notices that there is a witness –the hotel’s assistant manager, Grace Anderson. Instead of removing the witness as any good assassin would do, Slaughter kidnaps Grace and takes her away. Grace mews a bit about turning Slaughter into the authorities but all her pronouncements are laughable when we read in almost the next paragraph about her panties getting wet just by looking at Slaughter.

The plot has something to do with Matthias being hunted by the directorate of BIG BADs but most of the story are sex scenes between Grace and Matthias. There is even some weird riff in the middle of the story about how “innocent” Grace is which I find particularly odd given all the ways that Matthias finds to penetrate her. Is it better and more romantic when the heroine is innocent? Is the defiler of innocents the type of person that is heroic?

Grace liked to consider herself a well-rounded, experienced woman, but even for her, the way Matthias touched her made her feel almost innocent. She felt unable to deny him, unable to reassert her common sense and run like hell. . . .

His hand smoothed down her arm, lifted her wrist and brought her palm to his stubbled jaw. “Your hands were warm and so soft. As soft as innocence itself.”

“But you are innocent.” He laid his cheek against hers, his lips at her ear, as he pushed her robe over her shoulders.

Worse, though, beyond the set up (woman falls for man she sees kill someone else), the non stop sex, and the playing up of innocence defiled was the poor grammar. The sentences were almost incomprehensible at times and I wondered if I was reading someone’s first draft.

The Breed species hadn’t been lucky enough to be born. No, nature hadn’t, in all her insight and mercy, thrown a genetic kink in the works of an everyday human. Quite the contrary. In one of her rare fits of humor, she had decided instead to work with what man had created.
…
How nature must have chuckled over that one.

Matthias imagined over the years that he had heard a giggle or two from her as well.

Nature didn’t create them, but she decided to involve herself with what man created? And that made her laugh? And why is she giggling over the years?

This sentence I think was meant to say that the technical wizardry of was ensuring that the council was blamed for the death of Albrecht and the deaths of the others before him, but it took me reading the sentence aloud before I actually understood it. I finally gave up trying to understand each sentence (0_0) and just moved on. While the trademark Leigh sex scenes were hot, as usual, it wasn’t enough for me to appreciate this work. D.