REVIEW: Between Ghosts by Garrett Leigh 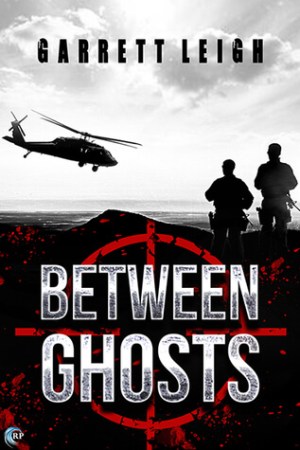 In 2003, journalist Connor Regan marched through London to add his voice to a million others, decrying the imminent invasion of Iraq. Eight months later, his brother, James, was killed in action in Mosul.

Three years on, Connor finds himself bound for Iraq to embed with an elite SAS team. He sets his boots on the ground looking for closure and solace—anything to ease the pain of his brother’s death. Instead he finds Sergeant Nathan Thompson.

Nat Thompson is a veteran commander, hardened by years of combat and haunted by the loss of his best friend. Being lumbered with a civilian is a hassle Nat doesn’t need, and he vows to do nothing more than keep the hapless hack from harm’s way.

But Connor proves far from hapless, and too compelling to ignore for long. He walks straight through the steel wall Nat’s built around his heart, and when their mission puts him in mortal danger, Nat must lay old ghosts to rest and fight to the death for the only man he’s ever truly loved.

I have heard good word of mouth about your books from book buddies whose tastes are usually close to mine, but I also heard that your books are very angsty, so I hesitated. I do not mind heroes being in tough situations and being in pain if the narrative warrants it, but at some point I burned out on what I consider the manipulative angst of quite a few m/m books (let’s pile on every possible pain and misfortune that exists on this Earth and let’s make the characters whine for pages and pages instead of dealing with those misfortunes the way a reasonable person would). And ever since, without a good recommendation, seeing the word “angst” in a blurb scares me. I love military stories, though, and when a friend who loved this one and had it available for loan I decided to dive in.

“On the fifteenth of February 2003, my sister and I joined a million people on the streets of London and put our names to the biggest antiwar protest the world had ever seen. Eight months later, our elder brother, Sergeant James Napper, was shot dead on a British Army base just south of Mosul.”

“The desire to prove myself to a dead man was a welcome distraction from my grief. It took a year of training and planning, but it seemed like no time at all before I found myself on a plane to the most volatile region in the Middle East.”

The desire to gain closure on his brother’s death is not the only reason Connor worked hard to receive this assignment – to write about British Special Forces in Iraq and write about them from experience, so to speak.

“So why are you here? Connor silenced the devil on his shoulder. He’d asked himself the same question, more than once, when he’d first spawned the idea of shadowing British Special Forces in Iraq. His long-suffering editor and mentor at the Guardian seemed to think that Connor was looking for answers—closure on James’s death—but the more Connor thought about it, the less that seemed to fit. In a vortex as big as the war in Iraq had become, Connor was cynical enough to know any answers he went looking for would likely be thin on the ground. Besides, James had died three years ago. With so many lives lost since, who the fuck would care? No. Connor was here to find out why, not how. Why had James died? Why were others still dying? What the hell had been so important—?”

So it seemed to me that while Connor wanted to deal with his grief if he could, he also wanted to see if he could make sense of this war. I liked Connor right off the bat – he treated his assignment very seriously and did as much work as he could in order to be able to fit in at least somewhat.

Of course when he and Nat meet, Nat is still annoyed that he has to babysit a civilian, but soon enough he sees that even though Connor is not in the same physical shape as his guys, he has trained hard to try and be in decent shape. And later, Connor’s extensive knowledge of the language helps them a few times.

From my civilian point of view the harsh realities of the war (the war that to me personally never made sense either – maybe that’s part of the reason I could relate to Connor) were described very believably and the soldiers’ efforts to do their job to the best of their abilities was nothing but admirable to me. I would go as far as to say that to me the war settings felt realistic, but I never served, so I could be wrong.

I also thought that the romance between Nat and Connor developed in a sensible way considering that it was taking place while Nat and his team were on active duty and fighting a war. Connor was not included in the military assignments of the team (he was still a civilian), but he was still there at a dangerous time and a dangerous place, and he was trying to help out as much as he could. When they meet in the beginning, there was a fast attraction, but Connor tried to shrug it off and I believe Nat did as well, but the strength of their attraction was believable to me. I did not think it was an Insta!Love, I think it was just an attraction which later developed in something more.

“Connor killed the thought before it could take hold. Nat Thompson was bloody gorgeous—fair hair, steely blue eyes, scruffy jaw—but Connor wasn’t here to check out the scenery, and he could imagine the consequences if he got caught with a boner in the showers on his first day. James hadn’t given a toss about Connor’s sexuality, but he’d told horror stories of what happened to young gay squaddies, stories that had made Connor’s balls retract like scared rabbits.”

Of course, while they were at war there was not much time (if any) for courtship, but I thought it was lovely to watch how from brief casual hook ups, it kind of sneaked up on both men that they were more than in lust, that they were in love. But once again, there was no time for declarations of anything till the very end. To me this romance arc made sense. I saw what Nat saw in Connor – how hard he worked while being with Nat and his men and trying to help them as much as he could, and how he tried to write the best articles he could even with all the secrecy limitations imposed on him. I understood what Connor saw in Nat as well – how much he cared for his men, how he tried to do his work even when it made no sense or his higher ups would not give them best tools to do it. I liked them together.

As you can see I enjoyed quite a lot in this book. But I did not enjoy couple of plot twists. The first one was just something I struggled to suspend disbelief about – a tremendous coincidence which ends up being a very significant one in order to make the story move where it needs to go. IMPORTANT TWIST THINK BEFORE YOU CLICK

(Nate’s best friend turns out to be Connor’s brother. What are the chances?)
As long as you can suspend disbelief about that, I think you should be fine.

I was more irritated by another plot point which happens several chapters before the end, and which I also want to put under a spoiler cut

(Connor is kidnapped by the insurgents and made to do the video – you know, we kill him if you don’t do stuff. I personally found this to be exploitative – simply knowing that majority of the people who were forced to perform in these videos had their heads cut off. Connor did not, but once again – what are the chances?).