REVIEW: The Backup by Erica Kudisch 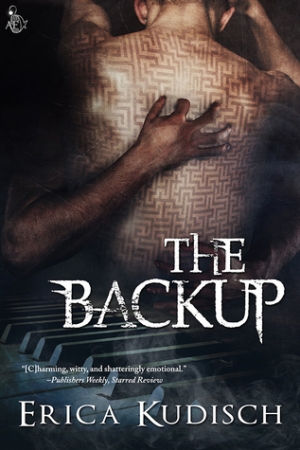 I’m supposed to be better than this. I’m supposed to have a tenure-track job teaching music history to undergrads, writing papers about Bach, and proving to kids like me that you can work your way out of Harlem. I’m not supposed to be following a rock star around the country, fetching his mail, making sure his groupies are of age.

I’m definitely not supposed to be sleeping with said rock star, who claims to be the Greek God Dionysus. At first I thought it was a load of crap. Nik’s fans might think his music captures their hearts—and souls—but I knew better. Until one of Nik’s orgiastic concerts gets out of hand and I don’t know which is worse: that he might be a god after all, or that he has a body count.

Nik doesn’t care what I want or what I should be. He wants to tear down the world I’ve built, warping all I am, until his music is all that’s left of me. I can’t let him do that. I shouldn’t believe in him. I’ve seen what happens to the people who believe in him.

But I can’t get his song out of my head.

The blurb of your story intrigued me – I am a sucker for a good twist on Greek mythology. I love music too – I cannot claim an in-depth education, but I did do some studying in addition to playing an instrument for years, and any time I feel like I can learn things I do not know, I try to seize the possibility.  I also was very clear on the fact that the book WAS NOT ROMANCE before I started reading it so I did not have any expectation about an HEA of any kind. Please take note, romance readers! I cannot stress the words NOT ROMANCE strongly enough, and for once Amazon even shelved the book correctly as horror/dark fantasy. I would not even classify the storyline between Nick and Anthony as a love story. Hate/ lust/ desire? Maybe, I am not sure. It is also apparently classified as literary fiction by the publisher. I am conflicted on whether it qualifies as such, and I am curious to hear opinions from other readers who have read it.

Anthony is a recent PhD graduate in musicology who tried but was not able to get a job in academia. He needs to pay his loans and earn enough to live on, so his uncle (apparently his only family) offers him a job as a handler to singer Nik, whose “brand” is to claim that he is the Greek God Dionysus. To be a handler means to live in his apartment, pay his bills, do all kind of odd jobs, and clean up after his messes, and Anthony does not feel that he has much choice but to agree to do this, at least temporarily.

“Basically, Nik’s a neo-progressive rocker, but he’s got a hook. He’s the Dionysian spirit in music. “All the creation and all of the passion and all of the magic but none of the rules,” that’s his motto! And he keeps the persona up 24/7 from what I know. You can’t even edit rumors into the wiki entry. His watchdogs are practically federal.”

Pretty soon he learns that cleaning Nick’s messes may involve talking to the FBI repeatedly, because occasionally people die at Nick’s concerts – mostly by committing suicide. Very soon he is faced with a choice of whether to walk away or not, because no matter what he believes about Nick’s God status or lack thereof, it is clear to him that in one way or another Nick or his music or both are responsible for the deaths at his concerts. Even if Nick keeps repeating that the people who die made their choices and it is not his responsibility.

I thought the musical background of the book was written with authority. It was clear to me that both the author and the narrator know a lot about music and that music is what Anthony lives and breathes no matter what kind of job he does. It was clear even from the throwaway comments he makes.

I thought Anthony’s struggle with his own insecurities about his worth as a musicologist/ performer  and his push and pull against Nick was extremely well done, even if I did not think he tried to resist Nick’s desires all that much (and I do not necessarily mean sexual desires, but cannot say more without giving away an important spoiler).

“Something in me gives, and the headache’s gone for a couple of blissful seconds. I finally said it. I finally said it, and something in my head is quiet and at peace. “He’s a scam artist with a cult, and if one fewer person in the world buys into him by the end of the day I will consider my job done.”

Let me stress one more time – I understood very well that I was not reading a genre romance novel and I was not expecting to see romantic leads in either of the main characters. What I did not expect was how repulsive I found Anthony to be for the majority of the book, and while I liked his choice at the end, the epilogue was very much open to interpretation. Don’t get me wrong, he did not come off as a caricature of any kind, he felt very real and acted close to how I expect human beings to behave, so to me this means he was a well written character, but some choices that we human beings make do repulse me, so there is that. I interpreted one of the main themes of the book to be “how low one can sink for money” and I guess I am supposed to feel pity for him because he could not find a job in academia, but I am afraid I just could not spare any pity.

I wonder what I can say about Nick without spoilers. I guess I found him a very consistent character considering his background.

The ending was as good as it could get under circumstances, although I was disappointed in the surprise revelation.

Grade: B – very well written, but not a reread ever.