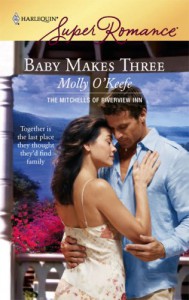 I mentioned on Twitter that I wanted to try out more Harlequin Superromance authors and Larissa Ione suggested your books. I am so glad for the recommendation.

Baby Makes Three is not a book I would have bought through ordinary browsing. Generally I am not a fan of books with babies, featuring babies, mentioning babies, babies on the cover. I think you get the picture. However, it features reunited lovers and I do love a good reunited lover story.

Gabe Mitchell spent fifteen years in the New York restaurant scene and is now throwing all of his savings into creating a destination inn in the Hudson River Valley. The problem is that he doesn’t have a chef. No one seems to want to move into the backwater. Gabe has a wedding to cater or the Riverview Inn will be dead before it even gets a chance to have its first Zagat review.

Gabe’s helpful brother tells him to contact Alice. “Alice had never, ever been the solution to a problem. She was the genesis of trouble, the spring from which any disaster in his life emerged.” Alice is Gabe’s ex wife.

Alice isn’t the superstar that she was when she and Gabe parted. The last miscarriage, the failure of her marriage, and then trusting the wrong people in business led Alice from the chef and owner of a New York City restaurant to the head line chef of a Johnny O franchise in Albany. She’s at a pretty low point, both personally and professionally, when Gabe finds her to offer her a job at his Inn. Alice agrees to cover the impending wedding and the opening of Riverview Inn until Gabe can find a permanent chef.

It’s pretty clear early on that Alice and Gabe didn’t fall out of love with each other, but that they could no longer live with each other. Alice’s desperate need to have a child and Gabe’s preference to walk away than to fight drove them apart. In the glimpses that we get of their marriage, the end days were no picnic. They both said horrible, painful things to one another and their divorce seemed inevitable.

The story is then about how the two of them heal enough to come together again. How Gabe learns that sometimes you have to dig in and fight for what you want and Alice learns that Gabe just needed to know that he was enough to fill her heart.

In this marriage, both Gabe and Alice were at fault. Gabe refused to talk about the multiple miscarriages. It was easier to move forward than dwell on the pain. Gabe has moving forward down to perfection. Alice wanted babies, it seemed, more than anything else. She wouldn’t even consider adoption. She also needed someone to grieve with her for the loss of their babies.

Forced together for two months, Gabe and Alice can’t ignore their feelings for each other but while Alice is ready to change and open her heart to Gabe, Gabe doesn’t want to see that Alice has changed. He just wants to move forward. He tries to date a local farmer. He tries to bed Alice and get her out of his system. He tries to ignore and bottle up all the emotion that Alice, his loss, their loss brings.

Everything about the setup is beautiful. It’s like the dream we had a million years ago. Better even than that. Kisses at dusk, troubled kids working out their prolbems in the kitchen, weddings being planned — there was nothing he could ask for that would be better. Except…if his chef wasn’t Alice. If his blood didn’t hum for his ex-wife. If it was another woman with whom these two months could actually build into something more.”

Gabe really wanted a family too. The attraction of the local farmer is not just that she’s good looking and interested in the same things as he is, but that she has an adorable daughter. A daughter that could have been Gabe’s.

If I had quibbles with this story it was how easily I think Alice’s alcoholism was glossed over. I thought it would play a larger part of Alice’s character arc, but it didn’t seem to have the impact I was expecting. I thought Gabe and Alice were very authentically drawn.

Strong B for me.