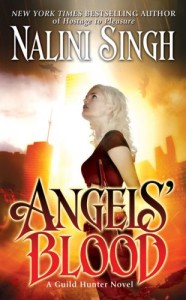 Although I have not read your series novels, I have enjoyed all the paranormals in your Psy/Changeling series to varying degrees. Moreover, I have a real soft spot for angels, dragons and other winged creatures. So when I heard about your new Guild Hunter series, which has a world with angels, vampires and vampire hunters, I was very excited to read the first book, Angels’ Blood.

Twenty-eight year old Elena Deveraux is a vampire hunter. Gifted with acute senses, and, in another sense of the word, with weapons, Elena belongs to the Guild, an organization through which she is contracted to hunt wayward vampires and return them to their masters. The vampires’ masters are the angels — winged beings with special powers whose most powerful leaders, the archangels known as the Cadre of Ten, rule the earth.

The angels in this book are not necessarily saintly or even good; some of them, are, in fact, downright corrupt. It is the angels who can turn humans into vampires, but they only do so in exchange for a century of indentured servitude on the vampires’ part. Most vampires are the angels’ minions, but some vampires chafe at the angels’ authority and go rogue, and that is when the Guild’s hunters are called on to capture them.

After returning from one such mission, Elena hears from her closest friend and Guild Director, Sara, that she has been contracted to do a job for the archangel of New York, Raphael. It was not a contract that Sara could refuse, as to risk an archangel’s wrath is to risk death. Elena feels trepidation at the thought of even meeting with Raphael, much less doing a job for him, but she doesn’t feel she has much choice, and she would rather die than show her fear.

On seeing the archangel, Elena is struck silent by his unearthly beauty and the power that is “stamped on every inch of his skin.” But Raphael’s terrifying beauty and power aren’t the only shocks to Elena’s system. She is even more stunned when she learns from Raphael that instead of tasking her with retrieving a rogue vampire, he expects her to track another archangel — a being as powerful and deadly as himself.

The reasons why Raphael and the other members of the Cadre of Ten want one of their colleagues captured are shrouded in mystery, and Raphael is not above threatening Elena or using his mental powers to try and control her. When she protests this, he displays an ability to get her to cut herself. To Raphael, who has lived for over a millennium and who feels responsible for millions of lives, one woman’s life is a puny thing.

Elena fully expects that if she fails at the task he has set for her, Raphael will kill her. If she succeeds, she may come to know too many of the Cadre’s secrets. Refusing the job means signing her death warrant as well as her friends’ and her family members’, but taking the mission on is only marginally less dangerous.

Raphael is a terrifying being, unused to being disobeyed, while Elena is fiercely independent and unwilling to kowtow to anyone. But despite this, a powerful attraction coalesces between them, one that unsettles Elena and intrigues Raphael — one that will change them both.

Angels’ Blood is part urban fantasy, part romance, and part detective story, as well as an exhilarating, addictive read from start to finish.

The premise of fallible, flawed archangels who rule and oversee different geographic territories was reminiscent of one of my favorite books, Sharon Shinn’s Archangel. But the world of Angels’ Blood was also more familiar than the one in Shinn’s book.

The world-building raised some questions in my mind, since I wasn’t sure at what point in an obviously alternate earth’s history the story took place. The level of technology seemed similar to ours, with cars and cell phones still in use, as well as similar fashions, but this is also true of the Psy/Chaneling series, which if I’m not mistaken, takes place in the future of an alternate earth.

The world of Angels’ Blood shared some of our own vampire myths — the notions of vampires being vulnerable to garlic and sunlight — even though these myths were wildly inaccurate and in truth the vampires in Angels’ Blood were mostly immune to these things. It seemed to me that vampires are widespread enough in this world that most people would know better than to believe false myths.

I was willing to suspend disbelief though, because of the beautiful images created by the unexpected contrasts in the world you conjured. An angel with blue wings… Celebrities being seduced by vampires at a party as an angel watches… An angel using a cell phone… and I could go on. There was a seductive pull to this world and its not-so-angelic angels.

The mystery surrounding the archangel Elena was expected to hunt was suspenseful. There were also many interesting side characters, from Elena’s hunter friends Ransom and Sara, to the angels and vampires who were loyal to Raphael. I was particularly intrigued by Illium, an angel who was fascinated with mortals, and by Elena’s father, who had disowned her for being a hunter but showed signs of caring for her nonetheless.

Elena herself was an appealing heroine, bright, loyal and above all, courageous. Sometimes almost too courageous. I liked the way she stood up to Raphael even at his most terrifying because she “wouldn’t crawl, not for anyone.” But therefore, when she wisely chose not to antagonize the villain toward the end of the book, it seemed a bit out of character.

There were times I felt that someone as smart-mouthed as Elena should have run into even bigger trouble than she did, and I also didn’t love being told that she was feminine over and over. I never doubted Elena’s femininity because I don’t feel strength and courage are the exclusive territory of men. But despite these hiccups, I liked Elena and enjoyed reading about her.

The character that made the book, though, was Raphael.

I loved the fact that unlike many romances with immortal beings, Angels’ Blood did not shy away from the natural consequences of extreme age and power. Raphael was not merely jaded by his age and isolated by his power; he had grown distant from human concerns, even as he tried to rule wisely. His compassion extended to human beings as a whole, but not to any one individual, since in order to put thousands or even millions of lives above any one life, he had to exert his authority to a sometimes terrifying degree.

All of these made Raphael an exciting character to read about (his good looks and sex appeal didn’t hurt, either), and I thought it was a fascinating paradox that Raphael’s very need to rule responsibly was one of the things that threatened to make him tyrannical and capable of dark deeds.

It was thrilling to see Raphael’s feelings for Elena humanize him, though I would have liked to understand better what it was about Elena specifically that gave her the ability to engage Raphael’s emotions more deeply than any of his other lovers (all warrior women) had done in his millennium of existence.

Raphael’s transformation was so absorbing that I wanted more of it, and I felt that it was a little rushed, in that he changed a bit too much a bit too quickly. Despite this, the moment in which his realization about himself came was terrific, and the ending of the book, though not unexpected, was still so wonderful that I have read it a few times now.

I look forward to more of Raphael and Elena’s story. There are things in their past and present that they have not shared with each other yet, and the mystery surrounding Elena’s parents has also captured my interest. Not to mention that this book that the ending for this book made me feel that there is a lot more excitement in Elena’s future. In the meantime, while I eagerly await the sequel, I recommend Angels’ Blood to fans of paranormal romances. I feel certain that this series will hit it big. B+.