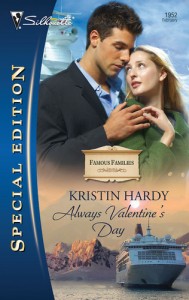 I generally don’t read many books from the Silhouette Special Edition line. I can’t say exactly why. I enjoy the Jessica Bird category books and those are SSE. I think I equate the blue and gold covers with babies and the red covers with career women? Whatever the reason, I consciously went there this month to be more Jayne-like. She’s trying everything under the digital Harlequin sun and I want to try to be more adventurous.

Larkin Hayes is a bit of a jetsetter who has come on an Alaskan cruise at the request of her father, Carter Hayes, in order to repair a five year rift between the two. Larkin welcomes this opportunity for the strain has caused her much personal pain. When Larkin’s mother and Carter’s wife died when Larkin was 12, Carter sought to recreate the magic he had with his lost wife by remarrying. In the last 15 years, Carter has remarried 4 times and each time has brought further separation from his daughter. His last marriage resulted in a huge fight that ended with Carter and Larkin not speaking to each other. Larkin accused Carter of marrying a dilettante and Carter accused Larkin of being a dilettante. It is true that she’s done really nothing with her life but live off her trust fund. Yet, Larkin never comes off as the tiresome heiress, partly because her aimlessness is a core part of her character arc.

Set against this backdrop Larkin meets Christopher Trask on the Alaskan cruise. On the surface, Christopher’s life seems to be the complete opposite of Larkin and Carter. He’s on a cruise with his extended family: aunts, cousins, nieces and nephews. They are happy, fulfilled, and close knit. Larkin views the Trask family with some skepticism, fear and envy. Carter is drawn to it. During the cruise, Larkin and Carter become involved in the lives of Christopher Trask, his aunt Molly, and everyone else.

Larkin, whose heart is damaged from Carter’s multiple marriages, is at once attracted to Christopher and scared of him. She searches for reasons not to allow herself to fall for Carter and the warm and sexy image he projects.   He was once in finance and that gives her an excuse to view him as just another gold digger, after her father’s billions. He now farms (a goat farmer, to be exact) and that gives Larkin the excuse that he doesn’t have a lifestyle that fits hers. Carter is a very sexy goat farmer as Larkin describes him:

It didn’t matter, suddenly, that she’d always gone for stylish, sophisticated men. It didn’t matter that the country look wasn’t her thing. All she could do was stare as Christopher crossed the yard carrying some sort of big metal canister, muscles shifting in his arms as he walked. He looked strong, capable, immensely confident.
And outrageously sexy.

For Christopher’s part, he can’t keep his eyes off Larkin, regardless of her aimless life and her father’s billions. He likes her because of her spirit, her willingness to try new things, and well, because she thinks she knows it all but doesn’t really. But once the cruise is over, Larkin and Christopher aren’t at a place where they can go on together and so they split up only to find themselves reuniting at Christopher’s farm when Larkin speeds to Vermont to prevent her father from entering into yet another marriage.

Such a stupid little argument. Then again, why was she surprised? That was what relationships were made of. That had always been the way with Carter and his wives, one stupid argument after another, salted with lies, until the arguments became pitched battles and the battles eventually became the end. The moral of her story was that relationships just weren’t worth it.

Not that she would dignify a few days of flirtation on a cruise with the term relationship. No matter how good the kisses had been.

But the worst part, the part that completely fried her, was that she missed him. For all that she was still annoyed at him, she just missed having him to talk to, to laugh with. She missed that feeling of connection. And she hated the fact that she would always wonder how it would have been with him, what would’ve happened.

What had happened was nothing, end of story. Christopher Trask didn’t signify. He was just another face in a photograph to stick in a drawer somewhere, another memory to bring out on a long, sleepless night.
Too bad she was having so much trouble sleeping these days.

There, Christopher challenges Larkin’s ability to stick to anything because Larkin is fatalistic. Relationships always end bad. Be happy with what you have. But Larkin’s had enough of doing nothing, being nothing and she bets him that she can farm with the best of them. This was my favorite part of the book. We get to see the really grueling work of a farmer and the rewards. We are shown how much Christopher loves farming, his charming habit of naming all of his goats, Larkin’s internal fortitude; and there’s an absolutely lovely metaphor between the goats and Christopher and the trust that they place in him.

The one thing that really bothered me was that the Alaskan cruise part of the book was filled with too many of Christopher’s family members. It was hard to keep them apart and it seemed that they were inserted to appease past readers of the series. See here, the characters were saying, we are still married, blissfully happy, and procreating. I think that’s why I liked the farm section of the book so much. It was focused more on Larkin and Christopher with contrast supplied by the burgeoning relationship of Carter and Molly.

This book managed to be romantic without being sappy and that was some struggle given the title of Always Valetine’s Day. I really enjoyed seeing Larkin come to terms with her father’s weakness in relationships and her father come to terms with the harm that his careless search for happiness did to his daughter. I loved that Christopher and Carter challenged Larkin to be brave and that Larkin ultimately took up that challenge. I guess I’ll be searching the eharlequin site for more Kristin Hardy books.

PS: I see that Jayne liked you as well. Win!