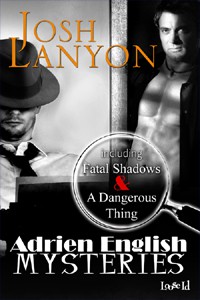 I don’t ordinarily look for gay fiction but in at the urging of Teddy Pig I picked up the Adrien English Mysteries which is a two novella* collection featuring the titular character, Adrien English, a gay bookstore owner and mystery writer with a bad heart, whose situation forces him into sleuthing.

These stories are told in the first person and English is a great narrator. He’s self deprecating with a dry sense of humor, a good sense of self, and a general appreciation for his particular lot in life. Like many titular characters, his personal relationships have been unsuccessful.

The first novella is Fatal Shadows which introduces Adrien to the reading audience. An employee and old acquaintance of his is murdered and Adrien looks to be the prime suspect. The Los Angeles detectives, Chan and Riordan, seem to be closing in on Adrien. To prevent going to prison, Adrien is forced to do some investigating of his own and in doing so, puts his own life in danger.

The best part of this book is Adrien’s narration. He’s observations are concise, yet descriptive.

The Finches are writing partners, which seems like a surefire way to destroy a healthy marriage, but what do I know? My social life was pronounced DOA many moons ago. She’s small and slim and dark, and so is he; a matched pair, like bookends. They met at one of the Bouchercon mystery conferences. Love among the midlist.

I murmured noncommittally and picked up the gold-edged pink tea cup. The handle was too small to actually get my fingers through. I always felt like I was playing house at these brunches. All that was missing was a giant imaginary friend. I could have used a friend here.

I tried to think of someone who might send me flowers. Anyone. I couldn’t think of a single person I was on flowery terms with — let alone flowers with cryptic notes.

The mysteries themselves, both in Fatal Shadows and A Dangerous Thing, the second novella, are interesting but not innovative. What makes this book, or collection of stories sparkle, is Adrien himself. Because the first person presents only one point of view it takes a particularly insightful narrator to expose the reader to the full complement of the narrator’s surroundings and provide insight as to the thoughts and behaviors of other characters. This works well because it not only shows the reader a more fulsome view of things, but it also shows the reader that the Adrien is truly sharp enough to be a good detective.

The added benefit is the emotionally moving relationship that develops between Adrien and detective Riordan. Riordan isn’t just a closeted gay. He is someone who hasn’t been able to come to grips with his own sexuality. He still sleeps with women and wants to live what he deems a normal life. His attraction to Adrien is one of great reluctance. Adrien’s also has little desire to embrace the feelings, both emotional and sexual he begins to feel toward Riordan:

Riordan was not remotely my type. Even without the whips and canes and butt plugs. I don’t understand the wish — let alone the need — to be dominated, controlled. Not presuming to judge, just not something I wanted for myself.

And yet there was something about his strength, his arrogance, his sheer size that got under my skin. He probably didn’t couldn’t even spell vanilla. He was probably selfish in the sack. Probably selfish and greedy and … unsophisticated. And hung like a horse.

Interestingly when I told one of my gay friends about the book and urged him to read it, he claimed that he had no interest in reading about any closeted characters. He was done with them and waved his hands in a cutting gesture. I thought that the conflict was a great one but, of course, I don’t have to deal with the trauma that those types of relationships create.

Adrien and Riordan are familiar characters within the romance trope only I found Adrien to be a bit smarter and more emotionally adjusted than the average heroine. Adrien does veer toward TSTL territory toward the end of Fatal Shadows in an effort to heighten Adrien’s personal jeopardy. Riordan was a standard alpha male whose issue was his own sexuality rather than that of commitment. There are only a few sex scenes in the stories but the full encounter between Riordan and Adrien toward the end of Fatal Shadows is quite beautiful. The relationship is more fully fleshed out in A Dangerous Thing. As a whole, I would give the collection a B+.

You can purchase the trade paperbacks of Fatal Shadows and A Dangerous Thing from Amazon or both stories in ebook format from Loose Id at a much reduced cost.

*These are longer than a traditional novella but not as long as a regular mass market. The two books come in under 50,000 words per story so I wasn’t quite sure what to categorize them as.

→ Jane
Previous article: REVIEW: Road to Love by Linda Ford (5/08)
Next Post: Will Davis at the Guardian Blogs that Vampires Are Forever