REVIEW: Adios to My Old Life by Caridad Ferrer 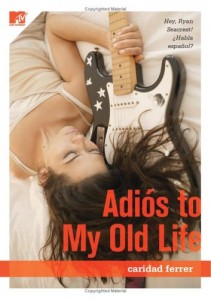 This year, Jane, Janine and I are participating in the 2009 TBR Challenge.   I know your novel doesn’t fit into March’s theme but given my past history with this challenge, that should come as no surprise.   It was in my TBR pile, however.   And since I was in the mood for a YA, your book did the trick.

Ali Montero is a good, Cuban-American girl.   She goes to Catholic school and shares a love of music with her father, who’s a music professor.   He wants and expects her to become a music teacher just like him.   That’s all well and good, but Ali doesn’t want to teach music.   Oh sure, she can but that’s not what fills her soul.   What she’d much rather do is perform.

To that end, Ali auditions for a TV competition, Oye Me Canto — a Latin American version of American Idol.   At 17, she’s one of the youngest but age means nothing to talent.   Much to her shock and delight, she’s selected to be a finalist.   Great thing, right?   It would be if it weren’t for the fact that Ali entered the competition without her father’s permission.   After all, he wants her to become a teacher and he just wouldn’t approve, let alone let her.   But getting her father to let her on the show is just the first of Ali’s challenges.   Now she’ll have to figure out if the price of reaching her dreams is worth it.

While I don’t watch the show anymore, I was a huge fan of American Idol when it first premiered.   That might sound strange because I never voted.   Not once did I try.   In fact, I rarely watched the results show.   But I love music and I love watching people perform — it’s very true.   You can tell when a performer is on and when they choose the correct song and style.   So it was interesting for me to read a YA take on this.

Ali’s voice was great.   I loved the Latin American culture that pervaded through the whole book.   It informed her character and personality in a way that made her a fleshed out character.   Of course, this was helped by the fact that the cast was mostly Latin American — maybe even entirely; I’m trying to think of a non-Latino character and am failing — so the characters ran the gamut, making a great and diverse cast.

On the other hand, there’s nothing exactly new here in the story.   I think the well-done Latin American culture brings a fresh spin to it, but the other elements will be familiar.   There’s a cute boy that Ali likes.   There’s a rival who’s out to sabotage Ali’s chances of winning.   There’s Ali’s transformation from being a normal girl to being a future star.   This didn’t bother me because I thought it was well executed, but I think readers looking for a new and innovative read will probably not be as satisfied.

Because of the reality TV show premise, I also think the novel can be a little episodic.   Don’t get me wrong.   Every part fits into the story following Ali’s quest to become the next Latin American superstar, but sometimes I thought we’d flit from one thing to another without leaving much lasting impact.

I did like the subplot involving Ali’s father and his love life.   I thought Ali’s perspective on the whole matter was very refreshing.   Except for the notable (and understandable) exception, she takes it all in stride and makes no secret of who she thinks he should be dating anyway.   There’s no anger over him finding a new love.   There’s no competition for attention.   In fact, I liked the fact that Ali thought he should have found someone new a long time ago.   She loved her mother, but Ali didn’t put her on a pedestal and doesn’t consider a new partner to be a "replacement."   I liked that and after reading many a young adult novel in which the narrator is antagonistic towards the parent’s new significant other/romantic prospect, it was nice.

All in all, I thought this novel was a pleasant, comforting read.   The cultural aspect put a wonderful spin on a familiar story.   At the same time, there were also enough twists and surprises to keep me entertained.   I don’t like my stories too familiar, after all.   All things considered, this comes out to a B- for me.

→ Jia
Previous article: WINNERS of the ACE/ROC Giveaway
Next Post: Amazon and Two Sides of the Intellectual Property Coin