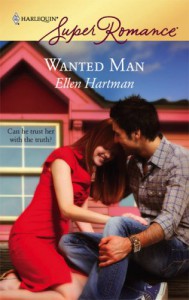 I think this is your first book. I was thrilled when I found it on Mill & Boon in digital form because I could immediately buy it (along with all your other titles) after the thoroughly enjoyable Boyfriend: Plan B (review to come).

Nathan Delaney is a famous children’s writer using the pen name of Chris Senso. Nathan is a recluse, though, because he had a brush with fame back in his early college days which turned him into a near hermit. The only picture on his books is a childhood picture and he lives a very isolated life.

Unfortunately a popular daytime talk show host has decided that she will unmask Chris Senso and she begins a daily hunt for him, asking for her viewers to call in with tips and clues. She ratchets it up on a daily basis from using an age regression analysis to hiring a profiler to look at the books to determine the race, age, geographic location.

Nathan is spooked. He had writer’s block since he and his fiancee broke up. Nathan decides to get out of his current town. He starts driving and his car dies around Richwoods,New York.

Rhian MacGregor’s life was put on hold when her sister and her sister’s husband died eight years ago. They left behind a little baby and Rhian took up the parenting reins. She lost her fiance and her business that she started with him but now, as Jem is off for a summer trip with his grandparents, Rhian is starting to look at her empty life.

First, though, she needs to get her house painted. Nathan has offered up his services as a housepainter and despite having no local recommendations and appearing kind of a drifter, Rhian doesn’t have much choice. No one else will return her calls. (why Nathan choose to set himself as a housepainter is a bit questionable).

Nathan and Rhian are instantly interested in each other, but both are little too risk adverse to take a chance. As Nathan paints Rhian’s house and they begin to spend time together and their attraction deepens. Rhian decides that Nathan, a transient painter, would be the perfect person with whom to have an affair while Jem is gone. Nathan knowing he is just passing through also feels that this connection with Rhian is safe.

I loved the interaction between Rhian and her friend Min, both women were at a crossroads in their life. Nathan’s banter with his long time friend and agent, Matt, provided frequent moments of levity. Rhian and Nathan’s connection felt genuine.

Raising one eyebrow, he grinned wickedly as his eyes skimmed down her body. "Will you wear an apron? A very little apron to go with this," he said, leering, "very little skirt?"

"I’m a waitress, not a French maid." She blushed. She’d wanted him wanting her, but it felt uncomfortable.

He kissed her firmly and then pulled back and said matter-of-factly. "Any apron will do. I have a good imagination."

I thought it was an interesting look at the fetishization we have as a public and our deep seeded desire to know all can result in exploiting other’s losses such as when Lindsey, the talk show host, dug up the story about Jem’s parent’s death and put the pictures of it on her show. Jem was heartbroken and confused but all the while had enjoyed the hunt for Chris Senso.

“Why did she show my mom and dad?" He turned to Rhian with bewildered eyes and she pulled him closer. "Does she know about them?"

Nathan knew the questions Jem meant, because he hated them, too.”

Nathan’s emotions were all over the place. He was falling in love with Rhian who maybe only wanted a temporary fling. He was afraid of ruining the tranquility he felt in this small town with its loving community by being found out as Chris Senso. He felt guilty that his friend and agent, Matt, was being followed around 24/7. He felt like he was losing control (and he was).

Rhian’s not so confused. She knows what she wants but she’s afraid to move outside her comfort zone, whether it is working on her children’s book or taking what she wants with Nathan.

But both Rhian and Nathan’s lives were on hold. Nathan because he hadn’t quite been able to shake off the past and Rhian because of Jem. Both were afraid to move forward.

The hunt for Chris Senso was a great way to build anticipation and suspense in the story. You knew Nathan was going to be found out. It was a matter of when and how.

There are things that didn’t make sense to me. Why did Nick really believe Patricia, his former fiancee, would not reveal his secret when they broke up? Where did he meet her if he has lived this hermit life existence? I also thought it was interesting that Nathan’s writing and art was so inspired by the women in his life. And if that were so and Patricia was as truly shallow as she is portrayed, then why wouldn’t his books during the Patricia period be shallow as well. As an aside, I always wonder at the taste of the hero when his first wife/fiancee is such a horrible person. Surely, there had to be something to recommend her other than her good looks and her desire to be showered with gifts? Also, was it too perfect that Rhian wanted to be a children’s writer as well?

I did love how the book ended and how Nathan and Rhian foiled the talk show host and Patricia. This is a sweet and tender romance and I’m ever so grateful to Jayne for having shown me the way to your books. B-

This book can be purchased at Amazon in used format (originally published in 2007 and apparently no longer in print) or in ebook format Mills & Boon.

PS Mills & Boon, the excerpt at the end of the book for Falling for the Tycoon by Karina Bliss totally worked for me. Bought the book. Who can resist a man that cries at funerals!