REVIEW: A Night of Long Knives by Rebecca Cantrell 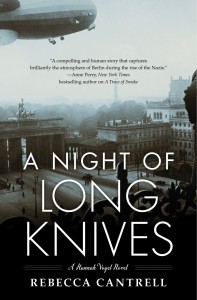 Last year I reviewed your debut novel, “A Trace of Smoke” and commented that I was looking forward to any sequels you might write. It looks like you’ve got plans for quite a few up your sleeve and the first one up is “A Night of Long Knives.” Those more familiar with the history of pre-WWII Germany will instantly know the event which kicks off the book but me, I’m learning as I go.

It’s three years after the events of “A Trace of Smoke” when Hannah Vogel managed to escape from the rising tide of National Socialism in Germany. She’s been careful never to set foot on German soil since then though she’s gone to England a few times to meet with her lover Boris. She’s built a life for herself and young Anton in South America by working as a travel writer with a forged Swiss identity and though she knows she’s taking a risk, she travels there via zeppelin with Anton in order to write an article. As they watch the ground float beneath them, Hannah realizes that they’re going to land in Germany. During the course of the journey someone has betrayed them to the powerful man who wants to use Anton for his own ends.

Unable to escape from the men who’ve been sent to kidnap them, Hannah and Anton are separated on the eve of the bloodbath used by the Nazis to eliminate those they consider to be traitors and enemies. Hannah escapes one danger only to have to hurl herself back into the growing nightmare that is engulfing her beloved Germany. But to get back her son, save those she cares for and bear witness to what is happening, Hannah will do just about anything.

The action here is nonstop, intense and riveting. Hannah’s up against odds I thought would crush her but then those standing against her didn’t bother to calculate the determination of a mother to get back her child. Or a reporter determined that the truth will be known. Hannah is horrified at the changes which have taken hold in Berlin in only three years and through her eyes you show us a country headed down the path which will result in world war.

Hannah’s already survived, yet lost so much, in the Great War and now fights to show the world what is going on in Germany before it’s too late. In earlier years, she had to develop contacts and survival mechanisms as a woman trying to support herself though the postwar inflation and beginning of the worldwide depression. Now she has to use those skills and learn new ones as she tries to outsmart a cunning adversary, solve a murder and stay one step ahead of the SS. The scene where Hannah learns from her old friend Bettina how the everyday people of Berlin are beginning to fear everyone is heartbreaking. The encounters Hannah has with the Berlin underworld figures are chilling. The scenes of Hannah in the headquarters of the SS are terrifying.

I was impressed by Hannah’s “never give up” determination to find Anton. By her ruthless “take no prisoners” mentality as she scoured the city and used every contact and scrap of information she ever knew. I also enjoyed learning more about the city and about Germany in the prewar years. The information is presented in such a way that I never felt it was a history lesson and that I needed to be taking notes for the final exam. Instead it flows along with the story and seems natural.

The evolution of Hannah and Boris’s relationship is a treat. It’s obviously moved forward from the point we last saw at the end of the first book but has some surprises as well. And not all of them are pleasant ones which makes it more realistic. I was sorry that Trudi plays no role in this book beyond breaking Boris’s heart, as children will do, but perhaps she’ll show up in the future. As well, I would have liked to see more of Anton but given the first person POV and the fact that Hannah’s trying to find him, well that wasn’t going to happen.

There’s one character who surprised me as the plot unfolded. He seemed so set in his path that he never stopped being a menacing figure for me through the end. Did you base him on any historical figure. And did the information he supplied actually make it out of Germany in a similar way? Had I been Sefton, I’d have been all over Hannah to learn her sources. I will also be honest and say that the villain ended up chewing the scenery and being too cartoonly eeeevil for my tastes.

“A Night of Long Knives” does what I love historical fiction to accomplish. It makes me interested in learning more about the times presented and as a sequel it shows characters from previous books moving forward as individuals and evolving in their relationships with each other. I appreciate the information about how you jiggled some historical facts and made certain characters do things to get the plot where you needed it to go. The difficulties in inserting your fictional characters so closely into actual historical events must present problems I couldn’t begin to imagine. Brava on a job well done and I’m looking forward to more adventures with Hannah and Co.

This is a hardcover from Tor/Forge, a division of Macmillan. Macmillan engages in Agency pricing.