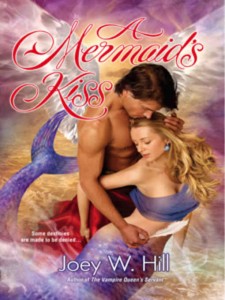 This is one of those books in which there were moments where I thought to myself, if anyone but Joey Hill were writing this, it would be flung against the wall. However, the deliciously subversive retelling of the Little Mermaid made famous by Disney was quite fun and I ended up appreciating the chances that you took in the telling of the story.

This is a fairy tale with erotic overtones and thus there are unusual sexual situations which might not sit right with every reader, but because of the power of the narration, I allowed myself to be immersed in the author’s environment.   It is a fairy tale about fantastic creatures and to force the characters into human form to make the sexual scenes more palatable would be to do a disservice to the spirit of the story.   If the sexual scenes are there truly to advance the plot, then changing the characters into human form would be an unnatural construct.   While I read some of the scenes with a vague sense of discomfort, I recognzied that there was beauty in which the scenes were told as well.   In essence, they were a celebration of Anna’s form and almost necessary in this retelling of the Mermaid lore which begins with Anna’s foremother trading her fins for legs with disastrous consequences.   There was a rejection of the idea that physical perfect rests solely in the human form.

Anna is a mermaid with a tragic destiny. As the one of the daughters of Arianne, Anna is cursed with a mission and a short life span to carry it out. Every daughter of Arianne dies before the age of twenty-one, part of the curse of the daughters of Ariannce.   The following is a fairly long excerpt but I put it in spoiler mode for those who don’t want to read anything in advance:


When Jonah nodded, indicating his familiarity with that part, Anna was glad she didn’t have to go back over the details. "Arianne failed and was turned to stone, as the legend and the reality go. But Neptune made a deal with the seawitch. He wouldn’t kill her painfully, and she would turn Arianne back into a mermaid." Anna’s lips twisted. "But something went wrong and the seawitch couldn’t lift the shape-shifting spell. Nor could Arianne control it. Throughout her life, she’d still shift unexpectedly from mermaid to human, and so had to live close to the land, else she would have drowned. Each time she shifted to human legs, she also experienced excruciating pain, as if stepping on razor blades when she walked. Even so, she danced on the beaches at night, remembering her prince. She left her daughter a letter which said the way he’d looked at her when she danced made the pain worth it to her."

"So who was the father of her child?"

Anna shook her head, curled her lip. "The prince, for all that he gave his love to another, had no problem lying with Arianne before he decided to leave her for his human bride. Arianne was carrying his child when she turned to stone. No one expected the child to live, but she did. It’s been the pattern ever since. No daughter of Arianne has ever found the happiness of enduring love, but she always finds herself with child at some point. But each child, while inheriting the ability to become human, also had different unique-abilities.

"Because the abilities were involuntary and caused harm to themselves or those they loved. The first daughter, if she got excited in any way-‘too happy, too sad-‘she would disrupt the waters around her violently. Tidal waves, tsunamis, waterspouts. That was why Neptune built the cottage for her. As long as she wasn’t in a large body of water, that wouldn’t happen. But before that, she wrecked ships, created storms that took lives. She rescued one man from her devastation, and was able to love him long enough to get with child before he discovered her nature and couldn’t accept it.

"Her daughter couldn’t speak except in song. The sound of her singing voice would put whoever heard it into a deep sleep from which they wouldn’t wake for days. Sometimes months. So she remained mute most of her life, desperately wishing to communicate, but only able to do so a moment or two before those to whom she wanted to talk so desperately were lost in slumber." Anna tried a smile, failed. "And so it goes.

"Neptune suspected it was a cruel irony orchestrated by the seawitch, because the deal between them included a blood oath that neither she nor her descendants would ever directly cause harm to Arianne or those descended from her again. But Mina told me the stone spell was never meant to be reversed and the magic simply took on an unpredictable life of its own."

In this fairy tale world, Angels exist to battle the Dark Ones, creatures who literally subsume their prey.   Jonah was one of the battle commanders of the Angels and he had fought so many battles, lost ones so close to his heart, that he allows himself to be wounded in battle as a result of his disillusionment and falls to earth.   Anna finds him and refuses to let him die.   She is beset with awe over the Angelic creatures and to allow one to pass on without aid would be an anathema to her.

Anna and Jonah suffer from the same issues but manifest their problems differently.   Anna believes that she has nothing to offer this world and sees in Jonah the attempt to make her short life worth something.  Jonah, is deluded, beaten down by his immortality, his lack of connection. He’s not sure of his mission in life and loses faith.   Jonah sees in Anna a purity of spirit that should be allowed to continue in this dark world.   Both characters see themselves as doomed. Anna because of her familial curse and Jonah because of his position. Both want the other to live and prosper by making O Henry-ish sacrifices.

There are some irritants. Jonah refers to Anna constantly in diminutive terms. She has small hands. He calls her “little one” or “sweet little one.”

Her features were so fine, small. He put his finger up beside the line of her nose, just to judge, and it seemed the tip of his finger would almost cap it. Her lips were a tiny bow, and despite himself, he imagined what it would be like to stretch them-

I also found that the plot meandered a bit. It’s a road romance, as Jonah and Anna go in search of something to heal Jonah’s wounds, and as we readers journey with Jonah and Anna, the pace, timing and convenient events make the journey a bit bumpy.   B

→ Jane
Previous article: Newsweek’s 7 Article Epic Will Be a Book
Next Post: Winners of the Demon Bound Contest