REVIEW: A Lady of Persuasion by Tessa Dare 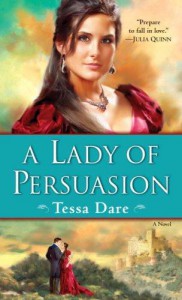 A Lady of Persuasion brings home all the characters in the previous two books in the trilogy as the previous protagonists play a part in the romance of Sir Tobias Aldrige and Bel Grayson.   Sir Tobias was jilted at the end of book one, Goddess of the Hunt by Sophia, the heroine of Surrender of a Siren.     In an effort to save some face for himself and to allow Sophia to reenter society should she come back from her lark unmarried, Toby played the part of a rake.   He might have been jilted, but it was because he was not ready to settle down.   The truth is that Toby is very angry at being jilted and it causes him to have self esteem issues.   He can get young ladies to fall for him, but they fall out of love with him, seemingly just as easy.

When he spots Bel Grayson at a party, he finds that she can be the perfect instrument of revenge against Benedict Grayson, Bel’s older brother.   Bel doesn’t want to marry a mere sir.   She has plans to effectuate reform in London and must have a powerful, titled lord to aid her causes.   Toby convinces Bel that his  notoriety  will work just the same way and extracts a promise of marriage from her.

Gray becomes enraged as does Bel’s and Gray’s half brother, Josiah, the product of their father’s liason with an African slave.   The two are ready to string him up, while Sophia, beset with guilt urges everyone to stay calm and wait and see.

I had a hard time liking anyone of the characters in this story.   Bel I didn’t like because I found her to be priggish, inconsistently so.   She was said to have a social reformer zeal and she certainly refused to eat any ices made with sugar not from her own slave free plantation, but she didn’t seem to worry about any other of the social injustices that took place. I.e., she never questioned where her textiles came from, the treatment of servants, and many other social issues.

She adopted the chimney boy as one of her causes but it seemed more like she needed a cause and took up the first good one she could find.   She urges Toby to run for Parliament and plans to use him to make changes that she wants to see enacted.   What those changes were seemed to be less important than Toby’s placement in society.   In sum, I found her social piety unconvincing.

I didn’t like Gray at all because he acted like an ass toward Sir Toby. Given that it was his wife that jilted Sir Toby and not the other way around, I wasn’t sure what Gray’s problem was other than he liked to play surly older brother.   Sir Toby’s willingness to play a role to ensure that Sophia could come to London and not be disgraced affected Bel’s prospects. Without Sir Toby’s actions, it would be easy to see Bel and her family be persona non grata within society, particularly with the half-brother African living in their home and being in charge of the Grayson shipping interests.   Maybe he should have been more repentant, or at least, accommodating.

Sophia was probably the worst for me.   It never really sunk home in Surrender of a Siren how truly awful her actions were. I was too caught up in Sophia’s need to be “free and live life” mantra.   It was hard to face up to what a selfish wretch Sophia was.   She thought nothing of anyone but her own needs and even in A Lady of Persuasion I felt her vaguely unrepentant.   She paid not one cent on the crime she committed.

Interestingly, however, this made Sir Toby out to be not villain but victim.   From Sir Toby’s point of view, he focused on Gray as the bad guy so that he would not have to face the idea that there was some defect that prevent nice young ladies from falling in love with him, for keeps. After all, Lucy was able to transfer her life long crush to Jeremy and Sophia fled England and risked social ostracism in order to NOT marry him.

The romantic conflict is very real. It was very poignant when Sir Toby asks Bel whether she can love him for himself and not what he can do for her. Toby needs someone to love him for who he thinks he is but because of his love for Bel, he tries to become a better man. I question whether Bel really understood this; whether she could see past her own myopic fear of love. From Bel’s standpoint, she cannot love because her mother loved too deeply and was hurt by Bel’s father’s philandering ways. Bel doesn’t want to be that kind of victim. She is afraid her love will turn her mad like her mother. Bel’s fear about love isn’t about Toby; it’s about her and whether she can open herself up enough to accept Toby’s love.

There is also a sweet secondary romance between Josiah and a friend of Lucy’s who is a female physician.   Josiah, a man who lives with prejudice of others, has to come to grips with his own.   It’s hard to characterize this as an interracial romance, though, because so much attention is paid to the female physician’s “otherness” and not very much on Josiah’s.   I kept wondering whether Josiah would be accepted at society parties and whether anyone would do business with Grayson Shipping with him in charge.   I would have liked some discussion in the book on those points because I kept wondering about it and it brought me out of the story.

The prose in this story is of a very high quality and Sir Toby, who I found to be a flibbergibbet of a man in Book 1, Goddess of the Hunt, was certainly redeemed.   At it’s core, there is a tender romance. You really are skilled at making characters fully alive for me, else I wouldn’t have such a strong reaction.  I cannot get away from the fact, though, that it really affected my enjoyment of the Surrender of a Siren.   If I had read A Lady of Pleasure and not the previous two, I would probably give it a B- because I disliked the character of Bel.

This book was provided to the reviewer by the author. The reviewer did not pay for this book but received it free. The Amazon Affiliate link earns us a 6-7% affiliate fee if you purchase a book through the link (or anything for that matter) and the Sony link is in conjunction with the sponsorship deal we made for the year of 2009. We do not earn an affiliate fee from Sony through the book link.