Review: A Gentleman in Moscow by Amor Towles 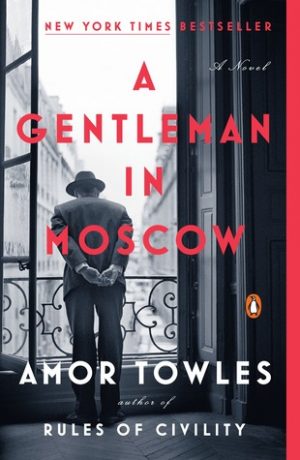 With his breakout debut novel, Rules of Civility, Amor Towles established himself as a master of absorbing, sophisticated fiction, bringing late 1930s Manhattan to life with splendid atmosphere and a flawless command of style. Readers and critics were enchanted; as NPR commented, “Towles writes with grace and verve about the mores and manners of a society on the cusp of radical change.”

A Gentleman in Moscow immerses us in another elegantly drawn era with the story of Count Alexander Rostov. When, in 1922, he is deemed an unrepentant aristocrat by a Bolshevik tribunal, the count is sentenced to house arrest in the Metropol, a grand hotel across the street from the Kremlin. Rostov, an indomitable man of erudition and wit, has never worked a day in his life, and must now live in an attic room while some of the most tumultuous decades in Russian history are unfolding outside the hotel’s doors. Unexpectedly, his reduced circumstances provide him a doorway into a much larger world of emotional discovery.

Brimming with humour, a glittering cast of characters, and one beautifully rendered scene after another, this singular novel casts a spell as it relates the count’s endeavour to gain a deeper understanding of what it means to be a man of purpose.

I don’t often peruse bestsellers list books, and if I do, it is usually some years later after many, many people read them and some friends whose tastes run close to mine recommend one. After such recommendation, I finally ordered this book from the library. The topic (Russian history) also added to the desire to check this one out.

Of course usually when the book is on the New York time bestsellers list the writing is great and this book is no exception. I highly recommend checking out the sample though, because at times it did go into the overly descriptive category for me, but overall it worked. Since I checked out the book from the library, it looks like I cannot share any quotes in my review.

Actually it was quite hard for me to figure out how to review this book. Besides saying the language is great, I am not really qualified to discuss the details of how the book was written, and the story does not really have much plot which I like to discuss in my reviews.

Comparatively speaking though, this book ended up having more plot than many literary fiction books have. I found the initial premise incredibly silly – because no, Alexander Rostov would not have been ordered to live his life in a luxury hotel, under so called “home arrest”. He would have been put in the real prison or, which would have been way more likely in 1920s, shot. I decided to go along with the premise and see if it holds up as a vehicle of examining Alexander’s character growth.

As such, it did work for me. Alexander was a lovely character, full of quiet dignity and interesting philosophical insights. He built an actual life for himself inside of the Metropol, he found friends, life purpose and actual work. It is also possible that he found love.

I was very curious how the author would address the horrible events taking place in Russia during the thirty something years Alexander was supposed to be in the Metropol, because overall the narrative certainly did not give me a tragic feel. I saw the word “charming” describing the book in several reviews and I think it is an appropriate description.

For the most part the way the tragedies of the second world war in Russian history were mentioned worked, it was mentioned briefly – as much as it touched the characters who interacted with Alexander, but for me in this book it was enough. Although I am not sure if I bought that the second world war affected them that little – devastation should have touched the hotel itself more. I mean, the tone of the book would have became more grim, but if the book wants to be a historical fiction, I think it would have been unavoidable.

It was nice for once to understand the vast majority of the references and foot notes in the book. When I am reading American literary fiction and it is full of foot notes, more often than not I feel as if the information in those is very new to me.

In the last seventy to eighty pages, the narrative actually treats us to a little adventure which also worked for me because of the purpose of the said adventure for the character who will remain unnamed because of the spoilers. What I do wonder about is whether the ending for Alexander is meant to be optimistic or not. I found the ending to be VERY fitting for his character arc, but if it was meant to be optimistic, the author was being naïve. And I love optimistic endings.

I was sorry to say good bye to Sasha and the last thing I am still wondering about was whether his last name was meant to invoke any associations to my favorite character from War and Peace. Honestly besides both of them being nobles I have not seen many.

→ Sirius
Previous article: REVIEW: Yinka, Where Is Your Huzband? by Lizzie Damilola Blackburn
Next Post: CONVERSATION: What’s Important to You in a Review?