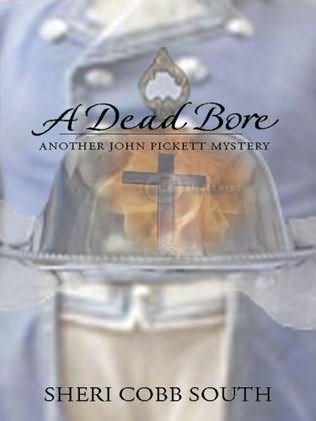 I love that you’re working to get your books released in ebook format and hope that this series will eventually be available electronically. It deserves a wider audience than I’m afraid it’s going to get as hardcover releases from a small press.

“A Dead Bore” refers to the first victim in this second book in the John Pickett mystery series. Julia Bertram, Lady Fieldhurst, desperately wants to escape the boredom of London. As a recent widow, she’s unable to take part in most society events. Yet the thought of either staying with her mother-in-law in the dower house or visiting Brighton with her BFF, and running the risk of encountering the man who had hoped to become her lover, is not to be born.

It is with relief that she receives an invitation to the Yorkshire countryside. She’s not quite sure why Lady Anne Hollingshead did so but, no matter, it will get her out of London. With warnings from her friend of the dire boredom sure to await her ringing in her ears, she sets off. And suffers through her first dinner seated beside the local vicar as she begins to pick up on all the underlying currents seething through the room.

When the dinner party breaks up, no one realizes that before the night is over, one of them will be dead. Julia knows she heard a gunshot during the night and fearing that murder has been done, she sends to London for John Pickett, the Bow Street law officer who cleared her in the murder of her husband two months ago. Can he catch a killer in the wilds of the countryside while posing as Julia’s footman?

The humor, attention to historical detail, and deft characterization present in your other novels is delightfully in evidence in “A Dead Bore.” Once the murderer is revealed, the person’s identity and actions matched a few things I knew had to have taken place. The motive behind the deed again fits what police still look for today when lining up their suspects.

As votermom mentioned in a comment on “In Milady’s Chamber,” I loved so many of the characters in this book. And as much as it’s possible to feel sympathy for a murderer, I did. John rediscovers that bringing the guilty to justice often can and will affect those around them. Julia sensibly limits her involvement in the investigation to what she can handle – noticeably not being keen on helping John examine the body – yet proves her value with several key bits of information which John would have been unable to easily learn. While we see John growing in confidence as his experience increases.

As you promised, the fledgling feelings between Julia and John Pickett are beginning to show. John has been hopelessly in love with Julia for months but now Julia is just beginning to see him as more than the man who saved her life and with whom she helped to solve her husband’s murder. The social gulf is still there yet you show that a relationship between members of differing social classes is not unknown, albeit rare and usually clandestine.

I wonder if the fact that Julia called on a Bow Street Runner and secretly introduced him into the household with whom she was staying will affect her socially? The information is sure to get out and I would think social hostesses might think twice before inviting her to their homes in case she thinks a secret needs to be solved.

I hope there will be further adventures for John and Julia. They are wonderful creations who take part in well plotted stories that are sure to please both Regency and historical mystery fans. B