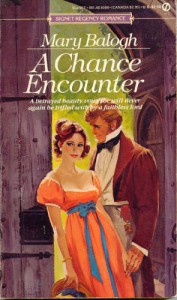 A friend loaned me A Chance Encounter, one of your earliest books. Given that the book is twenty-five years old and does contain a few elements that I associate with romances from that era, I was surprised at how much I enjoyed it. I know some of your traditional regencies are being reprinted and hope that this one will eventually join them. It may be slightly outdated, but it is also enormously engrossing.

The opening of A Chance Encounter bears some resemblance to that of Pride and Prejudice. The town of Granby is agog to learn that a wealthy young man, William Mainwaring, is about to begin residing in the manor house he inherited from his uncle. Not only that, Mr. Mainwaring is bringing company with him.

In very little time, Granby is rife with speculation as to what William Mainwaring looks like, whether he is married or single, and what kind of balls and parties his presence in Granby might occasion. One thing is certain, Mrs. Rowe decides. Her daughter’s Cecily’s wardrobe must be updated in honor of Mr. Mainwaring’s arrival. And Miss Rossiter, Cecily’s companion and former governess, should obtain a new dress too.

But Elizabeth Rossiter does not want a new frock. She is perfectly comfortable in her gray dress, and for all that she is twenty-six and well born, she has no interest in catching an eligible man’s eye or indeed, in marrying. Elizabeth prefers to blend into the background. And she is trying her best to do just that when William Mainwaring and his friends pay a return call on the Rowes, and among the party is the man she once loved.

Robert, now the Marquess of Hetherington, was a penniless younger son when Elizabeth met him during her one season in London. At first the two became friends, and then they became smitten. Exactly what it was that separated them isn’t revealed until late in the book, but it’s clear that neither one is interested in rekindling the relationship.

Yet despite her polite coolness to Robert, and his own coldness to her, Elizabeth is unhappy to see Robert turn his charm full force on her charge, Cecily. She does not want to see the girl’s heart broken, and grows even more agitated when she learns that Miss Norris, one of William’s guests, has every expectation of a betrothal to Robert.

Meanwhile, William Mainwaring begins to open up to Elizabeth, and she realizes that he is not toplofty, but merely shy. He begins to charm her by coming out of his shell, and Elizabeth realizes that she could easily grow to care for William, and that William is developing feelings for her.

But how can she allow herself to love William, when Robert is his friend? Is she truly over Robert, and if not, would it be fair to encourage William? Yet if she discourages William, will she be cheating herself of the happy future she could otherwise have?

A Chance Encounter is written in omniscient third person viewpoint and while we get much access to Elizabeth’s thoughts, there is almost none of the hero’s POV. You’ll notice that I have tried not to give away which of the two men Elizabeth ends up with, so I will just say that since we get very little of his POV, this character is not as fleshed out as Elizabeth.

Like Elizabeth, I had a tough time deciding which of the men she should be with. I wasn’t always crazy about the man she ultimately chose. And although by the end of the book I was fine with the choice she made, I felt for the other guy, too. My enjoyment of A Chance Encounter was therefore centered less on the development of the romance itself, and more on the characterization.

Many of the side characters in the town of Granby were delightful, from the tongue-tied girl Lucy Worthing, to the sparring Cecily and Ferdie, who might or might not marry someday, to my favorite, Mr. Rowe, whose fatherly banter with Elizabeth, whom he referred to as “Cinderella,” charmed me to my toes.

But what really made this book click with me is the restrained Elizabeth, who keeps her deep feelings below the surface. She is fiercely independent, but most of the time, not in a way that feels anachronistic. She also has a wry sense of irony, a stubborn will and a kind heart.

I loved watching Elizabeth grapple with the choices facing her, which were not just marriage to William or marriage to Robert, but also, a life as Cecily’s companion, or governess to some other family, or staying with her brother and sister-in-law. Because Elizabeth considered most of these options, often weighing them thoughtfully yet occasionally acting impulsively, she was a heroine whose depths absorbed me so much that I lost track of time reading the book.

As mentioned above, there are some old fashioned elements to this book, both in terms of the plot and in terms of the characters’ behavior. Unfortunately I can’t go into them in details because they involve big spoilers, so suffice to say that I felt some of what kept Elizabeth and the man she chose apart was contrived. I did like the plot twist in the middle of the book, though again, to say what it is would be to spoil it.

Readers should also be aware that the sex in A Chance Encounter amounts to no more than a couple of paragraphs, and that is not really surprising given that the book was first published in 1985. I didn’t feel this as a lack, though, because the book absorbed me so deeply. A Chance Encounter gets a B/B+ from me.

This book can only be purchased used and it is fairly expensive. Hopefully it will be reissued by Signet or Ballantine who is currently republishing formerly out of print Balogh regency titles.