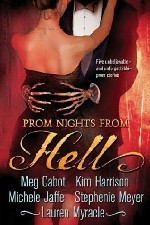 Prom Nights from Hell is a thoroughly entertaining collection of stories from five of the top teen writers in the business. The fresh and fully realized worlds will engage the entire spectrum of readers from tween to adult. While not all of the stories are self contained as some appear to be introductions to future series, there is enough to satisfy. What makes the anthology really shine is the variety of riffs on the same theme: prom night gone bad. Every author tells a unique and different tale from various points of view. Even the guys aren’t left out. Overall, this is one of the best anthologies I’v read of late and would rate the book a B+.

You open the anthology with The Exterminator’s Daughter. Mary is not your normal high school student. She’s a vampire killer’s daughter. Mary’s mother was The Exterminator of all kinds of otherworldly bad guys until, well, the bad guys got her. Mary is determined to take vengeance starting with killing Sebastian Drake, a descendant of Dracula. Besides being a vampire and all around bad guy, Sebastian has lured Mary’s new best friend into his web and plans to turn Lila on prom night. Adam, Mary’s classmate, is as determined to help Mary as Mary is determined to shun him. Adam shows Mary that revenge needn’t be undertaken alone.

The issue with this story is that each chapter is told from a different point of view and there were so many characters that I was unable to figure out who was whom until about the second to the last chapter to sort everyone out. B-

The Corsage is a horror story which shows us the danger of teenage capriciousness. Frankie, Will, and Yun Sun go to a psychic to have their fortunes read. Frankie is hoping that this visit will spur Will into asking her to prom. While there, Frankie notices a dried corsage on the psychic’s shelf. The psychic is reluctant to tell the teens about it but Frankie pushes the issue. The Corsage is a wish charm. Three wishes can come true but there is obviously danger in the wishing. Frankie’s wish is for Will to get the courage to ask her to prom. She knows that he wants to but he can’t quite bring himself to the point. Magic has its dark side and you need to be careful what you wish for.

Despite its predictability, this entry was sweet but emotional. B+

Madison Avery and the Dim Reaper had a great fantasy construct but attempted too much in a short space without providing a full story. Madison is disgusted at being in stuck in podunk town with her father where her mother sent her after Madison was caught sneaking out. She’s rude to her prom date and he spurns her. When a sexy young man asks her to dance, she sees an opportunity to get back at her date and the rest of the world. But the sexy young man is dangerous and will kill to get what he wants.

To some extent, while interesting, this novella felt more like an advertisement for future books in this world. B-

Kiss and Tell was my favorite entry. In a marked contrast to the Cabot and Harrison offerings, you provided a shorter cast list and a tighter plot; plus, the fully contained story could be translated into a larger series without confusing the reader. I could envision following Miranda Kiss from story to story as she angsts over being a teenage misfit by day and saves people by night. Miss Kiss has superpowers. Super hearing, super strength, super speed. But being super has led her to being cast from foster family to foster family until she finds a place at a boarding school. While a senior, Miss Kiss is busy trying to hide her super deeds from the local sheriff deputy who also happens to be a hottie; her part time roller derby pasttime; and her chauffering for the owner of the roller derby team.

Complicating this is the fact that Miranda had only one date and one kiss with high school crush Will who hasn’t talked to her since their disastrous outing and who is going with someone else to the prom. She’s taken to reading self help books that give spectularly bad advice.

Enter Sybil, a young girl that wants to kiss as many boys as possible and eat as much food as possible before the day is out. Miranda is to chauffer Sybil to a house but when Miranda drops her off, she can’t help but escape the feeling that something really bad is about to happen to Sybil. Miranda and Sybil will need their brains, Miranda’s super powers, and the prom to save themselves and maybe even the world. A-

Hell on Earth is a great take on the angel/demon thema swirling around the paranormal romance world. The protagonist is Gabe, a high school student who feels compelled to help people. He can sense when someone needs his help and he really enjoys doing it despite getting suspended for decking a predatory teacher or getting teased for setting up so many couples. But Gabe has a knack of making people happy and when they are happy, he is happy. He is such a decent guy that when his date to the prom, Celeste, finds someone else’s arms (many other elses) more comfortable, he’s worried about whether he needs to take her home. He is also left wondering why prom night is turning into such a sad debacle with couples breaking up left and right.

Sheba is the cause. She’s a demon and her job is to make people unhappy. Sheba does a great job of it. She uses Celeste to move from boy to boy, tempting them into dancing with her and kissing her in front of their dates. She uses Cooper, a rich young kid, as the ultimate instrument of her maelstrom. heba’s plans are interrupted by Gabe who senses that she needs him in a way that no one else does.

This does touch on school violence and it is possible that given the recent events that some may feel a portion of it was glib. I don’t want to spoil the book but I want to provide the necessary information for readers In this story you show yourself to be a master at making the swoon-worthy high school boy. B+