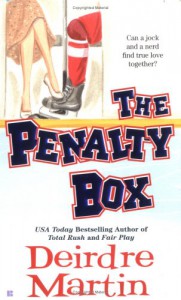 You are a very uneven author for me. I loved your debut book, Body Check. Moderately disliked the second book, Fair Play, and did not finish the third, Total Rush. I honestly had written you off after Total Rush and wasn’t going to buy another book by you. After reading a review of Penalty Box, I looked the book up at my local library. It was in and I figured if it was a total wallbanger, I hadn’t risked much. After I finished the story, I ran to Barnes and Noble and bought my very own copy.

You, like Marianna Jameson, have a great voice for modern contemporary characters. Your dialogue exchanges were fresh and fun. The courting ritual seemed realistic. I could envision these characters in my head.

Katie Fischer was an unattractive, overlarge high school student who was the brunt of many jokes. She grew up, lost weight (through dieting and exercise), and went on to be a sociology professor. Katie comes home to Didsbury, CT, to write her book on pro athletes and to help her mother take care of Tuck. Tuck is Katie’s nephew. Tuck’s mom is in rehab, again. Paul Van Dorn (who some might remember from Fair Play) lives in Didsbury, CT, after too many sticks to the head forced him into early retirement. Paul owns a bar called The Penalty Box and goes there each night to relive his glory days. So Paul is shaped by his glorious past and Katie, by her painful past.

Their initial courtship is a riot. Paul is chagrined to find that the hot woman at the high school reunion was someone he mocked in high school. Katie is chagrined to find that she is attracted to Paul. Paul agrees to be interviewed by Katie, not because he is particularly interested in her book but because he’d like to get in her pants. But Paul realizes he likes Katie. She’s hot, smart, and fun to be around. Katie is attracted to Paul because he is hot, smart, and fun to be around. The problem is that Paul likes to live in his past and Katie is trying to escape it.

There are some LOL funny scenes in the book. The first one is the “first date” between Katie and Paul. Katie is very weight conscious. Paul decides to pack a picnic lunch full of very fattening things. He’s trying to be suave. Katie’s trying not to eat. She ends up drinking too much wine and after their first kiss, she throws up. It’s a hilarious scene that had me chuckling out loud.

I know that some will be disappointed by the lack of hawt sex, although there are sex scenes and nice ones at that. I also think that the resolution of the story was a bit rushed. It was a story that could have used an epilogue. One thing that I think hurts you and authors like you and Ms. Jameson is that these books could easily be marketed as chick lit instead of romance and you may do better in sales. This is a solidly character driven story and if the reader doesn’t like Katie or Paul, it isn’t going to work for them.

I enjoyed it and it looks like you are returning to fine form. Look forward to the next book. B+.