While it’s true I’m not a fan of your succubus novels, I do enjoy your young adult books.   In fact, I vastly prefer your voice in that genre.   When Jane linked the Publishers Weekly article about how well your Vampire Academy series was doing in this post-Twilight world, she suggested I review them here.   Since I never did review them here, I realize I’ve been remiss in my duties.   Now is as good a time as any to rectify that error.

In the Vampire Academy world, there are two kinds of vampires: Moroi and Strigoi.   Moroi are living vampires, able to tolerate weak sunlight for short period of time and to wield magic from one of the four elements.   Strigoi are their evil counterparts — the undead vampires with which we are more familiar.   Unlike the Moroi, they are unable to wield magic and tolerate the sun but to compensate, they are immortal (unless killed by one of the classic methods: stake through the heart, fire, or decapitation) and ridiculously strong.   Strigoi can be created by one of two ways: a Moroi kills another living being by draining them of blood, which then transforms them into a Strigoi, or a Strigoi drains a victim of blood and then gives them their blood in return, which then turns the victim into a Strigoi.   In addition to the Moroi and Strigoi, there are dhampir: half-vampires who serve as the guardians of the Moroi against all threats, including and most particularly the Strigoi. 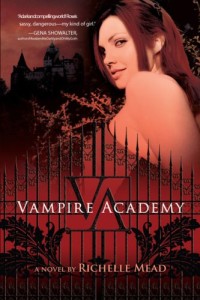 Vampire Academy introduces series protagonist, Rose Hathaway, a dhampir whose only desire in life is to protect her best friend, Moroi princess Lissa Dragomir.   Two years ago, Rose and Lissa ran away from St. Vladmir’s Academy.   Unfortunately, they’ve finally been found and dragged back in disgrace.   But there’s more than meets the eye going on here; Rose and Lissa ran away for a reason, not because they were being needlessly reckless and immature like everyone assumes.   Much of the book’s mystery revolves around discovering the reason why they left and how it relates to things going on in the present.

While Vampire Academy is an enjoyable read and an entertaining example of the vampire teen novel, it doesn’t really bring anything new to the table.   We have a sassy protagonist in Rose.   We have a supernatural boarding school in St. Vladmir’s Academy.   We have the forbidden romance between 17-year-old Rose and her 24-year-old mentor, Dimitri.   We have Lissa’s conflict between following social mores and sticking with her elite social Moroi circles or choosing to spend time with Moroi outcast, Christian, whose parents turned Strigoi.   We have catty rivals who wank to bring both Rose and Lissa down, and demanding teachers who have no patience for Rose’s attitude and mouthiness.   There’s really nothing new here.   It executes a familiar storyline well, but there’s nothing particularly innovative about it — with one exception.

Rose and Lissa have a unique bond that has existed between them since a car accident in which Lissa’s parents and older brother died and only Lissa and Rose survived.   Because of this bond, Rose can sense Lissa’s feelings and even locate her.   Sometimes she can even slide into Lissa’s head and see through her eyes.   When I first read this book, I thought the occasional sliding into Lissa’s head was a cheat in that it let us conveniently see from another perspective to fill us in on story gaps but having read the next two novels in the series, I now realize it was just setting us up for things to come.   B- 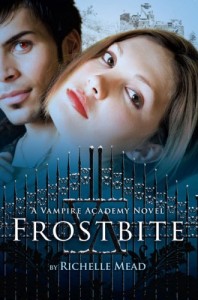 In Frostbite, Rose’s Qualifier (a sort of interview-like exam which dhampir novices must take to determine their competence in becoming guardians) leads to disaster when Rose and Dimitri arrive at the interviewer’s home to discover that he and his Moroi charges have been murdered.   It’s a complication no one predicted.   One thing that’s remained consistent about Strigoi is that   they’re notoriously incapable of working together.   The attack proves otherwise because a number of Strigoi would have been needed to take out all the guardians and Moroi in the house.   Even worse, it looks like humans are involved — and they’re on the side of the Strigoi.   This is bad.   Because while the Moroi have their dhampir guardians to brave the bright sunshine without ill effects, the nocturnal Strigoi traditional have no one.   Human conspirators change the playing field in a way Moroi hadn’t anticipated.   As more attacks on Moroi incite panic in their society, the students at St. Vladimir’s are sent to a ski resort during the winter holidays, to serve as a sort of haven for them and their families who come to visit them.

Even though I felt that the Strigoi attacks on Moroi society served more as a convenient plot excuse for the students to have a field trip rather than the major, society-shaking events they were, I did like how this book explored Rose’s conflicted feelings regarding her best friend, Lissa.   For one, it showed the downsides of being able to slide into Lissa’s head (like when she’s having sex with her boyfriend).   Talk about awkward.   One thing I’ve always liked about Rose’s character is that she’s that girl you knew in high school — the good girl who had a reputation for being a slut.   Because while she is an incorrigible flirt — or used to be because she realized the gravity of being a guardian and the price you have to pay for your duty — she’s still a virgin.   It’s a nice reversal to have the delicate princess Lissa be the sexually active half of the pair while Rose is relatively chaste.

I also liked the way Rose struggles with her feelings for Dimitri.   I’m probably in the minority in that I didn’t care either way about the forbidden Rose-Dimitri relationship.   I wasn’t invested in their romance in and of itself.   I was more interested in the way Rose grappled with it, tried to deny it, and tried to make things work with Mason, who’s perfect for her in every way — except for the fact that she can’t make herself feel for him what she feels for Dimitri.   I must admit, however, my interest perked with the introduction of Adrian.   I don’t really expect anything romantic to develop between him and Rose, but I just like his character.

So even though the overall plot itself didn’t really impress me, I really liked Frostbite for the final 50 or so pages in which Rose learns the grim realities of battle and that even the best laid plans only last until the first encounter with the enemy.   And, of course, the awkward — but very realistic — depiction of Rose’s troubled relationship with her long-absent but legendary guardian mother.   B- 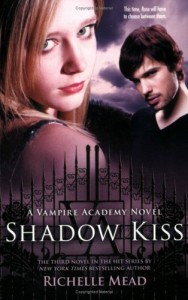 Shadow Kiss continues Rose’s maturation as a character, woman, and warrior.   As the title suggests, it explores Rose’s bond with Lissa and its effects on her.   As with its predecessors, the plot serviceable but what really makes the book is Rose’s realization that Moroi society is broken, dying in its stagnation, and the ways in which that clinging to tradition affect every aspect of their lives.   As more evidence comes in, proving that the Strigoi are gathering in united numbers the likes of which no one has ever seen, it becomes more and more apparent that the Moroi must adapt or die.

What I found more interesting, however, was how this struggle against deeply seated Moroi tradition was mirrored, or more closely focused if you will, by Rose’s realization that she’s given up so much for Lissa.   It’s a kind of loss of innocence — all her life, she’s wanted nothing more than to be by Lissa’s side always, protecting her and being her best friend, but as the story unfolds, we see that Rose actually resents it.   She might actively deny it, but the way she refuses to think about it or changes the subject when it comes up suggest that she doesn’t dare think about the alternatives because to do so might destroy her entire worldview.   Those therapy sessions regarding her supposed PTSD only support this, as does the ending.

But what makes the book, what truly made the book for me, is the climactic battle where the Moroi’s greatest fear becomes reality, the results of which finally drive Rose to cast off the expectations and traditions Moroi society has placed on her.   I don’t want to spoil but the ending here is what finally made me interested in the Rose-Dimitri relationship.   Again, not so much for the romantic aspect, but in the sense of what it means for Rose, what it makes her do, and how it influences her character development.   That’s all I’m going to say here.   B

If I have to pick a favorite book in the series so far, it’s definitely the third one, Shadow Kiss.   One of the things that frustrates me about vampire books is that they introduce these new vampire worlds and settings but don’t always explore the ramifications of the worldbuilding rules they present.   Shadow Kiss was the first book in the series where I felt a lot of the problematic things about the Vampire Academy world were addressed.   It’s obvious from here on out that things will not be easy for Rose and that her choice at the end of the book will have aftershocks — on St. Vladimir’s and on Lissa, most especially.

Another thing I liked about the book was that it was where everything changed.   You know how if you read enough books of a certain type, you start getting a feel for how a story will unfold?   Well, what happened in Shadow Kiss (and people who’ve read the book will know exactly what I’m referring to) really caught me off-guard.   I wasn’t expecting that at all but then I looked back over the previous books and realized that it’s been hinted at since the very beginning.   In some ways, it does remind me of a certain season of Buffy the Vampire Slayer but since that was my favorite season, I’m not complaining.

In the end, I think the highlight of this series for me is Rose.   We talk about stories and the heroines who live them, the changes and character arcs they go through to read the happy ending they work for.   But when it’s done well, really well, it stands out in a reader’s mind.   Rose’s story is one of those.   She’s a character who does not stagnate.   Oh, her basic personality stays the same — she’s sassy, fierce, and a smartass through and through — but the Rose we meet in Vampire Academy is the not Rose who rejects Moroi expectations at the end of Shadow Kiss.   There’s no way Vampire Academy Rose would have made the ultimate choice she did in Shadow Kiss.   And for that, I am very glad because a series protagonist who doesn’t grow and change from one book to the next is a boring one indeed.

These books can be purchased in trade paperback form from Amazon

. Vampire Academy, Frostbite, and Shadow Kiss can be purchased from the Sony Store and other etailers.