A Lily among Thorns by Rose Lerner 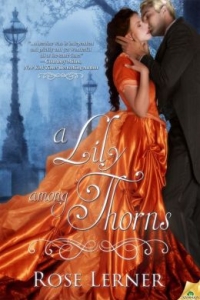 Dear Ms. Lerner,
I’ve read and enjoyed a couple of your books; I gave Sweet Disorder a B and reviewed Listen to the Moon , giving it an A-. While casting about for a romance to read, I realized I had several of your backlist on my Kindle. I chose the one that didn’t already have a DA review, A Lily among Thorns.
The book opens in 1809 in a London brothel. Solomon Hathaway is young (just about to turn 21), drunk, and not all that eager to lose his virginity in this particular time and place, but his school friends urge him on. A working girl picks him out of the crowd right away and takes him upstairs. She arouses him but also puts him off with her barely concealed contempt. Abruptly he decides to back out of the whole thing and impulsively gives her his entire quarterly allowance, which he’s just received, out of guilt and perhaps chivalry. He leaves just before he can vomit in front of her.
The story cuts to 1815 London; Lady Serena Ravenshaw has a visitor at her place of business, an inn called the Ravenshaw Arms. Solomon Hathaway has come to see her not for the food or lodging her inn provides, but rather for her reputation as an underworld conduit, a fixer, and specifically in his case, someone who can find lost items. A family heirloom – a pair of ruby earrings – has been stolen, and Solomon needs them back for his sister’s upcoming wedding. Family lore says that the earrings were supposedly given to an ancestor by Charles II in return for hiding him from Cromwell’s troops and confer good fortune on brides who wear them on their wedding day.
Serena recognizes Solomon as the nauseated young swain from the brothel years before, though it takes Solomon a bit longer to recognize her. She’s intrigued by him; she’s thought of him often over the years. Serena impulsively takes the opportunity to get to know Solomon better – she offers to help him, but only if he stays at the Ravenshaw Arms for the duration of the search. Solomon is a bit flummoxed by the request, but he’s desperate to recover the earrings (and also attracted to Serena), so he agrees.
Serena and Solomon are both somewhat unconventional characters, especially by historical romance standards. Lady Serena Ravenshaw grew up in an aristocratic family, but ran away from home after a liaison with a footman. She chased the footman to London after he was let go, but couldn’t find him, and ended up being taken up by a madam and put to work. After her encounter with Solomon and his munificence, she was able to get out of the brothel but spent several more years as mistress to various wealthy men, amassing the funds that allowed her to buy the Ravenshaw Arms. She’s her own woman, respected and feared at various levels of society, but she’s understandably scarred by her experiences.
Solomon has aristocratic ties himself, but he’s firmly in the trade world, by choice. His father was tutor to a wealthy and titled family but fell in love with one of the daughters of the family; they ran away together. On his mother’s side, his uncle the Earl of Dewington has helped with Solomon’s education, but Solomon has spurned further ties and chooses instead to work for his other uncle, on his father’s side, in the family tailoring shop. Solomon has a passion for chemistry that he puts to good use creating dyes – he boasts that he can match any color – as part of his work in the shop. Besides work, Solomon doesn’t have much of a life when he and Serena meet again; he has been mired deep in grief for the past year after his twin brother’s death in France.
So, we have a set-up that’s somewhat unlikely, and characters who are even more unlikely, and a plot that starts kind of messy and gets messier. Serena’s father shows up, threatening to have her thrown into Bedlam. Then her friend and erstwhile business partner, Rene, marquis du Sacreval, also turns up at the inn. Serena is at first overjoyed to see him, until he drops a bomb on her: he wants the inn, and he’s drawn up fake marriage lines between them to ensure that he gets control over it. Serena is gutted to have one of the few people she trusted in the world betray her so viciously; Rene knows what the Ravenshaw Arms means to her; what independence it gives her. What’s odd is that she doesn’t ever probe very deeply into WHY he’s doing what he’s doing (and the ultimate explanation makes his actions seem like overkill and thus a plot contrivance, honestly).
As noted above, I found the plot of A Lily among Thorns to be a bit of a mess – luckily plot is low on my list of priorities in a historical romance. We have the earring plot, but that quickly is put far in the background in favor of the “Serena has to prove she’s not married to Rene” plot. Caught up in that is an espionage plot, which includes some developments I’ll spoiler-hide since they occurred at the 40% mark.

Solomon’s twin brother Elijah is not dead, but he’s gay, a spy for Britain, and involved with Rene on several levels. Him not being dead wasn’t too much of a surprise (though I don’t remember what telegraphed it; maybe it was just a certain vagueness about the details of his death that made me suspicious). Him being gay and a spy was definitely not a surprise, given Rene’s reaction when he first meets Solomon and mistakes him for his twin, whom Rene knows by a different name.  Rene’s sexuality is already pretty clear and Serena admits to Solomon early on that she knew Rene was a French spy.


There were some interesting dynamics with Solomon’s family – much, but not all of it, related to the spoiler above. Solomon is proud of his middle-class roots and not entirely appreciative of his aristocratic ones. He dislikes the way his former schoolmates needle him for having a lowly profession, but he’s chosen the path he wants and is doing what he wants with his life. He has a certain puritanical streak that comes, no doubt, from being raised by a clergyman, but he’s not ashamed of Serena or, generally, too judgmental of her (which I liked as a character trait even while finding it somewhat unrealistic).

I wish I’d understood Serena’s attitude towards her own family better – we know that her father is awful (the Bedlam threat established that pretty well), but I still felt like the details were scant. Serena was clearly rebellious and unhappy at home – a gently bred girl doesn’t become a London prostitute on a whim – but I wanted more information than we were given on both her father and mother (the latter apparently was loving but weak and incapable of standing up to Serena’s brutish father).
Midway through the book Serena finds out something about her father that makes her realize just how dangerous he is, but there was still a strange imbalance in his portrayal. Maybe it was because he wasn’t that prominent of a character, or because it feels more like Serena has made the choices she’s made out of natural rebelliousness and because she was being stifled at home, when there’s a lot of evidence pointing to something darker that never materializes.
The characterization was what really made A Lily among Thorns – Solomon and Serena were both appealing and well-suited in spite of (because of?) their very different backgrounds. Solomon is truly a lovely beta hero (he bakes!), and I thought the book did an excellent job with the experienced heroine/inexperienced hero trope (if Solomon isn’t a virgin – I don’t think it’s ever stated, which in itself was refreshing – he’s definitely no rake).
What keeps the book from being A level is the messiness and a sense of inconsistency with Serena’s background and character, and the way she’s portrayed in relation to other characters. I really *liked* Serena, and she felt real to me in the little details, but in larger sense so much of her portrayal felt unlikely. An aristocratic girl hooks up with a footman – okay, maybe. She follows him to London when he’s turned off – okay, I guess. She becomes a prostitute (it wasn’t clear how much of that was even a choice on her part, at first; she certainly didn’t seem very happy about it when she first met Solomon) – whoa; this is where I really could have used a bit more understanding of her background. We’re told she doesn’t just go home because of her father and she continues to prostitute herself to spite him, but that seemed unrealistic, given her upbringing and the realities of being a brothel worker in 19th century London.

Anyway, from there she goes from prostitute to mistress – this I could believe; in for the penny, in for the pound. And even a certain inconsistency in her attitude towards her sex work could be seen as a positive – not every ex-hooker has to be tragic and ashamed, so Serena can be unapologetic about her past while at the same time acknowledging internally that she didn’t like a lot of it.
But then she acquires her inn and from there she not only seems to easily straddle two disparate worlds – ex-prostitute and titled lady – but she somehow has managed to become a feared figure in the London underworld, and how and when *that* happened is never explained. She regularly waits on her ex-clients at her inn, and manages to deal with their often boorish behavior and references to her past profession with aplomb. I guess this would make sense if the Ravenshaw Arms were a kind of risqué place where the hoi polloi went slumming. But at one point the Prince Regent shows up for dinner with his aristocratic friends and their wives. That really didn’t feel right – I don’t pretend to have comprehensive knowledge of Regency social practices but the crème de la crème of society going to dinner at an inn, never mind one owned by a former prostitute that most of the men have slept with, and bringing their wives along – felt really off.
Whew. Okay, I feel better now. Just had to get that off my chest. FWIW, though, A Lily among Thorns remains an above-average historical romance with smooth prose and good characterization. My grade for it is a B+.
Best regards,
Jennie