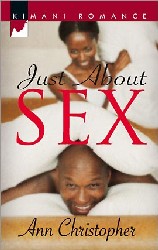 The cute cover and good word of mouth encouraged me to pick up this book. This is my first Ann Christopher novel, and while not perfect, it won’t be my last. The main characters were appealing: the hero with his cluelessness about women and the heroine who struggles with her mother’s relationships influencing her own. Toward the latter third of the book, the plot careened perilously close to wall banging status but you managed to right the ship and close endearingly.

Sex therapist, Simone Beaupre, is at a high point in her career. She has got a successful practice, is just about to release her first self help book, and her weekly advice column is being considered for syndication. This road to success encounters a very large and angry obstacle in the form of Alex Greene. Alex is the topic of one of Simone’s latest column where a disgruntled ex girlfriend writes a letter of complaint about her lover’s small penis, thinly disguising the ex-lover as Alex G.

Alex demands a retraction and apology. Simone refuses. In retaliation, Alex sets up a blog calling Simone a quack and challenges her ability as a sex therapist. This negative publicity starts to concern the syndicators and may hamper Simone’s dreams of financial security.

Only when encouraged to sue Alex to get the blog taken down, Simone refuses because she has a big secret of her own that can’t come out. Simone is a virgin. Ordinarily I hate the virgin sex therapist theme, finding it trite and overused. It may still be trite but you managed to convince me that Simone had an exceedingly large and influential baggage in the form of her mother who has spent her life essentially being a high priced whore, moving from city to city, looking for a man to constantly take care of her. Simone’s childhood experiences makes her extra cautious and because of career and fear of relinquishing her independence, ridding herself of her virginity never came about.

The highlights of this book are the characterizations of both Simone and Alex. Simone is believable as the vulnerable daughter, competent therapist, and conflicted woman. Alex is full of one part masculine charm and one part masculine naivete. He believes he has always satisfied a woman, but when he starts revisiting his past, he realizes that sexual pleasure didn’t really always translate into emotional satisfaction. He feels quite badly about hurting the women in his past by his indifference. He goes about wooing Simone and shows himself to be an honorable man despite his questionable blogging activities.

In the latter third of the book, Simone’s hangups get to be a bit tiresome, particularly in the face of such a charmingly written male character. I was disappointed in how long this was carried on and felt that her neurosis was almost artificial toward the end. Fortunately, she came to her senses and the ending was endearing. B.