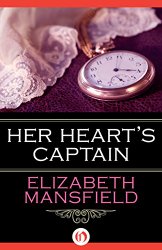 I loved this book. After the disaster I had with the first Mansfield I tried (Passing Fancies) I wasn’t sure how I would do with another one of her books. Thankfully, this one is great.

Jenny and her mother have always adored Jenny’s younger brother, Robbie. He can do no wrong and is obviously his mother’s favorite. When it becomes obvious to her brother-in-law that Jenny’s mother can’t handle and is unwilling to discipline her darling, he takes matters into his own hands and secures a midshipman’s berth for the boy aboard one of His Majesty’s naval vessels. On their way to see Robbie off at Portsmouth, Jenny runs into a gentleman who assists her then castigates her brother for leaving her alone and unprotected. Not until the first letters start arriving from the ship does she realize that the gentleman is Captain Tristram Allenby, her brother’s captain. Robbie’s letters paint a picture of a hellish existence all due to Captain Allenby. With these testaments to the man’s character from their beloved son/brother, the women take him into extreme dislike. What they don’t know is that Tris hasn’t been able to forget the lovely young woman he met and is determined to woo and win her during his short two months leave.

With the clock running on his courtship, Tris arrives near Jenny’s home and starts to try to win her hand. He is charming and attentive and can’t understand why Jenny seems to want nothing to do with him. There are times when she starts to respond to him but then she’ll freeze up again, leaving him bewildered and hurt. His mother has accompanied him (she’s a delight) eager for him to marry and start giving her grandchildren to dote on. While neither can figure out what Jenny’s problem is, both soon realize that she is a person who has always been second to everyone else in her life and both are determined to do something about it. When he learns of the opinion that Robbie’s letters have caused her to have of him, the mystery of her antipathy is solved but sadly he thinks that there is no hope for them. It takes her uncle giving her a true picture of life aboard a British man-of-war and her brother admitting that maybe he did go on a bit much over what is really nothing to convince Jenny of her mistaken beliefs regarding sea captains in general and Captain Allenby in particular. But naval men don’t give up without a fight and one last effort leads to a HEA.

Elizabeth Mansfield wrote lots of regencies. Many are both lauded and hated. This is one I find very satisfying. B+