I laughed a little when I finished this book because it had virtually all the common HP/SD tropes smushed into one small category. We have the secret baby, amnesia, asshole boyfriend with trust issues, evil other woman, and an abduction for added spice (plus the requisite travel to an exotic locale).

There is something kind of fun about a secret baby mistress abduction amnesia story but the melodrama level was a bit too high for me. Essentially the heroine is the mistress of a wealthy developer and she is unjustly accused of selling secrets to his competitor. She’s virtually tossed out of his home and then kidnapped. But once the kidnappers realize that there is no use for her, she is released unharmed. This stretched my credibility even for an HP. As a result of her trauma, she gets amnesia and her lover comes to take care of her and as a result learns that she could not have possibly sold secrets to his competitor. Of course, why he couldn’t have figured out that before, I’m not sure. C 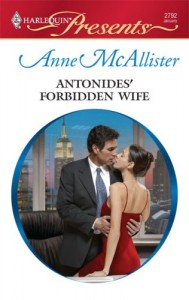 Two words: Asian Heroine. I’m giving this book a B just for that. This might be my new grading scale. Every book with an Asian heroine starts at a B grade from the beginning. Actually, I think I would have given this book a B even without my personal race bias.

PJ Antonides marries Ally (half Japanese) as a favor over 10 years ago and neither bothered to get a divorce. PJ kind of liked the excuse of being married. It was an easy way to fob off his family and other women even though no one was really sure whether to believe him. Ally decides she is going to marry this nice doctor and trots off to see the PJ to get her divorce, only PJ isn’t so sure that he wants this divorce. He tells Ally that he isn’t going to sign the papers unless she pretends to be his wife for an upcoming family reunion. This is a story of mini misunderstandings, unrequited feelings, misaligned stars, and PJ’s charming Greek family.

Note to Harlequin: just because the model has straight hair doesn’t make her Asian. 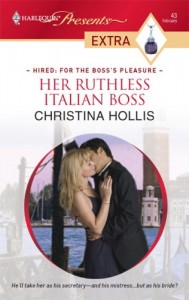 I read this book with a look of wtfery on my face. I could feel it. My face was contorted for at least the first 20 pages, as I tried to figure out what the hell was going on with the characters. Beth met Luca  Francesco a few years ago when Luca was in the army. They were in love but Beth didn’t want to marry a soldier. Or maybe she didn’t want to marry someone poor. Or maybe she wanted to marry Luca but he turned her down. Luca is now one of the richest men in Europe, Beth has no money, and his heart was broken so much that he wants revenge or he doesn’t want revenge, he wants to court her, or something. Seriously, I had no idea what was going on in this story. The motivations of the character were more slippery than a wet fish. Beth was a doormat throughout much of what I read, first lamenting her monetary loss but then deriding any efforts to see to her comfort. Luca hates Beth for leaving him and vows something but also treats her like spun glass.

Ultimately I gave up because, well, it just didn’t make sense. DNF