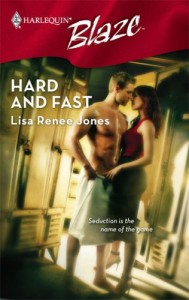 I can’t pinpoint exactly why I bought this book. I think, honestly, that I got you mixed up with a different author (*cough Lisa Marie Rice cough*) whom I wanted to read but hadn’t. So I bought the book and had no idea what it was about at all. Color me surprised when I realized it was a book about baseball. I love sports. In fact, as I sit here writing this review, I am watching the NFL channel. SportsCenter is over. The few books I have read featuring sports heroes have invariably been wrong and I confess to thinking before I had even read the second page that this was going to be a disaster.

Amanda Wright just landed her dream job as the sports reporter for a major LA newspaper. Her predecessor is her competition and has been the beat reporter for LA for years. Amanda is no stranger to competitive sports. Her father is an NFL team doctor, her sister a premiere sports orthopod, and Amanda herself is a former Olympic caliber swimmer until a knee injury derailed her dreams. She’s been hired to write a sports column but has only a short leash. She must rebuild the paper’s sports readership that left with her predecessor, Jack Krass, or her boss will fire her. She’s nervous but game and manages to hold her own and deliver a few smart putdowns for her competition.

Jack’s expression soured until he looked as if he’d been sucking lemons. “Sweetheart, looking good will get you laid, but it ain’t gonna get you a story.”

She laughed, but inwardly the words stung, nestling amongst her insecurities that the only reason she had this job was because she looked good. She eyed Jack’s slightly protruding belly and her response held more bite.

“Right. I most definitely do not want to look good. That makes me a very, very bad reporter. I should drink more beer and get me a body like yours. Then I’ll get lots of stories.” Amanda reached for her pad of paper and pen inside her purse. “I should take notes. What else do you think I need to know?”

Amanda is shown as always envisioning the framing of her next article, making her look like a real reporter. When interviewing Brad Rogers, the ace pitcher, she asks him about his necklace and starts to formulate a personal interest story knowing that “[f]ans gobbled up personal info about the players.”

Brad Rogers is in the twilight of his career, still throwing heat but nursing a hidden injury. He can’t tell management about it because he’s in the midst of contract negotiations and he has a rookie hot on his heels. In a post game winding down period at a local bar, Kurt Caverns, the rookie, needles Rogers and suggests that Caverns is better at everything from pitching to getting women and thus Amanda, the hot new sports reporter, gets tossed into the mix and both men make a bet as to who can bed her first. Brad knows that this is wrong but can’t seem to keep himself from rising to Caverns’ bait.

The truth is though, the attraction between Amanda and Brad is instantaneous. Brad throws out an invitation for an “exclusive” and Amanda reluctantly refuses, knowing that her new career can’t withstand that type of relationship. Eventually, though, the attraction is too hot to be denied and Brad and Amanda embark on a furtive but scorching affair.

Brad’s tendency to be goaded into action provides good suspense. I was ever anxious for the moment that he would blurt out his relationship with Amanda. Or that the two of them would get caught in a compromising position.

The story was full of good male camaraderie that we women love to read and the bullheadedness of men that we expect. The male characters both fulfilled and exceeded stereotypes. The baseball references seemed accurate and were deftly woven throughout the story so that the sports angle was more than just dressing on a mannequin.

This story has similarities to the oft referenced Bull Durham and the constant use of the term “The Show” seemed a bit overdone. Another problem was that Amanda’s easy capitulation to Brad’s seductions bely her claims of being a smart woman and her desire to maintain her dream job. She knows he is bad for her and her career but can’t quite to resist his every invitation. The ending was very rushed and it needed 60 more pages to give decent treatment for all the unfolding plot threads.

That said, this story was refreshing in that the two didn’t declare their love for each other until it really was love. They spent time with each other and the reader got to see the relationship move from attraction to lust to love. Their ultimate declarations of love seemed valid making me believe in the happy ever after. I even appreciated the epilogue which was thankfully baby free. For a sports lover, or anyone who is looking for a fun, sexy, and quick read, this story hits the sweet spot. B

You can purchase this book in print at Amazon or in eform at Fictionwise ($3.83 with Buywise membership and 20% micropay rebate) or Books on Board ($3.51).