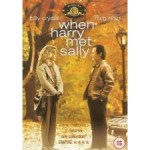 Searching through films for a good New Year’s Eve entry, I came up with two possibilities. Here’s one of them. It’s another movie that, believe it or not, I’d never seen in its entirety. I’d caught bits and pieces over the years when it’s been shown on television but I finally sat down and watched it all and discovered why it’s achieved the status that it has.

Taking the lazy way out, I’m going to credit Greg Bole at IMDB and borrow his succinct plot synopsis: Harry (Billy Crystal) and Sally (Meg Ryan) meet when she gives him a ride to New York after they both graduate from the University of Chicago. The film jumps through their lives as they both search for love, but fail, bumping into each other time and time again. Finally a close friendship blooms between them, and they both like having a friend of the opposite sex. But then they are confronted with the problem: “Can a man and a woman be friends, without sex getting in the way?”

There are several reasons why this movie worked for me. It’s intelligent and doesn’t rely on silly setups or outlandish plot devices to carry it along. Two people meet, have discussions about life, sex and how differently men and women view relationships and the opposite gender. Over time, they become friends then lovers then romantic partners. No wackiness needed. The discussions are fun to listen to and, without taking sides, show that men and women do view the world in different ways yet can still find common ground. More than once, I found myself nodding at something Sally says – it made perfect sense to me too – even as Harry looks at her in disbelief. Then he’d tell her how he went to bed with a date with whom he had almost nothing in common and I’d shake my head just as Sally did.

But it’s also funny. The scene of Harry and his friend Jess (Bruno Kirby) discussing the breakup of Harry’s marriage (“Mr. Zero knew first?!”) while at a Jets game as they periodically have to participate in “The Wave” is a scream. Then there are all Sally’s “food ordering” scenes and, of course, the “faking an orgasm” display which stops all action in the deli, cold. I also love the split screen phone conversation scenes too. The dialogue might be making a point and bringing up serious issues but it’s still done with humor and very little ranting and raving.

The film flows effortlessly and is easy to keep up with despite it’s vignette style. The changing fashions and seasons announce time has advanced allowing us to concentrate on the relationships instead of constantly setting the scene. Watch for Sally’s hair changing from a Farrah Fawcett ‘do’ to styles which don’t require a can of hairspray a day. And despite the fact that it’s over 20 years old now, it doesn’t feel dated as far as the main themes of the movie are concerned. It’s only 96 minutes long, and a lot is packed into those minutes, but I never caught myself clock watching – as Harry famously tells Sally men often do after sex.

The chemistry between Crystal and Ryan is fabulous and the film makers aren’t afraid to let the viewer see them as less than perfect. When Harry meets Sally, it’s easy to see why they quickly part ways and how, when they bump into each other five years later, Sally desperately hopes he won’t be able to remember her. He’s a bit obnoxious and she’s an uptight priss. Five years after that, they’ve both loved and lost and have matured somewhat. Neither is ever totally wrong but neither is totally right either. And they can still be irritating, to us as well as each other.

But what makes the movie for me is how the song “It Had to Be You” could have been written for it. In a lot of rom-coms, when “The End” appears I still sometimes wonder if the bloom will not only come off the rose but if the rose will be tossed in the trash within 5 years. Can the main characters really say they know each other and do I believe it will last? Here, I think they do and that I can. The line from the song, “with all your faults, I love you still” means something.

Good thing Harry isn’t having to plunge through the 2 feet of snow currently clogging NYC sidewalks to tell Sally this. Happy New Year’s everyone. B+