Friday Film Review: The Slipper and the Rose

The Slipper and the Rose (1976)
Genre: Fairy Tale/Musical/Romance
Grade: B 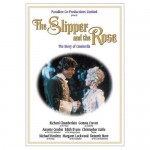 The first time I saw this musical version of Cinderella was a few years ago on the Disney Channel. I thought I’d watch it and laugh at Richard Chamberlain singing but ended up pleasantly surprised by how much I enjoyed the movie. While it’s not musically equal to the Rodgers & Hammerstein songs, it’s visually beautiful, surprisingly funny and overall not bad.

Do I really need to recap the plot? Okay, I’ll steal a synopsis from the IMDB: “In the tiny kingdom of Euphrania, the King (Michael Hordern) and his court (Kenneth More, Lally Bowers, Edith Evans, etc) are most anxious to get Prince Edward (Richard Chamberlain) wed. But Edward wants to marry for love. Meanwhile, young Cinderella (Gemma Craven) finds life drastically altered with her father’s death as she’s forced to be a servant in her own house. But a cheery fairy godmother (Annette Crosbie) helps her with her impossible tasks, and even gets her to take an evening out at the King’s bride-finding ball. But when the magic wears off, and the prince with shoe-in-hand searches for Cinderella and finds her, what is going to happen to Euphrania without the needed marriage alliance to prevent war?”

The music and songs are actually pretty good and were written by the Sherman brothers long known for their many Disney movies including “Mary Poppins,” “The Aristocats,” “Bedknobs and Broomsticks,” and “The Jungle Book.” And while it’s obvious that few of the actors are going to set the musical world on fire, they all do a credible job singing as well as dancing. My favorite number, “Protocoligorically Correct,” is done by the King and his council – watch for the King mistiming his dance steps – while other good songs are “Once I Was Loved,” “Suddenly It Happens,” “He/She Danced with Me,” and “Tell Him Anything.” Misses are a number sung by the Prince and his manservant while dancing in the Royal Mausoleum and one that ends up with the palace servants dancing in the kitchens. Both are just too twee.

Visually the film is a delight. Anif Castle in Salzburg stands in for the Royal Palace with Southwark Cathedral as the scene of the Royal marriage. IMDB states that over 300 costumes were made for the film and if, like me, you adore Georgian period clothing, you have to watch this at least once. It’s a Fragonard painting come to life especially one scene of Cinderella on a flower bedecked swing. Be sure to check out the almost Mardi Gras coach Cinderella arrives at the ball in.

Richard Chamberlain, though getting a touch long in the tooth by this age, looks darn good as the Prince. Gemma Craven is more sweet ‘girl next door’ wholesomeness than dazzling beauty but a good pick for the Prince to fall for at first sight. The film is loaded with several of my favorite actors including Michael Hordern – who gets some of the best lines (he suggests a tax on snobbery to pay for the ball), Edith Evans – who gets the second best lines, Margaret Lockwood – deliciously evil as the stepmother, and Annette Crosbie – as a very tart and overworked Fairy Godmother.

There are a few versions of the DVD out there including full and widescreen, and I’ve heard that the UK version has a good commentary track. Unfortunately, the DVD is OOP though I managed to find a copy fairly cheaply and easily off ebay. But if you’d rather not spring for one, some kind soul has uploaded it to youtube. Check it out for yet another version of the timeless fairy tale. B