The Mummy (1999)
Genre: Action/Horror/Romance
Grade: B 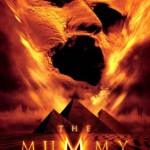 Fun, fun, fun. This movie is just so much fun. As the writer/director and editor state in their commentary (which I advise people to watch once they’ve seen the movie once or twice), they go for shameless gags, laughs and gasps but it all works and we end up with a great way to spend 2 hours.

Ancient Egypt: Pharaoh’s mistress and chief priest are messing around and get caught. Oops. Anck Su Namun (Patricia Velasquez) is killed but Imhotep (Arnold Vosloo) vows to bring her back from the dead. Only he gets entombed alive with some nasty scarab beetles and all are lost to the sands of time for, oh, about 3000 years.

1923 Hamunaptra and the French Foreign Legion is having a showdown with Tuareg warriors at, you guessed it, the same place everybody got buried alive. Rick O’Connell (Brendan Fraser) survives, although his weasely friend Beni (Kevin J. O’Connor) skedaddles, and discovers that there’s something strange going on here.

Cut to Cairo where Evie (Rachel Weisz), an Egyptology scholar, and her brother Jonathan (John Hannah) realize that the key Jonathan got off of Rick contains a map to the ancient city of the dead. Needing Rick to show them where the city actually is (though why, since they’ve got a map? I don’t know), they get him out of his necktie party at the local prison and all head off up the Nile where they run into a band of Americans lead by Beni who are also looking for the fabled treasure to be found.

Once they all arrive, everyone starts digging, hunting and searching. Too bad they find what they’re after. And then some. Imhotep is brought back to juicy “life” by an incantation Evie reads and from that point on, all hell breaks loose.

Writer/director Stephen Sommers does a great job balancing humor with horror throughout the movie. The special effects shots are used lavishly but well, never overpowering the actors and leading to some cool sequences. I find myself enjoying watching the film because, well for one thing it’s good, and for another the people involved all look like they’re having so much fun. It definitely doesn’t come across as “yeah, well I needed the paycheck.”

Brendan Fraser is a great action hero – watch the scenes where he’s fighting the soldier mummies and priest mummies at Hamunaptra and then realize that he’s doing this choreographed fight sequence all by himself since the mummies are all ILM. He’s funny, he’s dashing, he can handle two guns at once then swing a sword and he’s always there to save the day. Rachel Weisz is cute as a bug’s ear and even though she’s the one who accidentally lets loose the 7 plagues of Egypt, she’s just as determined to wrap them back up again.

John Hannah, who’s been a favorite actor of mine for years, is hilarious as Evie’s caddish and lazy brother who still manages to help defeat the soldier mummies just in the nick of time. Arnold Vosloo, once he gets slightly less juicy – you’ll see what I mean – is actually fairly hot as Imhotep – the Mummy. While Kevin O’Connor is a scream with his John Waters-esque “chick magnet mustache” and his “me first” attitude. And of course I have to give a shout out to Oded Fehr as Ardeth Bay, the leader of the secret society that’s watched over the Mummy for 3000 years (yeah, right). He can throw me over his saddle anytime.

Adventure! Romance! Plagues! Mummies! The movie is what it is, a mummy movie, but it’s done amazingly well and with style and panache. On the fourth time through, start watching the GCI and ILM mummy shots because the people behind them had fun with them as well as doing them well. Listen to the commentaries – which are just like I like them, amusing, pertinent and informative – to catch all the mistakes and behind the scenes stories. But most of all, just sit back and enjoy it.