“Whenever I get gloomy with the state of the world, I think about the arrivals gate at Heathrow Airport. General opinion’s starting to make out that we live in a world of hatred and greed, but I don’t see that. It seems to me that love is everywhere. Often, it’s not particularly dignified or newsworthy, but it’s always there – fathers and sons, mothers and daughters, husbands and wives, boyfriends, girlfriends, old friends. When the planes hit the Twin Towers, as far as I know, none of the phone calls from the people on board were messages of hate or revenge – they were all messages of love. If you look for it, I’ve got a sneaking suspicion… love actually is all around.” 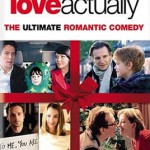 Here’s a movie I hadn’t watched in years and was actually a bit afraid to revisit for fear it wouldn’t hold up to my fading memories. Not to worry. It’s just as good the second and now third time around. The world loves a love story and this is a whole movie full of them. Most happy but some, er, less happy to go along with them. It’s a wonderfully intersecting series of subplots which we often aren’t given all the information about until much later in the film. Which I personally like but which also makes you pay attention to catch all the details.

It’s full of fantastic actors who are all totally believable in their roles, something which in the past had sometimes been a problem for me, especially with the old style 1960s/1970s blockbusters that Hollywood used to crank out. But here they’re all marvelous. With so many to choose from it’s hard to pick favorites but Emma Thompson, Rowan Atkinson, Laura Linney, Liam Neeson and Bill Nighy are all outstanding. Watch Emma fight back the realization of her failing marriage as Joni Mitchell sings of love from both sides now. See Laura’s heart break when she faces the fact that her family obligations will keep her from the man she loves. Laugh out loud as Rowan wraps and wraps and wraps a Christmas present in Selfridges. Marvel at the delicate relationship between Liam and his stepson as they tackle the intricacies of first love. And Nighy rules with his portrayal of an ex-heroin addict ‘has been’ rock star shamelessly out for a comeback who will say anything during his promotional appearances.

The opening and closing sequences are gold as well. Mostly just ordinary people, happily meeting loved and dear ones after jumping through the modern hoops required to fly these days. And the music is fantastic as are the sea creature costumes worn by the school children in the nativity play. What? You didn’t know there were lobsters, an octopus and a whale at the birth of Jesus? Bill Nighy is given some amazing suits which are almost as funny as the foreign language class scene of Firth trying to learn Portuguese. A question: Is Wandsworth really dodgy? It looked okay to me. And can anyone tell me if the Portuguese proposal is really as butchered as the subtitles make it out to be? I will admit to also smiling through a tear or two at this grand romantic gesture.

But what really makes the movie for me is that not all of the romances work out. Sounds odd, I know but if everyone had ended up with a HEA it would have been too sappy for me to stomach. Life isn’t always fair is it but when it does work out, it’s all the sweeter. So what are your favorite actors, scenes or plot threads? B+