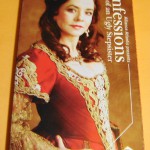 I want to go ahead and review this made-for-TV movie for one main reason and that is that it’s only available online two ways. One is to try and purchase a VHS tape made for promoting the film for (I think) the Emmys eight years ago. These are few and far between and you will pay a premium for them. Or, and here’s the way I’d advise, go to youtube where someone has posted it in 9 segments. Then, if you like it, download the videos to your computer so you can watch it anytime. I use RealPlayer when doing this. But if you do this, do it quickly since youtube can yank stuff down in a heartbeat.

In 1637, Margarethe Fisher (Stockard Channing) and her two daughters Iris (Azura Skye) and Ruth (Emma Poole) flee England in the dark of night to avoid angry villagers with pitchforks and torches. Margarethe, a Dutch woman by birth, is skilled with herbs and, of course, that means that eventually she’ll be accused of witchcraft. They escape to Haarlem and find shelter as domestics in the house of a painter, Master Schoenmacker, (Jonathan Pryce) whose young assistant Caspar (Matthew Goode) and Iris soon strike up something perhaps more than mere friendship.

Through circumstance and good luck, Iris catches the eye of a wealthy Dutch merchant Heer Van Der Meer (David Westhead) to whom Schoenmacker delivers a portrait of Iris in order to audition for a commission. Van Der Meer hires Iris as a tutor and friend for his reclusive, beautiful daughter Clara (Jenna Harrison) and Iris insists on bringing her family with her. Margarethe uses the chance to snare the widowed merchant into marriage and things finally start to look up for the family.

That is until a shipment of tulips upon which Van Der Meer has staked his entire fortune arrives just in time for the collapse in tulip mania leaving the family destitute. Now their only chance to avoid their creditors and eviction onto the streets is the hope that one of the girls can snag the attention of the Prince (Mark Dexter) for whom his godmother, the
Dowager Queen Maria de Medici (Helen Lindsay) is hosting a ball. Can the stepsisters work together to save the family and perhaps to find love?

This is a made for TV movie adapted from Gregory Maguire’s book of the same name. I haven’t read the book but from comments and reviews I’ve read I understand that there were significant changes made to the script and plot. And even I could tell that there were probably things left out due to time constraints, some of which leave gaping plot holes. Yet for all that, it’s a refreshing twist on the tale told mainly from the point of view of the stepfamily instead of the usual saintly Cinderella.

Filmed in Luxemberg, it has surprisingly well done sets and scenery for a TV production. The crowd scenes can be a touch thin and the tight camera shots reduce the amount of extras needed even more but the look is still like something from a Dutch painting. And the costumes – oh my – they’re lovely. Now the men’s hair extensions are a bit laughable but if that’s the price to pay for the gorgeous gowns, I’ll pony up for it. Another nice touch to watch for are the opening and closing credits as well as the points which would have been breaks for commercials. Don’t think that the image has been damaged – it’s supposed to look cracked – just as a 17th century oil painting looks to us today. It’s also obvious that these same paintings probably served as the inspiration for the above mentioned sets, costumes and hair styles.

The film does a good job showing the Cinderella story from the other side. Stockard Channing does a superb job as an unsentimental woman trying to survive and provide for her daughters in this age when women had few options. She’s a strong woman who does what needs to be done, has an eye for an opportunity and seizes it when it comes along. Sure she’s hard on Clara but she doesn’t spare her own daughters either. And frankly, somewhat indulged Clara has a bit of it coming, IMO.

Iris isn’t made perfect either but neither is she deliberately cruel or spiteful. She’s been told by her harried mother that she’s not pretty and Margarethe does have a tendency to lash out at her daughters when things go bad. So when Iris comes to live with the beautiful Clara who’s always had everything handed to her, jealousy rears its ugly head for a while. And Iris usually has a reason for the things she does which in less flattering lights could reflect badly on her. While Azura Skye isn’t a raving beauty, she’s perhaps a bit too lovely for the title of Ugly Stepsister, though.

Clara is short changed in the movie. There are obviously depths to her character and background elements which have been sacrificed for time, so she comes off as even shallower than the book probably portrayed her. But in time she, Iris and Ruth do find common ground and bond together to save each other and the family. And it’s then that Clara finally becomes a beautiful person instead of just a beautiful face.

The movie ends with two romances. All along we see Caspar and Iris falling for each other – which serves as a reason for Clara to finally agree to attend the ball in order for them to have a chance for marriage. And since the basic plot of the fairy tale calls for Cinderella and the Prince to end up together, we get that too. But I found their “love at first sight for another handsome person” romance a pale imitation of the obvious true regard Caspar and Iris have established. This aspect of the film goes back to what I understand is Maguire’s central theme – e.g. is great beauty a blessing or a curse?

I enjoyed watching this slant on the Cinderella story but I think fans of the book might want to approach it with caution. For most of the film, it lives in the world of realism and takes pains to ground the events of the tale. Believable events lead to understandable actions. Well, that is up until Clara’s preparation for the ball when suddenly we get an info dump of information given by a woman who is supposed to be the Fairy Godmother who then whips out some magic shoes. It’s a disappointing cop out which I didn’t see the need for. But I love the 17th century Dutch setting, the inclusion of the world of painters and the use of the real tulip hysteria that gripped the nation. It’s also nice to see the stepsisters as sympathetic and the stepmother as a person just trying to save her family. Check it out for free and tell me what you think of it.