You left kind comments despite my complaining letter and I asked you for a recommendation. You gave me one and I chose to read that one and another. It was a risk on both our parts. Your risk was that I would read the book and write another complaint filled letter. My risk was my time and money. How did we fare? Read on. 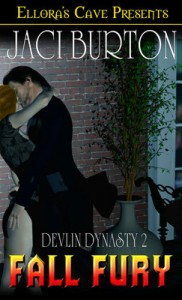 Fall Fury is a story of Max Devlin, werewolf, and Shannon Storm, weather affector. Max is instructed by his parents to move to the South, seek out any werewolves, and take over control of the pack. This is part of the Devlin plan to take over the North American packs (and I guess the world). I thought this was a rather unique aspect. Usually romance authors are so circumspect about world domination, tending to shy away from that but I thought it was kind of fun.

Upon seeing a picture of Shannon Storm, PR rep for The Rising Storm, the Storm family hotel chain, Max decides that New Orleans will be his home base. There is something in the picture that speaks to Max and he is convinced that she may be his destiny. Shannon is not so sure. She tells herself that Max is good for sex but not for commitment. As for Max, he believes that Shannon is his mate but never considered that love would be part of the equation. The Storms want to go national and have hired Max to assist them in the proper launch of the chain. (world domination is important to these families. LOL). I liked the fact Shannon had the willpower to resist falling in bed with Max at every turn. I liked the idea that Max, a werewolf, could smell Shannon’s desire despite her protestations to the contrary. I think that is kind of sexy. I was squicked out by the idea that Shannon could carry “pups” as Max envisions it at every turn.

There is a story here that I wanted to read and the sex scenes were hot without being outre. The problem is the length of the story. It is too short to contain all the necessary information. For example, what is the world construct? Where does the Storm power come from? How does it manifest? How about the Devlins. Where do they come from? How old are they? Are they engaged in a war with other packs? How is Shannon’s mother able to guess at Max’s power when no one else in the family can? I guess I was disappointed by the lack of worldbuilding and it kept detracting me from the story.

I think if the book was longer and time was spent fleshing out these details, I would have been enthralled. As it was, I enjoyed the story but felt that much was lacking. 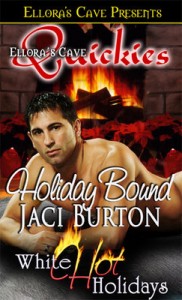 Now, I did read one other book of yours. When I read the descriptions at your website, Holiday Bound caught my attention and I picked that one up. Holiday Bound was great fun erotica tale. I thought the dialogue between the heroine and her best friend was very fun. I love the theme of two unrequited lovers getting together. It is one of my favorite plots in a romance book. The only jarring note was the hero’s favorite phrase: “That’s f-ing hot”. Too Paris Hilton for me but I suppose it isn’t your fault that a pampered B list celebrity has taken a phrase and rendered it unusable for the rest of the literate world.

Probably the best part of HOliday Bound was the character growth for the heroine. Maria had a problem with her sexual desires because as a domestic violence councilor, she had seen deviant sexual behavior used without consent between individuals. Her job brought her into contact with individuals who were really damaged as a result of more exotic sexual games. She felt ashamed of her own desires. Colin’s job was to get her to understand that her desires were not abnormal or deviant when performed between two consenting adults. Remember how I blogged that short stories were very hard to do because of the page limitation. Holiday Bound had a complete story bound up in the 50 some pages. It contained all I liked about your writing – your real people with character development, your sense of fun, and your ability to write hot sex scenes. B for Holiday Bound. I would definitely read more of these types of stories.
Best regards,