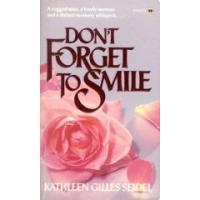 I've been slowly going through your backlist and have enjoyed most of what I've read so far. Your books aren't flashy, but down to earth. They take their time to get where they are going. There is however, a welcome realness to the characters, surroundings, and events. At no point do I ever have to suspend my disbelief in some unlikely plot twist that comes out of nowhere or roll my eyes because a character's behavior is not in keeping with his or her personality or profession.

There are times when I find myself thinking that since the pace is sedate and there are no werewolves, serial killers or dukes, I should be bored, but in fact I'm rarely less than wholly absorbed in your stories. The writing isn't gorgeous, the words don't melt on the tongue or gurgle pleasingly in my ears, but somehow I am quietly seduced, perhaps by the wealth of detail, perhaps by the conversational tone, or possibly by the fact that there is usually something going on with your characters that goes beneath the surface.

All of this is true of Don't Forget to Smile. Published in 1986, the book is now out of print but worth looking for. The story takes place in Sullivan City, an Oregon logging town where Tory Duncan owns and runs a bar. Tory purchased her bar after her divorce from her ex-husband. Tory is something of an outsider to Sullivan City when her bar is held up by two inept teenagers. During the robbery, a customer distinguishes himself in making sure that nobody gets hurt. Tory learns that he is Joe Brigham.

Joe comes from a big, warm family. After working for the sawmill company, he has recently taken over the job of financial secretary of the union's local branch. Soon after the robbery, Joe begins to meet with union members at Tory's bar because they find it easier to approach him there, and Tory sees a lot of him.

Joe and Tory get to know each other slowly. Tory learns that like her, Joe is divorced, but unlike her, he has a six year old son. Joe is having a hard time getting over his wife's leaving and getting used to seeing less of his son. Though he doesn't entirely admit to himself, Joe is brighter and more ambitious than most other members of his family or for that matter, many of the loggers, and Tory realizes that he is different before Joe himself does.

One day Joe mentions that his younger sister Lisa is competing in the local beauty pageant, and Tory says she wouldn't be caught dead at one. She later regrets the comment, which has to do with her past, and, in order to face her demons, she goes to the pageant. Since her car won't start, Joe gives her a ride there, and they sit together. That's when Joe learns that Tory was once the second runner up in the Miss America Pageant. It was her mother's goal for Tory that she become Miss America when Tory was only three years old, and Tory was competing in pageants even before that age.

Joe and Tory gradually become friends. Tory encourages Joe to think beyond the confines of his working class upbringing and plan for a future. Despite a mutual attraction, they don't jump into bed together, or even think of the other as anything more than a friend at first. But one Christmas, when they are both alone and lonely they become physically intimate, too.

Joe wants to bring Tory to meet his family, but although Tory continues to sleep with Joe, she refuses. She can hardly comprehend such a large family, since she was the only child of a single mother, and she fears a more personal relationship than what she already has with Joe because both her relationship with her mother and her marriage failed badly. Joe wants Tory to meet his son, and there too, she is afraid. What does she know about kids?

And then there is Lisa, who comes to Tory asking for help in preparing for the Miss Oregon Pageant. Tory knows from personal experience that pageants can destroy a young woman's self-esteem, but Lisa needs the scholarship money to go to college. Will Tory be able to bring herself to help Lisa, and if she does so, will the demons of her past come back to haunt her?

Like your other books, Don't Forget to Smile was thoroughly engrossing. I started the book intending to read for an hour and didn't put it down until several hours later. I loved the way you made Joe and Tory so real and so interesting to me. Even though their backgrounds are different from my own, I could relate to their conflicted feelings about the choices they were facing. And although they were a bartender and a union employee, I didn't find reading about them any less exciting than reading about spies, vampires, and earls.

I liked the way you took the time to have Joe and Tory get to know each other before they became sexually involved, and despite the fact that there was only one brief love scene in the book, I almost didn't miss the sex. I also appreciated very much that characters like Joe's ex-wife and Tory's mother weren't villainesses, just human beings who made mistakes as most people do. I find it's often much more interesting to me to read books in which there aren't any real villains, because those characters who err and hurt their loved ones feel so much more real and complex.

A few things did mar the book just slightly. I sometimes felt that I was getting too much in the way of explanations. A good example is the opening. Three pages are spent on describing Sullivan City, Tory, Tory's bar and Tory's employees, without the characters interacting or anything much happening. I was patient with this because I'd read your other books and enjoyed them, but if I hadn't, I might have been tempted to put the book down.

Another problem is that Tory and Joe spend much of the last third of the book apart, and the focus shifts to Tory's relationship with her mother. While I understood that Tory had her own issues and had to resolve them in order to find happiness with Joe, I still wanted more interaction between the Joe and Tory.

Despite these quibbles, I deeply enjoyed the book, and overall I quite liked the fact that although it was a romance, it was about more than just the romance. Don't Forget to Smile is also about families, the ways they push us forward and the ways they hold us back, the ways we make our own families and give back to the families we are born to. I liked it very much. B+.