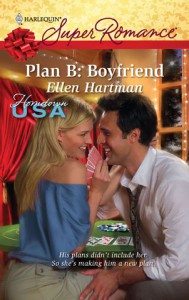 Sarah Finley’s husband left her to marry his boss. Her children have been tossed out of elementary school for a violation of the weapons code. Her friends and neighbors are avoiding her like the plague. Clearly, Sarah is in need of a Plan B.

Enter Charlie McNulty. Charlie is a buttoned down investment banker, focused on his road to a partnership. He’s also a ton of fun on the dance floor and in the bed. Sarah thinks he just might be the perfect second chance man. If only he weren’t working for her ex!

Jane: How would you have rated this one compared to the first book?
Jayne: I liked it a bit better. I didn’t have to get over the heroine not being sorry for the spot she put the hero in with the rest of the town. I did have to deal with Sarah ever having married Erik the Prick.

Jane: I loved the opening scene where Sarah goes to her husband’s office and starts throwing things around.
Jayne: Yeah, I loved that. She’s never thrown a hissy fit before but when she does…she really does.
Jane: I thought Hartman did a good job of showing Sarah as someone who wanted to settle down and she was willing to accept “leftovers” so to speak. I do think that Sarah loved Erik. She kept taking him back, even after he would break up with him. She really had no backbone initially but then isn’t that what her story arc was about – reclaiming herself, not willing to settle. I suppose the question is why was she so wimpy in the first place.

Jane: Was it realistic that her divorce and subsequent problems with her children would have been the impetus for her radical change?
Jayne: I guess she was in a rut, accepting that this was the best that her marriage would ever be but willing to put up with it for the children. I guess as a kick in the pants…a divorce and having her husband remarry on the same day would do it.
Jane: Plus the humiliation of everyone talking about Erik’s affair on top of her efforts to make everything so perfect for him. Or at least, perfect for her children.

Jane: I thought Hartman did a great job of playing up the consequences for the family’s one bad day. The families are shunning her kids and her. Everyone looks a little differently at them.
Jayne: Everyone was willing to gossip about her and her actions and those of the children but almost no one stuck up for her.

Jayne: It did bother me that it doesn’t seem like she’s got any true friends beyond Hailey.
Jane: This is true. Given how much she volunteered and was involved in her kid’s events, you would have thought she would have had one or two friends within that school system.
Jayne: Somebody to be on her side…Instead it’s all, “can you make the strawberry shortcakes even though we don’t want you there to serve them.”
Jane: I know! I can’t even imagine the chutzpah of someone to do that. Egads. I guess that was Charlie’s role, making her isolated was a way of allowing him to play the white knight.
Jayne: Or forcing him to be the white knight.

Jane: True. Did you find his character arc believable?
Jayne: Hmmmm…It seemed a bit sudden but this is a romance with a page limit.
Jane: I thought she did a good job of showing v. telling. LIke the one scene in which Charlie feels uncomfortable at his brother’s house, as if his brother’s family could no longer sustain whatever emotional need it had been filling in the past.

Jayne: What about the whole “Vegas” thing? People seem to have some really hawt sex in that carriage house.
Jane: There must be some aphrodisiac in the carriage house. I thought the Vegas thing was a little screwy, honestly, but I liked how it played out.
Jayne: The poker game was great. Each cheating but the other knowing and abetting it.

Jayne: As a mother, how do you like Sarah’s interactions with her children? Would you stand for Erik’s forgetting his weekends and letting his obligations to his children slide?
Jane: I think that there isn’t much you can do about it. I’ve had several friends go through divorce and sometimes the dads stay involved but often they don’t. Even when they remarry and have new families. I thought Erik was a terrible, terrible asshole and I didn’t think he was very three dimensiional. But, I do know of people who do this.

Jayne: So, it’s better not to force anything?
Jane: Yeah, I’m of the opinion that a bad parent is worse than no parent at all. And Charlie was committed to being there those kids. Maybe that is very fairytail-ish

Jayne: This is the second book in a row in which a father has fallen down on the job. First Olivia’s real father and now Lily and Simon’s father. Is Hartman saying anything about fathers today?
Jane: Isn’t the father in the first Hartman book you read a good dad?
Jayne: Or just setting up the McNulty Bros as good guys?
Jayne: Yeah, he was a good egg.
Jane: I did think that Erik would have been more involved in his daughter’s life since she was more close to him in terms of personality and likes/dislikes. So to some extent, I felt that Hartman overreached. We already knew that Erik was a bastard and he could have easily been a more realistic bastard by choosing to spend time with Lily instead of Simon.

Jayne: I do love Simon and Lily.
Jayne: They seemed to be real children with real life problems. I love Charlie’s interactions with Simon and Lily. He doesn’t push or force his way into their lives but gives each what they need. He also seems like he’s the perfect guy to take up Erik’s position as Lily’s sports supporter.
Jane: Yep. I liked how Lily’s competitiveness wasn’t debased to make Simon a more attractive child and vice versa. They were very different and Sarah’s challenge was to love and accept them equally.
Jayne: And maybe help Simon fit in a bit better sports wise. But I agree that we won’t try to force Simon into something he doesn’t want to do.
Jane: The baseball scene was awesome. It’s definitely one of my favorites in the book.
Jayne: I can just see Lily with her catcher’s mask on. “Squash them like grapes!”

Jane: Hartman does a very good job at selling you on the realism of the setting. I think she’s a very thoughtful author.
Jayne: That was a great bonding moment between mother and daughter – when Sarah finally realized what Lily wanted to hear.

Jayne: JT, Hailey and Olivia are here again but in subdued roles that fit their place as secondary characters. I didn’t feel that they were taking over this book to show how happy they are.

Jayne: I loved the Drunken Breakdown.
Jane: Yes, the Drunken Breakdown was awesome with both Charlie and JT getting into the spririt of things.
Jayne: Yeah, they still have their teasing relationship and moments when women’s speak is baffling to them both.
Jane: Hartman does great guy characters. The brother’s interaction was priceless.
Jayne: I guess this was really the beginning of Charlie’s change in character. Him being willing to endure what could have turned into more tears and emotional stuff. The kind of thing he was raised on and didn’t want to deal with again. So when Sarah begins her remodling of her kitchen, which I guess is really the continuation of her remodeling her life, he can deal with the fact that she’s got a crowbar in her hand. And not get too worried about it.

Jane: So his transformation is more at the end and Sarah’s is more at the beginning?
Jayne: No, I think they finally reach the same point at about the same time. They just have to travel by different routes. She has to learn to let loose and he has to learn to let her let loose. Charlie was always trying to avoid the type of emotional confrontations and environment in which he was raised but he learns that emotions aren’t bad things and that he can survive them and a messy life.
Jane: And that chaos in his life doesn’t mean instability, at least emotional instability
Jayne: Sarah’s always done what she thought everyone else wanted her to do but now she’s finally doing what she wants to do. The final scene with Erik, Lauren, Charlie and Sarah in the kitchen was a bit OTT but all the same, very satisfying.
Jane: Hartman got in very subtle and not so subtle digs all around.

Jane: What grade would you give it? Where would it rank in your Hartman books?
Jayne: I would give it a B and rank it in the middle of the three Hartman books I’ve read.
Jane: I would probably give it a B or B+ too. I haven’t read* His Secret Past and would rank this book above Wanted Man and The Boyfriend’s Back.

*Since our conversation, I have read His Secret Past and that is definitely my favorite Hartman.

→ Jane
Previous article: My Experience with Reading Digital Books on the New Droid Phone by Gwen Hayes
Next Post: Poll: Movies and Books