Comic Review: Twelve Reasons Why I Love Her 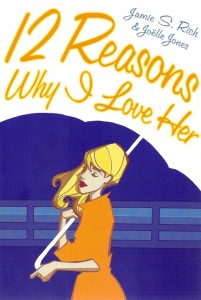 A passing mention of Twelve Reasons Why I Love Her during a conversation about graphic novels caught attention of the romance reader in me, which prompted me to ask the friend what it was about.

He described it as "a Memento-like story of an average guy’s life with his new girlfriend. It’s all right, I suppose."

His girlfriend pointed out, "You cried and hugged me, didn’t you?" The friend blushed and pretended he didn’t hear her recollection. I cautiously asked, "What, the romantic interest died?"

The girlfriend flashed a grin and answered, "Unlike a certain classic novel, no one threw themselves in front of a train. Don’t worry, it has the, what do you call it again? H.E.A.? You’ll love it."

Unfortunately, although it was published in 2006, Twelve Reasons Why I Love Her is already out of stock. But I decided to review this graphic novel because I was able to score a copy at a small London comic shop. If I could get it, then it should be reasonably easy to get a copy from elsewhere or a library.

Twelve Reasons Why I Love Her is not told in usual chronological order. It’s not even a typical story. It’s broken into twelve vignettes – each has a song listed under a chapter heading – to chart each crucial turning point in the story of Evan and Gwen, two twentysomething New Yorkers, from their first meeting to the present. 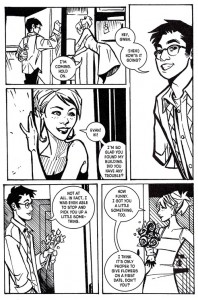 Evan is a reasonably easy-going bloke with a tendency to put a foot in his mouth and has somewhat streaks of jealousy and hot temper that oft lands him in Gwen’s bad books. He can be emotionally immature sometimes, but he’s self-aware enough to recognise his flaw. He’s clever enough to be a quick learner when come to making a relationship work by knowing when and how to grovel well.

Gwen is a self-assured and fiercely loyal woman who doesn’t shy from speaking her mind or getting what she wants, but while she is happy to enter a relationship, she has underlying emotional issues that she quietly struggles to resolve. At least she does try to be upfront and honest, the best way she knows how to, without losing a sense of what’s right and wrong (which is highlighted in an adorable vignette). 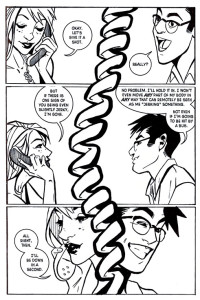 With their ongoing attempt to settle into their new relationship, will an emotional leftover from Gwen’s past tear them part?

Twelve Reasons Why I Love Her is a simple but adorably honest look, through Evan’s eyes, at a relationship that’s filled with poignant moments, occasionally quirky conversations and little conflicts that many might recognise. It’s almost a love letter from Evan to Gwen to explain why, as the title implies, he loves her.

Evan and Gwen are likeable, but I’d like to share what I learnt. I had mixed feelings about Gwen’s seemingly smug personality, supported by a series of her smirks. I lent the book to my husband to see how he may see Gwen. He found her rather sexy and witty, especially when she was brimmed with quiet confidence. I realised then that I had (mis)interpreted her confidence; a trait I’m used not to seeing in a romantic heroine, especially not in romance novels. It’s both an embarrassment and a mortifying revelation on my part. I think it’s because writer Jamie S. Rich chose to highlight – through Evan’s eyes – the best side of Gwen, even when she was at her worst.

Evan, on the other hand, didn’t get that kind of protection from Jamie S. Rich as we got to see his immature moment or two. It’s actually quite interesting to see how the couple are viewed through Rich’s eyes. It made me wonder if that was how my husband saw me. I asked, of course, considering me being such an inquisitive creature. His answer was quite interesting, similar to Evan’s perspective. Oh, I liked this book for that alone.

The darkest vignette was, I felt, clumsily handled, but when I re-read the book, it worked. However, I still think it needed another vignette to give the Freddie issue some kind of closure. I suppose it may be intended that way, so that we the readers would try to imagine what might have happened – if we were to re-arrange all vignettes in chronological order – in a period between this vignette and the final vignette. Even so, I still would like another vignette. My all-time favourite is, to my surprise, the final vignette.

Since this review is primarily for romance readers, Twelve Reasons Why I Love Her does have the HEA.

Illustrator Joelle Jones’s art is very easy on the eye. The strong black line art is elegant with a strong streak of the 1960s. Almost in Audrey Hepburn style and yet contemporary enough to fit in with today’s world, which makes it rather timeless.

If I were to highlight a selection of romantic comics/graphic novels for romance readers, Twelve Reasons Why I Love Her would be in the selection. I’m still sorry that it’s currently out of stock. Perhaps one day Oni Press will have a mind to do another print run for this rather adorable story.

Twelve Reasons Why I Love Her gets a solid B+ from me, now a devoted follower of author Jamie S. Rich and illustrator Joelle’s works. I managed to get my paws on Jamie S. Rich’s prose novel The Everlasting and illustrated novel, Cut My Hair. I look forward to reading those.