I have read all the books in your The Secrets of Hadley Green series. (OK, I didn’t read the Christmas novella.) I seem to enjoy every other one. The first, The Year of Living Scandalously, failed to grab my attention. I liked the second, The Revenge of Lord Eberlin (my review is here) and actively disliked the third, The Seduction of Lady X. This one, The Last Debutante, is a lighter read than the two that preceded it. I enjoyed it despite the fact it’s set in romancelandia Scotland and the hero speaks romancelandia Scottish–all “wee” and “donna“–which usually are buzz-kills for me.

Daria Babcock lives with her exceedingly devoted-to-one-another parents in Hadley Green where she is the last one in her set without a studly husband. Daria, who had three unsuccessful seasons in Hadley Green, is somewhat depressed.

She would like to be married, to be a mother, a wife, to have some purpose other than to attend teas. 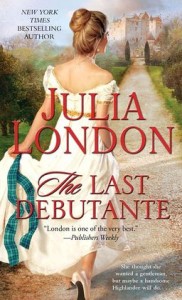 One day, after attending a tea, Daria comes home to find her usually ebullient parents acting subdued. When Daria asks why her mother tells her that her grandmother Mamie is yet again in need of money and that her father must travel to Scotland to give it to her. Daria, bored and lonely, announces that she will go in her father’s place. Her parents say no, then say yes, Daria sails to Scotland with her friend Charity (the sister of Lord Eberlin), and, after Charity pretty much abandons her, Daria finds herself stranded in the “middle of nowhere” in the Highlands. She hikes up a tiny trail to her grandmother’s crofter’s cottage where she finds not her grandmother but an unconscious “completely naked man.”

Daria’s breath deserted her. She stood rooted to the floor, her gaze locked on him, a tremor of fear building in the pit of her belly. He was … a very big man. All of him was big. Daria had seen a little boy without his breeches, but she’d never seen a fully grown man in all his splendor. She’d had no idea that boys turned into this.

The robust specimen in question is Jamie Campbell, the laird of the Dundavie Campbells. Jamie had come to query Mamie whom he has been told beguiled a thousand pounds out of his slightly senile Uncle Hamish. Mamie shot him in the side with her blunderbuss and is now drugging him with valerian.

Daria can’t fathom why her grandmother would have a wounded naked man in her home but when Mamie returns to the cottage and Daria demands an explanation, Mamie’s makes no sense. Mamie claims she found the man, already shot, lying in the woods, and brought him home out of the goodness of her heart.

As soon as Jamie is able, he explains to Daria who he is and how he came to be shot. Mamie doesn’t deny shooting him but she still hasn’t a believable reason for doing so. Jamie is more than a wee bit miffed. He wants Mamie to be punished and to repay his clan’s thousand pounds. Daria promises to do the latter if he will give way on the former. When Jamie’s men arrive to rescue him, Jamie announces that Daria will be returning with him to Dundavie. When an outraged Daria protests, Jamie explains.

“You have made your argument for it yourself, lass. Your desire is that I do no harm to your grandmamma. My desire is that we handle this matter by applying the rules of Highland justice. Plainly put, if your grandmamma wants to see you returned to Enland, she will repay the money she took from Uncle Hamish.”

This silly set-up is just that: a set-up to get Daria placed in the midst of a quirky Scottish village ruled by Jamie. I forgave its silliness because, once Daria is ensconced in Dundavie, surrounded by Jamie’s clan, The Last Debutante becomes a lot of fun.

The best thing in this novel is not the romance (which is fine) nor is it the historically dubious setting. The best thing is the cast of characters living in Dundavie. There’s Jamie’s brother Geordie who, after having his throat slashed in a stupid fight, is now mute and must communicate by writing on a slate. Despite being an atrocious speller, Ian determinedly comments on everything his brother does and is often hilarious. There’s prescient, perpetually cranky Bethia who is assigned act as a maid to Daria and who gloomily predicts Daria’s happy future. There’s Jamie’s cousin and bodyguard Duff who constantly corrects Daria’s English misapprehensions about Scottish life. Daria falls for Jamie’s people who in turn come to see her as far more than the nickname they’ve given her: Ransom.

I like Jamie and Daria individually and as a couple. Daria is smart, independent, and resourceful. When the book begins, she’s a rather spoiled girl determined to become more than what Hadley Green offers her. In the Scottish highlands, far away from the rules of early 1800’s England, she becomes an interesting woman with the brains and insight needed to be the lady of Dundavie. Jamie who at first seems like a stereotypical alpha Laird is really a thoughtful, compassionate caretaker who works hard to protect he people he is responsible for. Each brings out the best in the other. Their relationship is less sexual than in those in the other Hadley Green books and that’s a good thing. Jamie and Daria fall in love through conversation; the passion between them matters but it’s not the thing that draws then binds them together.

I have never liked the plot that snakes through all the Hadley Green books. It involves stolen jewels and an evil vanished earl. In this (I think) final book of the series, that plot is resolved and it’s no more interesting here than it was in the other novels. Mamie’s reasons for needing money and shooting Jamie are a part of it as are, rather horribly, the reason Daria’s parents are so devoted to each other. Everything is explained and the good people of Hadley Green live happily ever after and the bad people don’t. My response to this tidy finish is a big yawn.

Despite its silly premise and plot, The Last Debutante is entertaining. I read it while in Florida where I took my two youngest for their Spring Break. It made a great vacation read: funny, slightly sexy, sweet, and utterly undemanding. I give it a “beach read” B-.