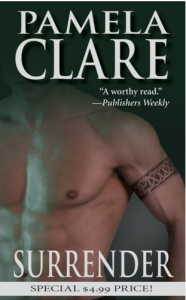 This one is a definite improvement over last year’s Ride the Fire. Yes, by today’s standards, the hero is a bit overbearing but a) he knows when he’s f*cked up and b) most of the time he’s just trying to keep the heroine safe. And the heroine, aside from her lamentable habit of saying, “Mercy” all the time, is well done too. Iain does have to save her some but mainly because she’s totally out of her expertise on the American frontier and not because Annie deliberately gets herself into trouble. Ah, how refreshing! Thank you. And there’s a nice turn on the usual English-nobleman-who-turns-out-to-be-a-bastard character. Again, many thanks.

There is a degree of violence but these were violent times and I’ve read far worse before. I did get tired of the sex scenes which were thick and fast during the second half of the book. There’s lots of purple prose and a seemingly endless supply of orgasms. The first sex scene was especially silly in regards to this. The epilogue is sappy and can easily be skipped. Iain has two brothers and I would image that you have plans for them though I would like to see something done with Lord William Wentworth as well. Oh, and the cover….well it’s lamentable but not truly skanky so enough said.