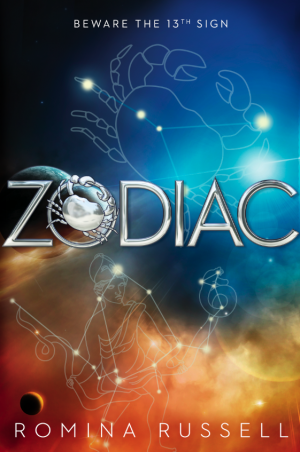 After having a rough couple of months with my reading choices, I was beginning to despair. Why couldn’t I find a book to hold my interest past the first few chapters? Maybe it was just burn out. Maybe I just needed a break. Or maybe I just needed to find a book that was a little different from what’s been hitting my inbox lately.

Then, your debut novel came along. Zodiac fits the bill. A science fiction novel that draws inspiration from astrology? Sign me up. (Here I must confess that astrology is a casual hobby of mine, so I know this won’t be the same draw for everyone.)

Zodiac takes place in a galaxy where each astrological sign forms a House, and each House has its own planet (or planets). Our heroine, Rhoma Grace, hails from House Cancer. At the start of the novel, she’s attending the academy and causing trouble with her unorthodox methods of star divination. But when tragedy strikes her homeworld and kills many people, including House Cancer’s beloved Guardian, Rho finds herself thrust into the heart of the conflict when she is selected to be the House’s new leader.

Rho’s got her work cut out for her. Not only does she bear the responsibility of rebuilding her home and saving her people, she suspects that an ancient enemy of the twelve Houses has returned. As other Houses begin to fall to natural disaster or violence, Rho embarks on a mission to warn the other signs of the danger. But who will believe someone so young and untried, when the enemy is something out of a childhood fable?

Despite my initial enthusiasm for the premise, Zodiac‘s beginnings proved a little rough and slow for me. This is partly due to the worldbuilding. A premise liked this requires a certain amount of front-loaded worldbuilding because of the astrological basis. And because I found it so worldbuilding-heavy initially, I had a hard time getting invested in Rho’s story.

But I soldiered on and was rewarded. This will sound terrible, but once the catastrophe hit House Cancer, the story picked up. I loved watching Rho having to balance her responsibility to her House with the fate of the galaxy. Her struggle to learn how to navigate the politics inherent in being a House Guardian, when her strength lies in her much-maligned divnination skill.

I personally found the plot to be fast-paced and interesting. When you read a lot of books, plots tend to become — if not predictable, then at least somewhat expected. Bad stuff happens to Rho. Bad stuff happens to people around Rho. Things do not go easy for her. People do not believe her, even her own allies. People even actively work against her. I thought the interpersonal conflicts were well-done overall.

I even found the love triangle, of sorts, to be quite bearable, and we all know how I feel about love triangles. Rho has admired the older Mathias from afar for years. He’s now one of her advisors/guards and while this seems like easy sailing, he doesn’t trust in Rho’s abilities and in fact, thinks he should have been chosen as Guardian. Ouch. Then there’s Hysan, a Libran envoy who’s actually something more — and that something more (other than being a spoiler) would mean breaking a huge galaxy taboo should Rho pursue a relationship with him.

Overall, I found this to be a worthwhile read once I made it past the first few chapters. Even though the worldbuilding is heavy in the beginning, I actually found the book to be more reminiscent of fantasy rather than science fiction. If readers are unsure, I’d advise giving it until 50 pages to see if the book hooks your interest. I’m certainly glad I stuck until the end, and am looking forward to the next one. B