REVIEW: You Suck by Christopher Moore

Just ask C. Thomas Flood. Waking up after a fantastic night unlike anything he’s ever experienced, he discovers that his girlfriend, Jody, is a vampire. And surprise! Now he’s one, too. For some couples, the whole biting-and-blood thing would have been a deal breaker. But Tommy and Jody are in love, and they vow to work through their issues.

But word has it that the vampire who initially nibbled on Jody wasn’t supposed to be recruiting. Even worse, Tommy’s erstwhile turkey-bowling pals are out to get him, at the urging of a blue-dyed Las Vegas call girl named (duh) Blue.

And that really sucks. 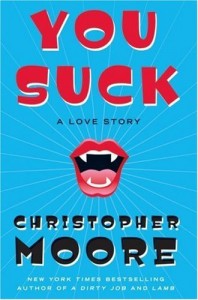 I’m really glad I remembered so much about “Bloodsucking Fiends” because you just jump right into this story and woe to anyone who can’t keep up. The few hints and regroups and reminders scattered throughout the story do help but I doubt that anyone who hasn’t read book one in this series would be able to keep up with the pace.

It’s good to see Jody and C. Thomas “Tommy” Flood plus all the Animals, Cavuto and Rivera and, occasionally, Elijah again. Then there’s the all new Blue – the smurf hooker. My new favorites are Abby/Allison, who takes over as chief minion now that Tommy’s been turned, and her got-to-wait-til-almost-the-end-to-see-him-again sweet love-ninja boyfriend “Foo Dog” Steve. Steve and his awesomely cool UV light fighting gear are boss.

The action is fast and furious from the get-go and yet, to some extent, much of it seems like the same from BF. Jody is delighted with her powers, Tommy still wants to know all there is to know about vampires (or vampyres as goth-ishy Abby and her gay pal Jared spell it) only this time since he is one, he really wants to know WTF. Too bad Jody didn’t learn from Elijah all there is to being a foul undead while she could. The Animals are still stoners, playing skid the buzzard and basically useless slaves to the power of Blue’s HIV+ hoo-hah – bet they’ll be glad they were, even if so briefly, changed as well in order to kill that pesky virus. And maybe Drew’s knee is fixed too. Cavuto and Rivera still are behind the times about what’s going on but at least this go round they catch on more quickly that San Francisco is becoming vampire central. Though it looks like they’ll be stuck as coPs (as Abby says it) for a while instead of retired and playing golf.

As to the number of vampires we’re dealing with, Mah God, doesn’t that almost get out of control. And speaking of OoC, I briefly worried that this book would end somewhat as does “Dirty Job” and “BFs” in that category. Everyone’s getting changed, people are racing around trying to catch each other, kill each other and stay out of the sun before the mysterious 3 show up – those who seem to have the Ultimate Vampire power and last word. Now that I know there’s a book three to check out, I wonder if more will be learned about them and why Elijah slinks off with them when they say “Slink Off, 800 year old Dude” (to paraphrase as Abby does in her “annoying at first but later you get used to it” journal).

Don’t get me wrong, I had fun reading this book, loved to see all the former gang back, and whipped through it in 2 days yet so much of it felt like a reread of BF. Which, if I have to read a reread of a book I’ll gladly read it of this one however… I guess it goes to show how hard it is to write what people loved about the first book but more. “Yeah, I want it exactly like the first book but different.” Ah, well, I’m now looking forward to “Bite Me.”