REVIEW: You Really Got Me by Erika Kelly 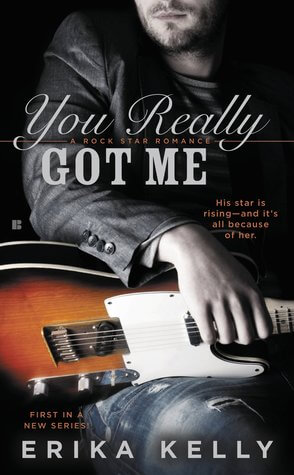 I had forgotten I read this book until the second one came out. As we all know, I’m a big fan of the rock star trope. The hero in You Really Got Me isn’t a rock star…yet. That’s coming. It’s the story of the formation of the band and how it gets its big break.

Emmie Valencia is an assistant to one of the biggest, most important A&R guys in the industry. But she’s tired of being an assistant. When she’s overlooked for yet another promotion, Emmie decides it is time to make her boss notice her and the way to do this is to find a band. She decides to go on the road while her boss is in Europe. If he doesn’t recognize her genius after she finds the next hottest band, she’s going to leave this job.

Her first stop is in Austin, Texas. Emmie’s brother is part of Snatch, a post college band that plays at the local music festivals and bars. While in Austen, she stays at her brother’s place which he shares with Slater Vaughn, the band’s lead singer.

Emmie is smart and capable. She not only whips Snatch into shape and books them into a spot in the hottest Texas summer music festival but she has marketing and promotion ideas that the band hasn’t even tried. We aren’t told how good Emmie is, we’re shown it from the retooling of the Snatch logo–making it ironic instead of perverse–to the way in which she interacts with the music people around her. She’s also fairly confident so that the conflict between her and Slater isn’t about not feeling good enough for him but rather that she’s not interested in getting involved with another musician. She had done that and had the cheating wounds to prove it.

For his part, Slater resists his attraction to Emmie because she’s the sister of his bandmate but once he decides that he’s done resisting for the sake of resisting, his pursuit is unwavering.

The real relationship conflict arises, predictably, from Slater’s interaction with a female musician. If there’s one part of the story that felt stale, it would be this one. The evil other woman plays on Emmie’s past insecurities and tries to drive a wedge between her and Slater. It fits, though, with Emmie’s initial reluctance to become involved with Slater and is likely the one thing that would have insinuated doubt in Emmie’s head. And when there are confrontations, I liked how it was handled. How they talked, how they argued, and how well the issue was explained.

For the most part, Emmie doesn’t suffer a lot of the self doubt that is common amongst other female protagonists in romance books. And when she does have moments of self discovery, they are often independent of Slater. In a humorous scene, Slater and Emmie go shopping for supplies. Emma nips into a lingerie shop and buys a number of frivolous and beautiful things for herself. Her nonchalant discussion of her purchases drives the notion home to Slater that she has no interest in him.

“The realization hit him like a telephone pole. She could talk like this, walk around the house braless, only if she didn’t see him like that, like a guy. He was just a player who banged groupies. She’d never take a guy like him seriously.

It wasn’t just a line she’d used. She actually wasn’t susceptible to him at all.

Holy fuck. Why did that realization drop him to his knees?”

Slater is less of an interesting character than Emmie. He’s hot. He sings. He writes music. He has issues with his past, with his dead father, with his professor mother but I felt that the story was really about Emmie who, in the process of searching for a band, discovers more about herself. What’s interesting is that even though she was confident and capable she totally missed what she was really good at in search of what she thought was greater recognition.

“It’s not fear that holds me back. I’m just being realistic.”

“And are you enjoying this realism? Is it quite fulfilling?”

A smile spread slowly and surely across her entire body, opening her. It was like uncurling a fist after clenching it too long. “It sucks.”

This is a fun rock star romance with an appealing heroine and lots of insider-y looks at managing a band. B