REVIEW: Within Reach by Sarah Mayberry

Years ago I saw a made for TV movie called The Substitute Wife. Set in “Pioneer Times,” it starred Lea Thompson as a woman with four children who knows she’s dying. She’s determined to find someone to replace her and ultimately brings home a hooker with a heart of gold played by rather subdued Farrah Fawcett. That plot appealed to me then and it appeals to me now. I love the idea a wife leaving this world could pick her successor. When I was younger, I gave this some thought. If I died, who would I have picked to marry my husband and raise my kids? I almost always chose one of my very closest friends who were, at the time, conveniently unmarried. Who better to take over my life and keep it safe than someone I loved and knew? When I read the summary for Within Reach–husband is widowed far too young, left with small children, and finds himself falling for his dead wife’s best friend–I had to read it. I liked Within Reach a lot but I struggled with the idea that both the husband, Michael, and the best friend, Angie, were so freaked at their coupling. Their relationship seemed almost predestined and, if you ask me, it’s one Billie, the dead wife, would have approved of whole-heartedly. 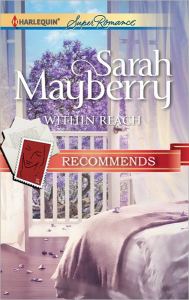 Michael and Billie Young were happy, truly happy, together. Michael, an architect, loved his job, his wife, and their two children Eva and Charlie. Billie stayed at home, enjoying being a full-time mom who dabbled in ceramics. She’d been best friends with Angie since the two met in boarding school. Angie, a jeweler, is, at thirty-two, single. She’s yet to find the guy whom she’d like to settle down and have kids with. She likes kids; in fact, she loves Eva and Charlie and spent, prior to Billie’s death, a fair amount of her free time hanging out with Billie, Eva, and Charlie. One horrible afternoon Billie collapses and dies of a genetic heart defect. Michael–and Angie–are devastated. Michael takes a year off from his job to care for his kids but, ten months after Billie’s death, it’s clear to Angie he’s drowning in grief and bringing the kids down with him. Angie, worried and anxious, confronts him.

For a moment there was so much blazing anger in his eyes that she almost shrank into her seat. She understood his anger—his wife of six years had died suddenly and brutally from an undiagnosed congenital heart defect, leaving him to raise their two children alone. He’d lost his dreams, his future, the shape of his world in the space of half an hour.

But the fact remained that life went on. Michael was alive, and Billie was dead, and there was nothing anyone could do about it. Certainly living in some sort of shadow world wasn’t going to fix things or make them better.

So she stood her ground and eyed him steadily. “I know it’s hard. I think about her every day. I miss her like crazy. But you stopping living isn’t going to bring her back.”

Angie is, of course, right about this. The dead don’t return–at least not in standard contemporary romance–no matter how loved they were. Michael, a rational guy, accepts this. What he can’t accept is that he has a right–even, according to Angie, a responsibility–to live and love again. Michael believes a life lived immune to romantic and sexual intimacy is his dutiful destiny. He’s therefore horrified, after the above confrontation with Angie, to feel his libido come alive. First he dreams about sex with a faceless woman–clearly not Billie. Then, as the he and Angie spend more time in contact, he begins to see her as a desirable woman. This awareness initially makes him miserable. Angie is not only his dead wife’s best friend–she’s the rock on which his recovering family is anchored. She picks up Eva from school, changes Charlie’s diapers, and gently, but firmly, ushers Michael back into the land of the living.

Angie is equally appalled to be attracted to Michael. To her, he’s always been Billie’s and she, Angie, never gave his gorgeous body or his intelligent charm any real thought. But now that Billie’s dead, and Angie’s practically living in Michael’s house–she moves her studio to the pottery nook Billie never got the chance to truly use–Angie finds herself hyper-aware of Michael the man.

She’d acknowledged it a number of times—Michael was good-looking. The strong planes of his face, those clear gray-green eyes, the dark, rumpled hair. And his body. Even in his current lean-and-mean state he was still built on heroic lines. She’d have to be blind not to notice so much male beauty.

But he’d always been tall and dark and handsome and he’d always had the body of a god and it had never bothered her for a second before.

Yes, but he belonged to Billie then.

The realization hit in a cold rush.

She’d never been the sort of woman who coveted other women’s men. It wasn’t part of her makeup. But Billie was dead, and even though Angie would never, ever dream of looking sideways at her best friend’s husband, on some subconscious level she was obviously aware of the fact that Michael was now a free agent.

She shook her head, deeply uncomfortable with the direction of her own thoughts. She didn’t want to be aware of him in that way.

This conflict between desire and denial is beautifully portrayed in Within Reach. Your deft writing makes the grief and guilt Michael and Angie feel palpable; I teared up several times as I read Within Reach. Billie’s death is also so damn sad for her kids–both of whom are wonderfully rendered–that, at times, I had to put the book down and collect myself. I loved the sorrow in this book–it’s the sort that makes one appreciate being alive and able to love.

That said, half-way through the novel, I lost patience with Angie and Michael and their guilt. Neither sees sex with the other as a casual undertaking, both are deeply enmeshed in Eva’s and Charlie’s lives. They, now Billie is gone, seem destined to be together. I felt it would be so much harder for the kids were Michael to fall for anyone other than Angie. It’s clear, were Billie alive, Michael and Angie would have remained nothing more than friends. But, now Billie’s dead, Michael and Angie are strongly drawn to one another. When they finally do make love, it’s spectacular for them both. I wanted them to celebrate their connection–I am sure Billie would have–and was piqued when they ran from it.

The second half of the novel has Angie and Michael inching toward the inevitable–and the process felt unnecessarily drawn-out. You portrayed their angst with skill, but I felt their mea culpas lingered too long. On the other hand, it might just be me. I genuinely didn’t see a relationship between Angie and Michael as something taboo or that would betray Billie. For readers who think there’s never a time one can hook up with your best friend’s husband, the guilt the lovers feel may read as appropriate.

I liked Within Reach–it’s no secret I’m a big fan of your work. The writing, the secondary characters, the setting, the love scenes, and the depth of emotion portrayed are well done. I just wish Angie and Michael had allowed themselves their happy ending sooner than they did. I give the book a B.