It’s safe to say that dystopian and post-apocalyptic books are the new black in YA. We have The Hunger Games to thank for that, in part, and I suspect this is only the beginning of an oncoming wave. Your debut novel, Wither, stands firmly on the dystopian side of the spectrum. It portrays a bleak world that will seem familiar to anyone who’s heard of The Handmaid’s Tale and Children of Men. Because I’m a big fan of dystopian tales who greatly admires both those works, I snapped this novel up. Did it live up to my expectations? Not quite, but it was still a worthwhile read. 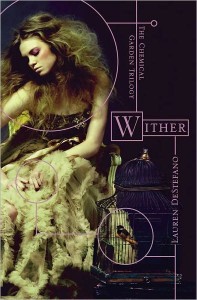 In Wither, genetic engineering led to the creation of perfect children. Cancer has been cured. Allergies eradicated. The human immune system boosted to such levels that disease has been virtually wiped out. Why conceive natural born children when a little scientific tinkering results in perfect little bundles of joy that are strong and never get sick?

The first generation of children created courtesy of this technology were born near-perfect. Unfortunately, no one thought to test the long-term effects of this technology. I cringe at this oversight. Because while the first generation of kids were born without flaws and are now approaching their twilight years, the same could not be said of any generation born thereafter. From the second generation onwards, children are born seemingly healthy and strong — only to implode at the ages of 20 and 25 for females and males, respectively, in a terrible mess of wracking coughs, vomit, and blood.

The world is in a panic. The human race is dying a slow death because its children fall apart just as they reach adulthood. In a desperate attempt to counter this, the rich and privileged kidnap young girls and sell them into polygamous marriages in the hopes that the babies conceived to such unions hold the key to fixing what went wrong. Of course, discovering a cure will require even more genetic experimentation but let’s not quibble about the details.

Sixteen-year-old Rhine barely scrapes together a living with her twin brother in the industrialized remains of New York City. But one day she’s kidnapped off the streets when she answers an ad promising money in exchange for some work. Because when you’ve been living a hard life with your teenaged brother, nailing your basement apartment door shut, fending off would-be robbers with a shotgun, the first thing you’d do is answer an ad looking for young girls without thinking that maybe this might be a little bit suspicious. Along with two other girls, Rhine finds herself bought and shuffled off to a new life as a Governor’s pampered wife.

Rhine faces the reality of their situation very quickly. The Governor’s first wife, his childhood sweetheart, has hit the fatal age of 20 and is dying. Rhine, with her blonde hair and heterochromatic eyes (a novelty in a genetically engineered world), is intended to take her place as first wife. Along with her are Jenna, a quiet girl who despises the world they’ve entered, and Cecily, a thirteen-year-old orphan who couldn’t be more excited to live a life of luxury and be someone’s wife. But she also has to contend with Linden, her new husband who accepts this life and what’s done to them without question, and Vaughn, Linden’s controlling, scientist father. All of which is further complicated by her burgeoning relationship with a house servant named Gabriel.

I have to give props. Of all the things I never expected to see portrayed in YA, polygamy ranks pretty high. Wither doesn’t scrimp on it either. Rhine forms relationships with her sister-wives: first wife, Rose, before she dies; a close bond with Jenna; and even a older sister/little sister dynamic with Cecily. They’re not always friendly and often times they’re strained, but I did like how relationships were portrayed in all their complicated glory.

But it was also the sister-wives’ presence that made aspects of Rhine’s situation completely unbelievable. Of the three of them, she is the only one who does not have sex with Linden. And while I have absolutely no desire to see a poor girl coerced into any sexual situations, even in a setting like this, I found that very hard to swallow. Not only does he sleep with Jenna regularly, the very first of them he chose to have sex with was thirteen-year-old Cecily who is described as still having the body of a child. Even if she was eager to please, the fact that Linden chose her over sixteen-year-old Rhine and seventeen-year-old Jenna does not say good things about him. And because it does not say good things about him, I need more to believe that he wouldn’t try to initiate sex with Rhine more often or that Rhine’s rejections would to take hold with him at least once. It’s not so much that Linden alternates between being gentle in some aspects and monstrous in others; I find that very believable because people are complicated and we have facets to our personalities. It’s just that Rhine not having to have sex with him strikes me more as a function of her being the very special heroine who gets to escape the unsavory aspects of their world and the plot simply because she is the very special heroine and not because of anything she actually does.

Another aspect of the book that could give readers difficulty is the simple fact that from the moment Rhine is dropped into the lap of luxury, her one and only desire is to escape. I personally had no problem with this because unlike the other characters, Rhine still has surviving family (her twin brother) and even though her life up until now has been a hard one, it’s still been relatively sheltered in that she’s never had to sell her body in order to survive like other girls her age have. Her brother is all she’s had for many years and together they struggled to survive from their young teens. That forms a strong bond on top of them being siblings, and I can understand her strong desire to reunite with him. Still, I think it is a valid point and some readers may find it difficult to empathize with Rhine and her struggles. If you have only 4 years left to live, why not enjoy the food, pretty dresses and glitzy parties? We all react to our own mortality in different ways, and that will be reflected in how readers will receive this part of the book.

A part of me wishes we could have seen a little bit more of the mad experiments being conducted in the basement. This isn’t because of any lack in the book itself but simply because I come from a science background and it’s not very common to see genetic engineering forming the backbone of a premise. Wither utilizing it in this way made me realize I deeply yearn for a book that features lots of genetic engineered shenanigans. (I liked that aspect of The Hunger Games too.)

The romance, such as it is, with Gabriel was a very understated one. I’m tempted to say it was too understated, but this is what I’ve come to expect from the YA genre these days. Heroine meets a new boy. He’s nice to her but also forbidden to her in some way. Obviously, they fall in love. It’s becoming hackneyed. Where’s the surprise? Where are the twists? Where are the moments that show why these two, above all else, should fall in love other than the fact that he’s the only available guy around? On the other hand, I was very glad that a love triangle was not set up and that Linden was never portrayed as a viable love interest. That would have been very gross.

The main highlight of the book for me, though, was the prose.

I wait. They keep us in the dark for so long that we lose sense of our eyelids. We sleep huddled together like rats, staring out, and dream of our bodies swaying.

I know when one of the girls reaches a wall. She begins to pound and scream — there’s metal in the sound — but none of us help her. We’ve gone too long without speaking, and all we do is bury ourselves more in the dark.

It was lovely, and Rhine’s voice carried me throughout the entire novel without complaint.

Blearily I sit up and take the tea. I hold it near my face and breathe the steam in through my nose. It’s all I can do not to burst into tears. The boy must sense that the full impact of what has happened is reaching me. He must sense that I’m on the verge of doing something dramatic like crying or trying to fling myself out the window like that other girl, because he’s already moving for the door. Quietly, without looking back, he leaves me to my grief. But instead of tears, when I press my face against the pillow, a horrible, primal scream comes out of me. It’s unlike anything I thought myself capable of. Rage, unlike anything I’ve ever known.

It was so absorbing that it wasn’t until I finished and started thinking about the book that things started niggling me. That, in itself, is something worthy of note. But readers will notice that it is in first person present tense, and I thought it appropriate to point out because I know that particular style can be a dealbreaker.

Despite my overall complaints and an ending that make me roll my eyes a little ([spoiler]believe me, if I run away from the mansion of a mad scientist with my forbidden servant boyfriend, the last thing I’d do is stop and take in a movie while making my getaway[/spoiler]), I did like this book. The comparisons other people have made to The Handmaid’s Tale are very apt, but I also think certain aspects pay tribute to Children of Men. People who liked both of those titles and would like to read something similar for the YA set could do much worse than start here. B