Among my first and most beloved romantic novels are the novels of Mary Stewart. Although probably best known for the Merlin fantasy trilogy, I first discovered the romantic suspense novels. When I saw that at least one was being rereleased I quickly asked to review, despite the fact that it was a print book and I haven’t read a genre book in print form in quite a while. Wildfire at Midnight was never my favorite (that spot goes to The Ivy Tree, with Airs Above the Ground close behind), but I liked it enough to reread over the years, and the depiction of the Isle of Skye has always stayed in my memory. I wondered how well the novel would hold up, and I was pleased to find that while it is most certainly a product of its time, I thoroughly enjoyed it. 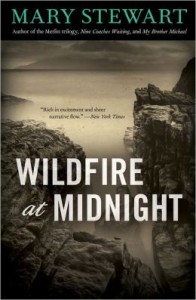 Giannetta Drury is a divorced fashion model in her late 20s who impulsively decides to go to a remote lodge on the Isle of Skye to recuperate from the demands of her job and the madness of London during the coronation of Queen Elizabeth II. When she arrives she discovers that not only has a young woman been brutally murdered earlier in the month, but her former husband, Nicholas,his is also a guest at the lodge. She quickly removes her wedding ring (which she still wears) and registers in the hotel book under her maiden name.

The small lodge has about a dozen guests, and the types will be familiar to readers of mid-century murder mysteries. The unusual characteristic is that given the location of the lodge and the time of year, the majority of the guests have chosen it for its excellent fishing and mountain climbing opportunities. There are two married couples, give single men, a beautiful actress and her young, handsome chauffeur, a pair of women schoolteachers, and the locals who own and staff the lodge and provide fishing and mountain climbing expertise. Giannetta quickly gravitates toward the actress, Marcia Maling, and Roderick Grant, a handsome Scotsman who loves the mountains and is extremely knowledgeable about local folklore.

The murder plot ramps up fairly quickly and takes a well-trodden path. Two more murders are committed within a day or two of each other, and practically all the men are suspects. You’ll probably guess the murderer by process of elimination, but the motive for the murders is less predictable. The evocation of the setting is expertly done; the reader feels embedded in the wild, beautiful Scottish setting without ever feeling like she’s reading an infodump:

At half past nine on a summer’s evening in the Hebrides, the twilight has scarcely begun. There is, perhaps, with the slackening of the day’s brilliance, a somber note overlying the clear colors of sand and grass and rock, but this is no more than the drawing of the first thin blue veil. Indeed, night itself is nothing but a faint dusting-over of the day, a wash of silver through the still-warm gold of the afternoon.

The evening was very still, and though the rain-threatening clouds were slowly packing higher behind us in the southwest, the rest of the sky was clear and luminous. Above the ridge of the Sgurr na Stri, above and beyond the jagged peaks of the Cuillin, the sun’s warmth still lingered in the flushed air.

The style of the writing, the dialogue, and the characters’ behavior are very much of their time; a bluntly spoken character (a woman) is depicted as rude and aggressive, the women are almost all wives (or sultry sirens) first and individuals second. And everyone smokes like a chimney, despite all the physical activity.

Giannetta is one of Stewart’s more naive characters, which makes her naive indeed, but at least she is well aware of it. She is lovely, but we never hear that from her, and it’s a relief to have a beautiful heroine who isn’t constantly being told how beautiful she is by everyone else in the novel. Although she is divorced and has no expectations of getting back together with her ex-husband, she still has feelings for him, and he appears to have feelings for her.

Readers who cannot stand cheating might do well to take a pass. It is pretty clear that the trigger for Giannetta and Nicholas’ divorce was his adultery, which Giannetta at least partly attributes to their incompatibility and her youth, so self-blaming heroine ahoy. And then in the first few chapters, she discovers Nicholas locked in an embrace with the beautiful actress. We can’t be sure that Nicholas is the hero because Roderick is quite attractive and clearly smitten, but there’s plenty of unfinished business between the estranged couple.

The book should probably be categorized as a novel with romantic elements; the mystery is more important that the development of the romantic relationship, and while the couple do wind up together in the end, it’s not obvious who the hero is until almost the end. When we do find out, it’s the last chapter, the mystery is solved, and the book is over.

I don’t mean to sound less enthusiastic about the novel than I am. I had a terrific time revisiting it, but I know that the issues I’ve outlined can be deal breakers for some readers. Giannetta isn’t TSTL, by any means, but she still feels very young and naive despite being almost thirty, and since the book is written from the first person POV, we spend a lot of time in her head. I found her quite appealing, though; after reading so many contemporary romances where the heroine is either beautiful and incredibly gifted at one extreme or extremely lacking in confidence at the other, her unselfconsciousness is refreshing. There aren’t many books written today where a well-known model would be depicted as a relatively normal person.

If you haven’t read Mary Stewart before, this is a good place to start. It’s a relatively short novel (less than 220 printed pages), the story is linear and compact, the mystery is interesting. The book takes place over a few days and the fictional mountain climbing storyline takes place during the first successful ascent of Everest, which gives the story an added depth. Grade: B