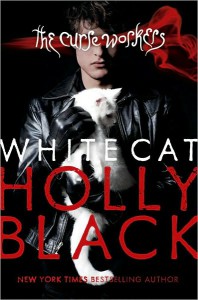 I was first introduced to your books a few years ago with your debut, Tithe, the first in a series about faeries in modern times. In some ways, I consider those books to have kickstarted the popularity of faeries in recent young adult fiction. That said, I’ve made no secret of the fact that faeries are among my least favorite denizens of the supernatural menagerie so I just didn’t love Tithe as much as many other readers did. I admit I felt a little left and that maybe I was missing out on something. So when I heard you were starting a new, non-faerie series, I leapt at the chance to review it.

Cassel Sharpe comes from a family of criminals. Unlike his brothers and his mother, however, he’s trying to go straight. You see, in Cassel’s world magic is real and is outlawed in the U.S. This doesn’t stop it from proliferating, of course. What magicians, or curse workers as they’re called, don’t get drafted into “service” by the government end up on the other side of the law. It turns out that ever since curse work was made illegal during the Prohibition era, curse workers have formed gangs. That’s right. In the world of White Cat, the mafia is made up of magicians.

As you can guess, Cassel’s family consists of nothing but curse workers. His mother manipulates emotions. His brother, Philip, can shatter bones with his pinky. And his grandfather? His grandfather can kill you with the mere touch of a single finger. But despite all that, Cassel has no ability whatsoever. So despite his infamous family ties, he’s trying to live a straight, completely legal life at the private school he attends. Of course, I personally can’t help but laugh that his concept of straight living involves running an illegal betting ring at school so he can pay his tuition. Details, details.

Unfortunately, despite his best attempts, Cassel’s plan is doomed to failure. Not only has he been sleepwalking, waking up to find himself in the most inconvenient of places, he’s positive his brothers are keeping something from him. Add in a mysterious white cat that’s been invading his dreams at night and stalking him at all other times, Cassel has a mystery on his hands that needs solving.

What a fun book! I really liked Cassel a lot. You can’t help but sympathize with him as he struggles with people judging him for coming from one of the most infamous curse worker families in the U.S. while not actually having any ability whatsoever himself. What I enjoyed best about his character was that even though he didn’t have access to curse work for the majority of the book, he was able to use his smarts to counter his brothers’ plot. I’d say Cassel learned his mother’s lessons in how to be a con artist best out of all the sons.

I also enjoyed the worldbuilding, which I thought was very well done. Magical mafias and curse work families? I’m there. I liked the fact that the curse work was diverse but still logical since it can only be done via touch, hence the importance of gloves in society. As a longtime fantasy reader, I appreciated the fact that curse work has a cost. Cassel’s mom can manipulate emotions — such as causing men to fall madly in love with her — in others, but it’ll rebound and make her a mess. His grandfather can kill people, but he’s lost all the fingers on one hand as a result of that work. You can alter someone’s memories, but you’ll lose some of your own in exchange. It’s a logical world with a clear system of checks and balances.

It was also very realistic to see that even though curse work was made illegal in the U.S., it wasn’t that way all over the world and that even in the U.S., people were lobbying to make it legal under certain circumstances. The paranoia that Cassel’s mother and other curse workers depict at being watched and monitored certainly made sense and echoes our reality today.

I’m a sucker for family books — that is, books that show family relationships in all their ugly, messy glory. White Cat definitely delivers on that score. Cassel loves his brothers but as with all family relationships, that love is intertwined with envy, jealousy and resentment. The exasperation he has for his mother, who’s in jail, will no doubt remind many people of parental relationships. But I admit, my favorite family member was Cassel’s grandfather, who was famous for what he did and yet lived in Jersey and made his grandsons do mundane work like mow the lawn when they stayed at his house during the summer. He was more like the cranky old man next door than a feared mafia hitman.

As for the mystery surrounding Cassel and his midnight walks, I figured out pretty early in the book what was going on. I’m interested in hearing from other people who’ve read the book to see when they figured out the deal between Cassel and his brothers. Did you figure it out early on or did you only realize it during Cassel’s revelation? I don’t want to spoil what the mystery is but I think readers should go into the book knowing as little as possible because I believe puzzling out the clues is fun. (But if readers want a more specific clue, look at the tags for this post.)

I’m pleased to discover I like this new series of yours far more than I did Tithe and its sequels. I don’t know where we’re going from here, and I’d like to say that the ending was completely heartbreaking, but I’m definitely along for the ride. B

This is a hardcover published by Simon & Schuster and thus subject to the Agency Five pricing.