REVIEW: Whisper to Me by Christina Lee 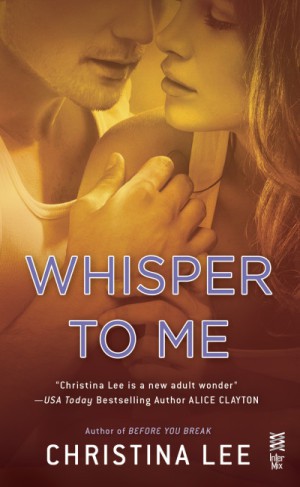 I loved your debut novel, All of You, about Avery and her virgin hero. While I was less enthused about the follow-up, I did appreciate some things about it. The latest book in the series, Whisper to Me, tells Rachel’s story.

We first met Rachel in the previous two books and learned that she hates being tied down. One night stands and simple makeout sessions are her modus operandi. The explanation given for this is that she got engaged to her high school sweetheart and it were sour. In Whisper to Me, we learn that’s not exactly true. In fact, what is true is worse.

When Rachel was in high school, she was in a motorcycle accident. We’re talking brain injury and rehabilitation required to walk again levels of awful. Her boyfriend at the time, who had been driving the motorcycle, couldn’t handle the guilt and abandoned Rachel early on during her recovery. The only person who kept her together was Kai, her best friend’s older brother. Once Rachel recovered from the accident, she went off to college and decided to reinvent herself like many teens do, though perhaps her reasons were more justified than most.

But Rachel is now back home for the summer to help with her mother’s store. (The business major comes in handy for that.) Being back reminds her exactly why she left in the first place: she’s that girl, the one with the brain injury. She hates the stigma, and she hates seeing her ex and his clumsy attempts to absolve himself of guilt.

Enter Kai, who is also back in town, after yet another supposed screw-up. He provides the distraction Rachel desperately needs. Except this is Kai, who is one of her oldest, best friends and who was there for her during her darkest time — how can this possibly remain a fling?

I admit it. Childhood friends to lovers is a bulletproof trope of mine. I eat this kind of relationship up with a spoon. I was utterly charmed by the idea of Kai accidentally falling in love with Rachel during her rehabilitation and then hiding it from her all this time. Yes, Kai is the typical bad boy (tattooed, pierced, ladykiller, musician) who takes care of those he loves but something about him helping Rachel throughout her recovery kept it from becoming stale.

I also liked the fact that while Kai is a musician, he’s not a rocker. He’s just very musically inclined and can play many different instruments (though upright bass is his instrument of choice). He’s someone who spots good music and can bring out the best in a musician. Before he came home in disgrace, he was working as a sound engineer. There’s a technical component to his talent that appeals to me more than the stereotypical NA rocker hero.

The fact that Kai was biracial is much appreciated. It was’t exoticized or The Point, and I like that. I also liked that Native Americans were not portrayed as all the same. Kai’s dad owns a casino and he thinks that he’s doing something great because he can hire Native Americans and give them work. But others think it only contributes to their culture’s various difficulties. This is not a plot point and they don’t make a big deal of it but I liked that it was presented as a background detail and acknowledged, if only in passing.

The main downside of this book is that because of much draws upon past events, there are constant not-quite-flashbacks. This kept throwing me out of the book because for me, new adult novels are immediate and in the now. To keep constantly referring to the past like this via narrative summary made the book drag a little. Maybe actual fully fledged flashbacks would have been better but then again maybe not.

I really liked Rachel’s struggle to come to terms with her ex. What happened to her was a terrible thing and what he did to her was just as shitty but there’s a truth to it. Relationships can be messy, neither black nor white. Do I like what the ex did? No, absolutely not. But he was, what, 17? I don’t know that I can expect a 17-year-old not to freak out and run. If new adult is about growing up and becoming an actual adult, I think this realization of how relationships are not simple and people are complicated was a perfect illustration.

I’m not sure I bought Rachel’s reticence to tell her friends the truth about her past. It just seemed like she was hiding it unnecessarily. I suppose part of me thinks she could have told a modified truth about her ex rather going down the “we were engaged!” route.

Overall, I liked this book better than the last one. I really like stories in which the line between friend and lover is crossed and they try to navigate the chance without wrecking the existing friendship. I’m still on board for your series and can’t wait to read the next book about the tattoo artist heroine. B