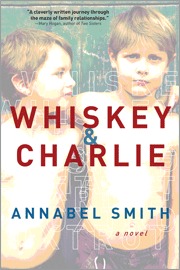 A captivating debut novel of brothers who have drifted apart and the accident that will determine their future, by an unforgettable new voice in fiction.

Whiskey and Charlie might have come from the same family, but they’d tell you two completely different stories about growing up. Whiskey is everything Charlie is not – bold, daring, carefree – and Charlie blames his twin brother for always stealing the limelight, always getting everything, always pushing Charlie back. By the time the twins reach adulthood, they are barely even speaking to each other.

When they were just boys, the secret language they whispered back and forth over their crackly walkie-talkies connected them, in a way. The two-way alphabet (alpha, bravo, charlie, delta) became their code, their lifeline. But as the brothers grew up, they grew apart.

When Charlie hears that Whiskey has been in a terrible accident and has slipped into a coma, Charlie can’t make sense of it. Who is he without Whiskey? As days and weeks slip by and the chances of Whiskey recovering grow ever more slim, Charlie is forced to consider that he may never get to say all the things he wants to say. A compelling and unforgettable novel about rivalry and redemption, Whiskey & Charlie is perfect for anyone whose family has ever been less than picture-perfect.

I encountered your book in a Barnes and Noble store, took a look, and liked what I saw. When I tried to buy a kindle version, however, it turned out that the ebook was not out yet. I did not have the patience to wait another three weeks, so the next day I went to the store and bought the paperback (now you can purchase the ebook version as well).

I really liked this book but now that I’m I finished I do wonder whether I liked it so much because it hit some of my buttons or because the story was really written and executed that well. The reason I am saying this is because the story is told mostly in flashbacks, and more often than not I prefer a linear storytelling method. Not that flashbacks never work for me, sometimes when we have a very important event being told in one or two flashbacks, it makes sense, but usually I dislike the “present – past, present- past, present-past, repeat many times” timeline. In this book, however, I really liked it.

As the blurb tells you, the story is about a pair of twins and their family, and how small things over the years worsened communication between the two men so much that for the last few years they pretty much did not talk except exchanging greetings at family events. Now one of the brothers, Whiskey, is in a coma and his twin, Charlie, is full of guilt and regret that he will never be able to patch things up between himself and his brother. The action in the present is pretty much Whiskey in the coma and his family members interacting and worrying and wondering if he will wake up. It is more than that, really, but that’s the gist – life revolves around the loved one who is so ill and might die at any moment.

A word of warning: I think this story can definitely be triggering for those who have had to deal with a loved one in a coma. I thought the writer dealt with the subject with a great deal of sensitivity, but once again, proceed with caution. She briefly talks about the research she did about comatose patients and the issues surrounding them, and what their loved ones go through at the end, but I am not sure if the details are correct. I thought the worry and the pain were well portrayed and did not go into angst for the sake of the angst. I will be honest, I could not subject myself to that kind of tension and checked the ending of the story – for those who want to know here it is under the SPOILER

( There is no miraculous recovery for Whiskey, but there is a recovery enough to make me feel that the story ended as happily as it could have. He is using a wheelchair at the end of the book, he has forgotten a lot of things because of the brain injury and had to relearn a lot of things, but there are some important things he remembered and some of them included his relationship with his brother)

I mention the buttons that the story hit for me – I really like stories where a person realizes their mistakes and tries to correct them, and Charlie certainly feels guilty about how things went down with his brother. The flashbacks are him remiscenting about their life from early childhood up to the accident. The chapter titles are named around the alphabet and you will see why if you decide to read the book. I understood the purpose, but I thought it was a little bit contrived.

Speaking of contrived – in general the characters in the story felt like real people and the plot, while understandably depressing for much of the book, also felt genuine, moving, and hopeful at the end. However one plot twist felt *very* soap opera like, the characters even say that – it does not diminish my love for the story, but it did feel contrived, inserted in order to let another character practice how to behave, if that makes sense.