REVIEW: Where the Stars Still Shine by Trish Doller

Something Like Normal was one of my favourite books of 2012 (reviewed here by Jane and at my own blog), so I made grabby hands when Jane asked me if I wanted to review Where The Stars Still Shine, your newest release.  I love your writing style and the way you are able to portray authentic younger characters in a way that I can connect with.

The story is told from Callie’s first person (present tense) POV which is common in YA but I know is a deal breaker for some readers. It worked for me here.  The story is not bogged down in minutiae and there is a sense of discovery to the story which is fitting – the reader finds things out at the same time Callie does. It also feels vaguely claustrophobic which I felt was also appropriate because Callie is suspicious of others and quite insular.

“He totally is.” Kat nods. “He’s super shy, but he really likes you.” I glance up and he’s staring at me again. It’s not predatory, the way he looks at me. Nor is it the same as the other night with Alex Kosta, when the air between us felt alive. Kat is wrong. Connor doesn’t know me so he can’t really like me. He likes looking at my face. He likes the shape of my body.

There is a difference.

I am a romance rea 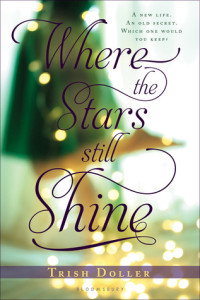 der at heart so in any story, I tend to gravitate to the romance thread and the book’s success often depends for me, on how the romance works.  I think if one were to approach the book as a YA with a romantic element rather than as a romance (as I did – partly because the romance was strong in Something Like Normal and partly because that’s what I tend to do anyway) the book would work better. As it was, I liked it very much but the ending left me feeling unsatisfied.  There were many questions left unanswered for me, even though it was a hopeful (if somewhat vague) resolution.

To be fair, the blurb of the book doesn’t really promise a romance:

Stolen as a child from her large and loving family, and on the run with her mom for more than ten years, Callie has only the barest idea of what normal life might be like. She’s never had a home, never gone to school, and has gotten most of her meals from laundromat vending machines. Her dreams are haunted by memories she’d like to forget completely. But when Callie’s mom is finally arrested for kidnapping her, and Callie’s real dad whisks her back to what would have been her life, in a small town in Florida, Callie must find a way to leave the past behind. She must learn to be part of a family. And she must believe that love–even with someone who seems an improbable choice–is more than just a possibility.

Possibly a caveat is in order.  My review is based on my perspective as a romance reader, not a YA reader. I think YA readers, who maybe have different expectations of a book than I, will find the ending less problematic.  This is very much Callie’s story.  The book wraps up appropriately for Callie and I had only a few questions (did she get her GED?), the answers to which weren’t really crucial for me to know.  Most of the questions I had were about Callie’s romantic interest and his life and his arc.  The story gave me enough to be invested in him but unfortunately, I was not clear on some important things by the end.  While the romance had a kind of hopeful ending, it’s not the traditional arc most romance readers would want or expect.  In my defence, I think there’s enough in the book which leads a romance reader to expect a more definitive ending.  It is a very strong storyline, not unlike the relationship between Travis and Harper in Something Like Normal.  So I didn’t feel it was an unreasonable expectation on my part to have an ending which was more developed.  YMMV.

When Callie moves to Florida with her dad, she is surrounded by people who love her but don’t know her, by rich family history she doesn’t know or can’t remember, and she feels under tremendous pressure to be happy to be “home”.  But it’s not as easy as that.  The relationship between Callie and her mother is complicated.  Callie is very angry with her mother but, at the same time, Veronica has been the only constant in her life for 12 years.  Callie feels bereft without her mother and, mixed in with that is a deep sense of responsibility – her mother is mentally ill and Callie doesn’t think her mother will make it on her own.

Callie’s dad, Greg, is just about perfect and I liked him very much.  He tries very hard to be understanding and not pushy, to give Callie space but still include her as part of the family.  While the book is Callie’s there is a strong sense that Greg’s loss was profound, that he genuinely loves and wants relationship with his daughter. I liked the way you wrote Greg – from the small parts of his story, I felt I knew him well.   Phoebe, Greg’s wife, is presented in an understandable fashion.  She and Greg have two young sons – can Callie be trusted with them?  Is Callie unstable like her mother?  As the book progresses, I got the sense that eventually Callie and Phoebe would become friends but that Phoebe would never be a parent to her.

Unlike Callie’s mother, Greg is actually present for and interested in Callie.  He gives her boundaries, opportunities, a place to be safe and loved and, when she asks for his help he is there – 100% of the time – something which is entirely new in Callie’s experience.  As he continues to demonstrate his love for her, he moves in Callie’s heart and mind, from “Greg” to “dad”.  This does create a new dilemma however – it seems impossible for please both her mother and her father.  Her friend and cousin Kat suggests she decide purely based on what will make her (Callie) happy, which is a new and exciting concept.

Callie has never had friends or a boyfriend.  She and her mother have moved so often and so suddenly there wasn’t any time to build those kinds of relationships.   Faced with so much unknown in Florida, Callie turns to a familiar path – the hook up – for connection and, in a weird way, safety (the known being safe in this case).  Only here, she finds that after sex, the boy wants to talk to her as well and she doesn’t feel dirty and used and sad. She finds pleasure in sex in a guilt-free and healthy way.  For different reasons, both she and her young man are disconnected and they find connection and acceptance in each other.

“You probably think I’m the weirdest girl you’ve ever met.”

The setting of Tarpon Springs with its Greek affiliation and sponge diving was interesting and gave the book extra flavour which I appreciated.  The little bookshop featured in the story was my kind of place.  I could imagine myself hanging out there and making words with the couch cushions.

At its heart, I think it is a book about Callie finding home – a place where she belongs, is safe and can grow.  A place she hasn’t had since her mother kidnapped her when she was 5.  Looked at purely from that perspective, the book was a success and I’d give it a B.  However, as a romance, I really would have liked at least another chapter to round out that part of the storyline and buttress the HFN.  As beautiful as it was to read, the ending did let the book down for me and as a romance (which is how I read it) I give it a C+.