I’ve been a devotee of your Sebastian St. Cyr mysteries since the first book, What Angels Fear, was published in 2005. Where Shadows Dance is the sixth book in the series featuring an aristocrat turned amateur detective in Regency-era London. 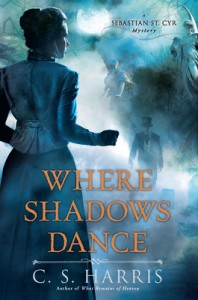 The book opens with doctor Paul Gibson taking receipt of a fresh (well fresh-ish) cadaver from a couple of resurrection men . Gibson, as a surgeon, has a keen interest in human anatomy, but like other doctors of the era, he’s prevented by law from obtaining bodies for study legally. Gibson has actually “ordered” this specific body, that of a young man named Alexander Ross, after hearing of Ross’ death several days previous, apparently from an undiagnosed heart ailment. Gibson cannot resist the opportunity to study the heart of a young and apparently healthy man to see if he can discover what made it stop. However, it doesn’t take Gibson long to discover a small but deep knife wound at the base of Ross ‘ skull, evidence that he was in fact murdered. Now Gibson faces a dilemma; he cannot reveal his knowledge of Ross’ murder without his own illegal activities coming to light. He turns to his friend Sebastian St. Cyr, Viscount Devlin for help.

Sebastian has a full plate already without a new murder investigation, but he cannot turn down an opportunity to try to bring a murderer to justice. He has recently proposed marriage to Miss Hero Jarvis, daughter of Sebastian’s sworn enemy, Lord Jarvis. Hero and Sebastian have sparred for several books – she is a rather formidable spinster/bluestocking type who has ended up entangled in several of Sebastian’s mysteries. The two hadn’t previously had too many overt romantic sparks, perhaps chiefly because Sebastian has been consumed with his long and complicated relationship with Kat Boleyn, an actress with a tormented and tangled past. Events in one of the previous books led to an unexpected encounter between Sebastian and Hero, and Hero is now pregnant with his child. Both are ambivalent about the upcoming marriage; Hero had never planned to marry, being that she considers marriage to be comparable to indentured servitude for women. For Sebastian’s part, though he admires and perhaps is attracted to Hero, he cannot let go of his feelings for Kat, who is now married and beyond his reach. Sebastian also has a very strained relationship with his father, one that has been impacted by some shocking truths about Kat.

I’m not a huge mystery fan, so I will be upfront and say that I mostly read these books for the continuing, evolving story of the lives and relationships of the main characters. I find Sebastian, Hero, Kat, Paul Gibson and the Earl of Hendon (Sebastian’s father) to be interesting and sympathetic characters. I have mentioned before that I have some ambivalence about the Sebastian/Kat/Hero love triangle. Normally, I’d be all for the pairing of an aristocratic hero with an actress/fallen woman with a tortured background. I’d be less enamored of the more conventional and expected pairing of Sebastian with the feisty Wollstonecraftian virgin of good birth. But while the outline of Hero’s character reads like a collection of romance cliches, the character herself has been imbued with depth. She’s smart, tough and sympathetic, and has her own complex relationship with her father, a rather shady character with a lot of power in the government but few apparent scruples.
Besides my fondness for Hero, I have felt for a while now that a relationship between Kat and Sebastian is just too loaded with baggage to ever result in a satisfying HEA. I do like Kat, but I guess I would say I’m Team Hero for now (and events in this book furthered that allegiance).

The mystery of Ross’ murder is rather complicated (as murder mysteries generally are, I guess, at least in novels). Ross turns out to have worked in the British Foreign Office under Sir Hyde Foley; Foley subsequently becomes a suspect. It’s discovered that another man, an American, was murdered on the same day as Ross by the same method. Suspicious characters begin to pile up. There is some business involving an American who has been impressed into the British navy, and his father and sister’s efforts to free him (these events occur on the eve of the War of 1812). There’s a French ex-priest and bookdealer who claims to be fervently anti-Napoleon, but Sebastian isn’t so sure. There’s a Swedish trader, Carl Lindquist, who was connected to Ross and appears to have been acting in some sort of sub rosa capacity for the Swedish government. Finally, there’s a Turkish diplomat who was seen arguing with Ross shortly before the man’s death, possibly over Ross’ relationship with the man’s wife. Some of these threads, at least, are tied up in political goings-on of the era, having to do with England’s relationship with Russia (I think). Honestly, it was all more than a bit byzantine to me, at least in part because I’m not that familiar with the Anglo-Russian War of 1807 to 1812. Actually, I don’t think I was aware that there was an Anglo-Russian War of 1807 to 1812. According to both Where Shadows Dance and Wikipedia, it was mostly a war in name only, and had something to do with the Russians trying to keep Napoleon appeased (anyone who knows more is welcome to correct me if I’m wrong on this). The Swedes were involved somehow, too. I think.

Look, I like history. Scratch that, I love history. Maybe it’s that I just don’t know enough about this aspect of European history, and the book either doesn’t explain it well enough, or there’s an assumption that the reader does know more than I did (which I think is fair – I actually prefer authors under-explaining historical events – I can always look stuff up if I’m interested – if the alternative is an info-dump of historical facts). But the point is, there were a number of discussions in this book that I had a good deal of trouble following. I didn’t understand the connections between the Russians and the Swedes and the Turks, and how that all related to Napoleon and the French. The Americans, at least I think, were a separate issue.

I just realized that I left two people off my suspect roundup above. Man, that’s a lot of suspects. Luckily (?), more murders occur, and as the bodies start turning up the suspect list does shrink. Still, having so many people involved didn’t really help my already-present confusion.

So, I don’t know that I can evaluate this book much as a mystery. Perhaps a proper mystery reader wouldn’t have issue with the number of suspects running around, or confusion about what was going on. In fact, that is probably the case. I am capable of being absorbed by mysteries, though (I’m thinking of Mistress of the Art of Death series; the mysteries in that series have been pretty decent). The Sebastian St. Cyr book that was most successful to me as a mystery was Why Mermaids Sing, but I’ve never been sure if that’s not because it’s rather luridly gruesome. I suppose in general I do better with murder mysteries that feature a personal reason for the murders than those with a lot of political intrigue.

This is all to say that I’m not going to mark Where Shadows Dance down because the mystery didn’t do much for me. As I noted, I mostly read the series for the characters and the developing relationships between them. In that sense, this book was relatively successful. That aspect of the story is being stretched out from book to book, which is to be expected. There was some progress towards the very end of Where Shadows Dance, and I will be interested to see how things develop in the next book. My grade for this book is a straight B.
Best regards,
Jennie