REVIEW: Walking Back to Happiness by Lucy Dillon 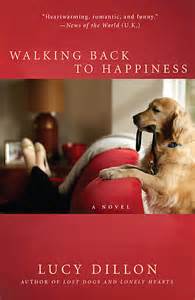 “Juliet’s hiding from her feelings about the recent loss of Ben, the love of her life. If it weren’t for having to walk Ben’s loyal dog, Minton, she’d never leave their half-finished house. Then her mother asks her to take her elderly lab, Coco, along. One dog leads to another, and soon Juliet’s the unofficial town pet-sitter. And when she takes on a lonely spaniel, and gets to know its attractive owner, she realizes that her emotions aren’t as easy to handle as her canine charges…”

Though all my children now are cats, I’ve had dogs before and still miss daily walkies from time to time. Less so when the weather is bad, I’ll admit. Since I’d enjoyed an earlier book of yours, “Lost Dogs and Lonely Hearts,” that features dogs helping their owners over a variety of issues, I’d collected two more. When I realized I was in the mood for a quiet romance, I thought, “A-ha! It’s time for a Lucy Dillon novel again.”

The pain Juliet still feels at the loss of her husband is poignant. Living amidst the unfinished house the two of them had planned to renovate and with only their dog Minton to keep her company during her Grief Hour each day, Juliet is still emotionally stuck. Ben’s sudden death also left her with things said which could never be unsaid and wishes that will never come true. Her family has been supportive through it all but are now worried that she’ll never get out of the house again. Since this is the main issue in the book, it makes sense that the most time is spent easing Juliet past her still aching grief and back to wanting to move forward in her life again.

I had to laugh at her mother’s not-so-subtle maneuvering both to get Juliet out of the house to walk dogs and to get the handsome Irish handyman from next door into Juliet’s house to finally get a proper shower fitted, tiles laid and grout done. At the same time, I liked that no one ended up forcing Juliet into anything she wasn’t quite ready for. Interfering relatives can kick start a book plot but if they get too pushy, I end up wanting to swat them.

Juliet’s not the only person with issues here. Her perfect older sister has the seemingly perfect house, perfect husband, perfect toddler and now is going back to the job she used to ace before maternity leave. But Louise is hiding a dark secret that might blow all this perfection up in her face. While Louise’s marital woes are more common than Juliet’s, each sister finds that you can’t force emotions that aren’t there nor can you move past ones that still grip you and tear at your heart.

I’ll be honest and admit that I was hoping for a little more overt romance here especially as Juliet is actually 8 months into her widowhood instead of the more recent bereavement the blurb hints at. Over the course of the book, she is often thrown together with the man who ultimately might be her next love though it’s not until late in the book, Brit Chick late in a book, that both of them are willing to admit their tentative feelings for each other. In the meantime, it’s fun to watch them knock heads a little, actually get to know each other fairly well and pass the test of friends and relations.

Louise gets a marital wake-up call she never expected and one which calls on her to honestly examine what she wants from her marriage and how far she’ll go to save it. Readers with an adultery trigger might be best forewarned. I’m still debating how I feel about the resolution of this plotline.

Where does the book grab me and hang on? Of course, the dogs – and some cats. The descriptions of walking dogs, meeting other dog walkers and knowing them by their dog’s name is so true. Being dragged via a leash after or towards something that smells wonderful? What dog owner hasn’t had this happen? Having a dog curl up next to you and offer silent, non-judgemental comfort? That’s one of the best things in life and Minton is such a darling dog while he does this. There’s enough serious to balance the funny and thank heavens it never gets schlocky emotional so I think even non-animal people will enjoy this aspect of the story.

This is a nice “prop your feet up and sink into it” kind of gentle story. The issues are realistic, the emotion rings true and there are dogs! And cats, too. B