I’m a long-time fan of yours. My first exposure to your work was Bitten, the first novel in your Otherworld series about the only female werewolf in existence, several years ago before urban fantasy took off and became the sprawling subgenre it is today. I know I’ve said in the past that I’m weary of urban fantasy but that doesn’t seem to apply to your work at all. Even when I miss a few releases, I find myself glomming the books I skipped and desperately wanting more. 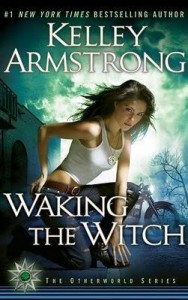 We first met Savannah Levine in Stolen at the ripe old age of 12. The daughter of an infamous witch known for practicing darker magic and a Cabal sorcerer (Cabals are kind of like supernatural mafia masquerading as large corporations in the Otherworld series), Savannah is a perfect illustration of how children often pay for their parents’ mistakes. The legal ward of another witch and sorcerer couple — who this time are well-known in the supernatural world as crusading do-gooders — she has grown up immersed in the paranormal world. She spends summers with a werewolf family. She’s friends with a necromancer who has regular contact with her dead mother. She has a tenuous relationship with her half-brother, who’s heir-apparent to one of those Cabals. And she’s been in love with a firestarting half-demon since forever.

In Waking the Witch, Savannah is now 21. She’s worked with her legal guardians, Paige and Lucas, at their detective agency since she was 16. Eager to prove herself, she jumps at the chance to take on a case involving the potentially ritualistic murders of three young women. Paige and Lucas are on vacation in Hawai’i, which means she’d be working by herself but Savannah sees this as a way to prove her independence.

Over the course of the series, we’ve watched Savannah grow up and one of the things readers familiar with the Otherworld series will know is that she’s made lots of mistakes as teenagers growing up do. With Savannah’s background, that’s not surprising. Her mother was killed when she was young. She never really knew her father and with the exception of her half-brother Sean, her father’s family refuses to acknowledge her despite the fact that she has their clan’s very distinctive blue eyes. Because of her mother’s reputation, Savannah has never been liked amongst other witches and Paige lost her standing within the Coven because of Savannah. To say that Savannah has underlying guilt issues is an understatement. She usually bears it well but it manifests in other ways. One of them is the strong desire to prove herself worthy of the right to exist, let alone deserving of the love and trust other people hold for her.

I’ve always liked Savannah. I’m aware she can be easily construed as that precocious, overpowered child who grows up into a sassy woman who’s all attitude with nothing to back it up. The truth, however, is that Savannah can back it up. Witches and sorcerers are traditional enemies in the Otherworld and can’t stand each other. Someone of her mixed parentage is pretty much unheard of, so her power potential is very high. She’s not all good like Paige and Lucas, but she’s not all bad like her mother either. Her attitude is tempered by a lot of smarts and pragmatic competence.

“…To me it means we have a database access on the road. Of course, I could just walk twenty feet and pull this up on a computer, but that wouldn’t be nearly as impressive. Would you like the list texted to you, e-mailed, or sent to our printer?”

“Okay, now you’re just showing off. Text it.” He handed me a card with his cell number and I punched it in.

“So I’m guessing this is what you need from us — you supply the details and we’ll access our resources to figure out which ritual you’re dealing with. If we’re lucky, what she has in her hand will answer all our questions. Well, except whodunit. That’s your job.”

“See, now this is why I asked to talk to Lucas,” he said. “If I showed him this, he’d be all, ‘Hmm, this bears investigation. I take it you’re on the case?’ And I’d be, like, ‘Well, I will be, right after I finish a job.’ Then he’d ask if I minded if he looked into it himself, and say he’d hate to take a job from me and I’d joke that it’s not a paying one anyway and if he wants to take a look…”

“So you actually brought this to us hoping we’d investigate it for you?”

His cheeks colored. “Shit. Could you just channel Lucas for a minute? Please? Make me feel like a generous colleague?”

“If you were truly generous, you’d be passing us a paying case.”

I like that because if there’s one thing I hate in an urban fantasy heroine, it’s one who talks about how tough she is and then proceeds to lock herself accidentally in a basement with a homicidal maniac. I shouldn’t have been worried about this since none of your previous heroines, as varied as they have been, have ever suffered from TSTL syndrome but because of the way Savannah is, I could easily see her slipping into that role. Plus, I appreciate Savannah’s ruthless bluntness. Do-gooders have bills to pay too.

Another thing I liked was the relationship between Savannah and Kayla, one of the murdered women’s daughters. It was a good parallel because Kayla’s mother has a bad reputation that, sad to say, was deserved. It shadows Kayla wherever she goes, which is a shame because Kayla is very smart and precocious. Sounds like someone else we can name, right?

As for the actual plot, I thought it seemed more like this was a set-up for future books. I don’t have any complaints about that aspect of it since this is such a long-running series with no end in sight, but I was far more interested in the witch hunter angle than I was in the “let’s use Savannah as bait again” angle. I was a little disappointed that we didn’t get more of the witch hunter subplot since that’s definitely a new revelation and something that alters the playing field. (I haven’t read your Otherworld YA series so maybe witch hunters play a role there but this was new to me as someone who’s read all the books in your adult series.)

And speaking of disappointments, what’s up with Savannah and Adam? I have been waiting to see what happens to them since we discovered that Savannah had a massive crush on him. That said, I do realize this relationship will have to take a longer time to develop because of their shared history and the age difference. I liked Savannah’s self-awareness of their relationship’s evolution. First, she knew she needed to be older before he’d take her seriously as a potential love interest. Then, she knew that no decent grown man would look at a teenager that way so she knew she needed to wait longer. She thought hitting 21 would be that magic number but then she realized Adam sees her as a co-worker and friend, and that there was a strong possibility that this was all she’d ever be. But even as she’s resigned herself to this fact, she’s still in love with him. When she goes on a date with another date, even though she likes that man, she still compares him to Adam. She likes sex but she prefers not having the complications of a relationship to go with it… and I can only infer that this is because of Adam. I really hope this gets addressed in future books because even though scenes are like this are great:

I lifted my fingers, making them spark.

“Hey, two can play that game, remember.” He made a fist, then spread his fingers, the tips glowing red. “And mine leave bigger burns.”

I flicked sparks at him, then jumped out of the way. My leg caught on the covers, and I stumbled. Adam yanked and I went down, crashing to the floor.

“Hey yourself.” He plucked his T-shirt, pointing out the pin-sized holes from my sparks.

His brows arched. “You bought it for me.”

“Um, yeah. That’s the idea. Give you ugly clothing. Laugh behind your back when you wear it. Been doing it for years. You’re a little slow on the uptake.”

I’ve been waiting a long time to see their relationship change into something more, and I’m pretty sure I’m not the only one.

Readers should be forewarned that Waking the Witch ends with a big change in Savannah’s life, one that can be interpreted as a cliffhanger. Otherwise, I really enjoyed this read and find myself looking forward to the next installment in the series, Spell Bound. This book doesn’t really require much previous knowledge, although some subtle nuances might be missed regarding the politics of the world and Savannah’s backstory, so I think new readers can pick it up with not much problem. I wasn’t as enthused by the plot as I could be, but the personal interactions were ace, as usual. Oh, and great cover by the way. B

→ Jia
Previous article: REVIEW: Last Night's Scandal by Loretta Chase
Next Post: REVIEW: All I Ever Wanted by Kristan Higgins