I think the blurb gives a fairly good feel for what kind of read this will be, but even so I don’t think I was prepared for the emotionality of it. The story is told in the first person present tense. The purpose of using this tense, generally, is for immediacy. The reader feels like she is there with the narrator and this is a powerful example of how effective the tecqnique can be. 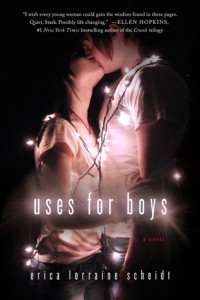 Anna began constructing her own stories, first to her stuffed animals and then to herself, as if she were narrating a story to a friend that she never had. When she encounters her first intimate touch at the age of 13 on the school bus, Anna started spinning stories of the boy who touched her and how that touch made her feel loved, wanted, special. The stories that Anna told herself weren’t in synchronicity with the ones that were told about her – how she was a slut, easy, and accessible.

She is as desperate for love and attention from a female friend as she is from the boys she encounters. Anna thinks she finds a friend who recounts stories of a relationship with a perfect boyfriend that takes her to parks and concerts and Anna is so incredibly envious of that. In her short life, there are just so few people who will love and protect her. Her mother is absent, both in mind and body, and at age 14 Anna can nearly set up house with another boy in the same residence as her mother but without her mother’s notice. The story was so heartwrenching in places, I had to take breaks.

I needed it to turn around for Anna and by the end, we were on the road to somewhere more hopeful but the movement toward something positive away from her heartbreaking tragedy was uneven. I also think the blurb gives the idea that there is a greater romance here than is included. And I don’t think Sam teaches her anything. It’s what Sam has, how he lives, that provides her hope. It’s his mother’s strong involvement in his life that Anna responds to. She wants to please Sam’s mother almost as much as she wants to please Sam himself.

I was convinced at the end of the book that Anna had come to a sense of self worth that she hadn’t begun the book with but it was self worth gained at a steep price. I read a number of reviews that called Anna a slut and a whore and I was so sad because the entire story was about how a young girl pursues sexual intimacy because that is the only way she can find the love feeling she misses in her home life. Anna isn’t a slut or a whore at all but a girl who is incredibly lonely and wants only to be loved. She thinks love is whenever someone touches her or pays attention to her and the only people that do that are boys, some who think they love her back and some who use her and some who even rape her. Interestingly, I think Anna has intimate relations with 4-5 boys in the story. But I guess her age and the fact that she participates in sexual acts with more than one boy makes her a slut or a whore.

I almost learned more about females from reading the various responses to Uses for Boys. It’s almost like a Rorsach test. It’s not that this book is perfectly written. The deep stream of conscious, often stilted prose can prevent some from connecting. Anna’s narration is disjointed at times, sometimes skipping backward in time without a clear signal. But the story itself is a powerful one even if imperfectly written. B

→ Jane
Previous article: Tuesday News: A bookless library; a glimpse at the technological divide from a former inmate; self published author declares Amazon is after the indies
Next Post: Dear Author Book Club – January 2013 – One Small Thing by Piper Vaughn , M.J. O’Shea