REVIEW: Until Series: Until November (Until #1) and Until Trevor (Until #2) by Aurora Rose Reynolds 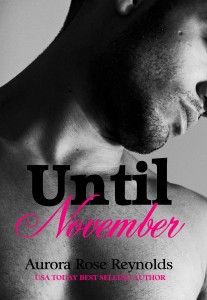 Yesterday, while browsing at Amazon I came across book one in your Until series, called Until November. I sent myself a sample and really enjoyed it. I found your voice to be deeply reminiscent of Kristen Ashley, whose voice generally works very well for me. While I do think that the books had some editing issues, they worked quite well for me and I found myself reading both in one day.

In Until November, November has fled New York to Tennessee after a brutal attack that left her with significant injuries. Her father, who she’s never really known, is in Tennessee and he’s willing to have her work as the office manager at his strip club. She’ll get him organized and then work from home. While there on the first day, she leaves the club and is confronted by a brawny, good looking guy, who assumes she is a stripper. This is Asher Mayson. He’s irritated that this new, hot young stripper doesn’t know that as a stripper, she’s always to have an escort to her car. Of course, he’s embarrassed when her Dad comes out and introduces him to his daughter, November.  Asher immediately begins wooing November.  Wooing seems to involve a lot of bossing her around, interspersed with some very sweet moments. One night, while out with Asher, November comes home to find her apartment trashed and a threat on her wall. Perhaps her mugging in New York wasn’t random. Asher immediately insists that she come home with him. As they spend more time together, the further they fall in love. But the threat to November might be more real than expected. Will Asher be able to protect this woman he’s come to love so deeply?

I really enjoyed this book, despite a number of issues. I loved how deeply Asher felt for November. He’s all about caring for her, and making sure she has what she needs. That being said, he’s also an overbearing pain in the butt sometimes. But, as a fan of Kristen Ashley books, I’m used to alphaholes, so it didn’t affect my enjoyment of the book at all. The book is in need of some serious editing, so readers who find that badly copy edited books irritate them will most likely find the errors enough to turn them off reading the books. But overall, this book was spicy hot, had a heroine with a spine and a hero who was dominant, but had a deep core of caring for the heroine. Final grade: B 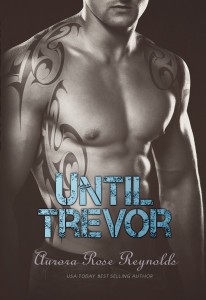 After finishing Until November, I immediately went back to Amazon and bought Until Trevor. Trevor is Asher’s brother. He’s known Liz, November’s closest friend in town, for years.After one hot night together when Trevor stopped just before having sex with Liz, he’s put her off. Hurt and angry, Liz has decided to date another man. Unsurprisingly, this doesn’t sit well with Trevor, who immediately puts all of his resources into running the guy off and reinstating himself as the only one for Liz. She’s confused and furious with him. He doesn’t want her, but he also wants no one else to have her? That’s crap. She gets right in his face and confronts him about it. He tells her that he’s always cared for her, and that he was scared because she’s so innocent. Then he sets about making her as experienced as possible.

While this book wasn’t as well written as the first, I also enjoyed it. Liz is relatively namby-pamby, which detracted from my enjoyment. She wants Trevor and cares for him, but spends alot of time fighting what seemed like needlessly to me. Trevor is a good guy. He’s a stud in the sack, and while he does occasionally go into “alpha-overdrive”, as a reader, I never doubted that he cared for her. The sex scenes are smokin’ hot, which I really liked. The series definitely has apparent series bait in each of the Mayson brothers, but I found myself excited for the next book. Again, the book is not perfect. There are a number of editing issues, and I found this one a little harder to read. But overall, I think that readers who enjoy uber-alpha heroes will find something to like in Until Trevor. Final grade: B-