PLEASE NOTE: It’s almost impossible to discuss this novel’s strengths and weaknesses without giving away spoilers, so if you prefer not to be spoiled, read no further.

I don’t generally read crime novels, but the description of Untamed Shore as a “novel of suspense with an eerie seaside setting and a literary edge” intrigued me. I was even more interested in it because of your authorship, since I adored last year’s Gods of Jade and Shadow. Untamed Shore represents your entry into a different genre so I had some trepidation, but my love for your voice won the day and I requested the ARC. 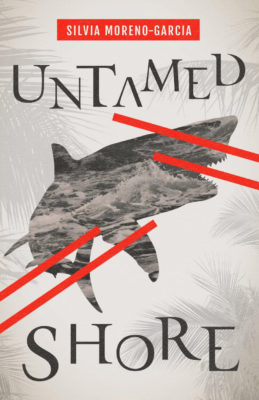 The year is 1979. Viridiana is an eighteen-year-old girl living in Desengano, a shark-fishing village in Baja California, Mexico. She is bored and restless. Her father lives in Mexico City, a place that seems glamorous to Viridiana, but he and her mother divorced when Viridiana was very young and he has pretty much moved on with a new family.

So Viridiana is stuck in the small village where everything is familiar, boring and confining. Her mother and a friend of her mother’s both expect Viridiana to marry Manuel, her sometime-boyfriend and the friend’s son. Viridiana has recently broken up with him, though—he did not attract her that much and she wants to escape from her humdrum life, not to be trapped there bearing child after child like her mother.

Viridiana takes after her translator father and has taught herself four languages with the help of books that belong to Reynier, an old Dutch ex-pat. Her language skills allow Viridiana to work as a tour guide during the tourist season.

This year, though, Reynier offers her another opportunity. Three Americans are coming to visit and have reserved a villa. If Viridiana will stay with them (she’ll be given her own room) and assist Ambrose, one of them, with clerical duties as well as translation, she’ll be paid handsomely. Despite her mother’s misgivings, Viridiana accepts the position. Not just for the money, but also in the hopes of alleviating her boredom.

The three ex-pats are Ambrose, wealthy and middle aged, Daisy, his charismatic wife, and Gregory, Daisy’s good-looking younger brother. Viridiana develops a crush on Gregory fast, and he does not seem immune to her either. He comes to her room one evening and things get hot and heavy, although Viridiana refuses to go all the way. She does not want to end up pregnant, like her mother, or to buy condoms at the drugstore since the village is small and everyone knows everyone else’s business.

Viridiana is less keen on Ambrose than on the other two. Unlike Daisy and Gregory, he has made no attempt to befriend her and Viridiana witnesses him lashing out at Daisy on one occasion. He also does not have the movie-star allure that the others possess. And when Ambrose warns Viridiana that Gregory and Daisy are parasites, she remains unconvinced. Daisy is alternately friendly and cold, but by this point, Gregory has promised to take Viridiana to Paris.

One day, Daisy, Gregory and Ambrose plan an excursion to the beach and Gregory suggests that Viridiana accompany them. Prior to this, Gregory and Viridiana have been to another beach by themselves. She is perturbed, therefore, that the beach they have in mind for this outing is the one she cautioned Gregory against because it has a dangerous undertow. The party ends up returning home without getting into the water but Daisy is miffed with Viridiana for her warnings.

That night, Viridiana wakes up to the sound of an argument. A scream jolts her and when she ventures to investigate, she finds Ambrose at the bottom of the stairs, badly injured or possibly dead, with Gregory kneeling and checking his pulse and Daisy staring at her and saying that Ambrose fell.

Viridiana goes to fetch the doctor, who pronounces Ambrose dead. She notices that there’s a scratch on Ambrose’s face and that Daisy has broken one of her nails. Daisy and Gregory say that Ambrose fell because he was drunk, but Viridiana has never known him to drink.

Will Viridiana remain under Gregory and Daisy’s spell? Can she betray Gregory’s trust by going to the authorities, such as they are in this tiny village? Can she trust him in turn?

Despite the absence of dark, rain-slicked streets or a cynical, jaded detective, Untamed Shore evokes the noir genre. It is clear to the reader that things aren’t what they seem, but Viridiana deceives herself and that places her in danger.

There’s something cinematic that I love about your writing. It is easy to visualize the beach with its shark skeletons, the small village, and the desert that borders it. The period details are authentically 1979, and I loved the way certain motifs recur, like the bezoar stone that Viridiana imagines lodged in her chest, or the quotes from classic cinema matinee idols that she has memorized and occasionally voices.

At bottom, this is a coming-of-age story. Viridiana is book smart but not street smart. She has a touch of innocence, of faith that things will turn out all right. Throughout the book, she is faced with red flags, and for much of the novel she disregards them in favor of her illusions. This is understandable, given her youth and her desire for the escape to Paris that Gregory has promised her, but I felt that it went on too long.

The book is written in third person but Viridiana’s is the only viewpoint and so the novel depends on the reader’s ability to connect the dots before she does. She never comes across as unintelligent but she does come across as dreamy, and she makes a lot of decisions that place her further and further in need of denial, until the only reality left for her to awaken to is brutal and frightening. There were multiple times when I wanted to shake her.

The other characters are portrayed with acuity. A vivid picture of each emerges. Daisy and Gregory’s warmth doesn’t make them kind or principled. Ambrose, even when dead, is hard to sympathize with. Viridiana’s weary, wary mother, her unappealing stepfather, and her ex-boyfriend, Manuel, with his conformity to his mother’s wishes, seemingly conspire to trap Viridiana in Desengano. Ambrose’s unattractive boy scout of a nephew, Lawrence, also shows up, perhaps the man who will get to the truth or perhaps a mark for Viridiana’s friends.

For all that this is a suspense novel, it isn’t fast-paced or filled with gunshots. Instead it features the kind of insidious suspense that grows more and more taut as the hot days of a dangerous summer wear on. And we know that no matter what the future holds, this will be the experience that defines Viridiana—that is leading her to the person she will be in adulthood.

When her eyes open and her illusions fall away, it is the culmination the book has been drawing near to. The ending was satisfying and I loved it. B.

→ Janine
Previous article: REVIEW: Do I Have to Wear Black to a Funeral? by Florence Isaacs
Next Post: Reading List by Jennie for October through December, Part One